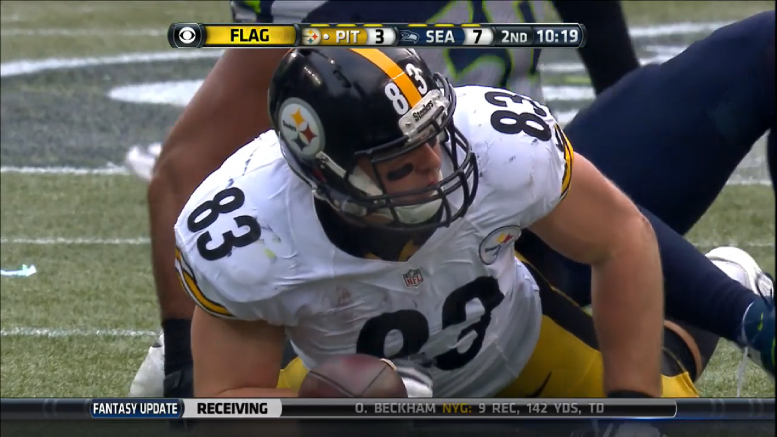 In the game that Pittsburgh Steelers tight end Heath Miller moved into sole possession of sixth place on the franchise’s all-time yards from scrimmage list, his exit with a rib injury may have also given us a glimpse into the not too distant future.

For the first time all season, the Steelers had all five tight ends and fullbacks on the roster both healthy and active for a game, including veteran second tight end Matt Spaeth returning from injury. Rookie Jesse James, first-year fullback Roosevelt Nix, and fourth-year fullback/tight end Will Johnson were all active, and all contributed.

In fact, each of them caught at least one pass during the game. Of the group behind Miller, James was the leading receiver entering the game, and he had only been active for the first time during the team’s two previous games, due to Spaeth’s absence because of injury.

James made his debut in Week Nine, and he caught two passes for 13 yards and a touchdown. He had a two-yard reception the following week, and added a reception of eight yards on Sunday to give him four catches for 23 yards on the year.

The fullback, Nix, caught his second pass of the season during the game, the six-yarders giving him 16 yards on the season, while Spaeth’s six-yard catch was also his second and put him at 10 total yards on the year. Johnson caught two passes, his first two of the year, for a combined 16 yards.

Of course, all of that combined adds up to just five receptions for 36 yards, a level of production bettered by Miller himself by the time he exited the game with a rib injury in the second quarter. But there will come a time soon when his production will need to be replaced.

The veteran tight end just turned 33 and has one year left on his contract. Spaeth is right behind him, having just turned 32, and 2016 is also the final year of his contract. It is uncertain if they will see a contract extension beyond that, if their bodies can sustain it.

Spaeth in particular has struggled to stay on the field. Since returning to Pittsburgh in 2013, the ninth-year veteran has missed 16 games due to injury, including the first 12 games of the 2013 season, on which he was on the short-term injured reserve list with a foot injury suffered in training camp.

Admittedly, Miller has been surprisingly reliable over the years, and has only really missed much time at all due to significant, and not nagging or chronic, injuries. Last season, he led the league in snaps played at the tight end position, and this year, he still ranks in the top 10, approaching 700 snaps played on the season.

But there is a reason that James, Johnson, and Nix are all on the 53-man roster, and it does go beyond their special teams contributions. There is a reason that when Miller left the game, James took his place and Spaeth remained in his role. The Steelers know the future that they are planning for, and they know James is a part of it. And they know it’s not so far away.