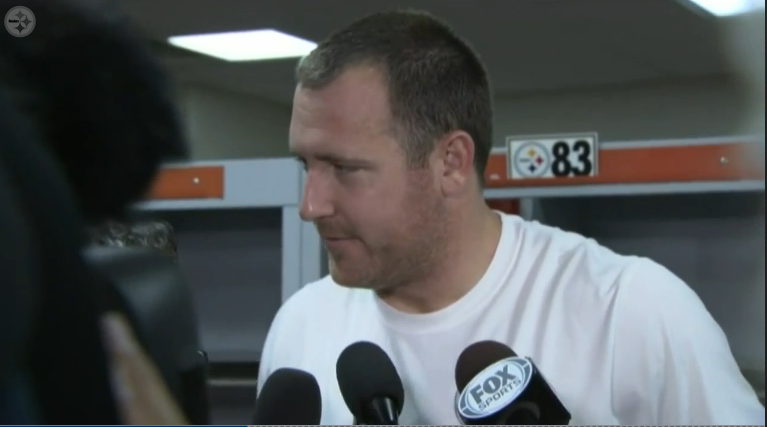 The driving story will be the Pittsburgh Steelers’ 33-20 win over the Cincinnati Bengals, a near must-win for a team keeping their playoff hopes alive.

But right on its bumper will be all the extra that happened in this game. The pre-game skirmish. The post-snap fights. The inevitable Twitter spars.

But to Heath Miller? All he cares about is the game and the win.

“I don’t know. Between the whistles, we know it’s going to be physical,” Miller told reporters after the game, shrugging off the question of if the Bengals were dirty. “What happens before or after, I don’t pay much attention to. Because it doesn’t matter in the game,”

Miller just went to work, snagging 10 passes for 66 yards. Most of his catches were contested, taking big shots in an effort to keep drives alive. He doesn’t enjoy the life of a big-play wide receiver, working in open spaces and generating a sexy box score.

In a way, he’s an offensive lineman. And the Steelers front five basically treat him as such.

It’s not too often an offensive lineman calls a skill position a “warrior.” But it’s nothing short of accurate for 83.

“His actions speak louder than his words. Making those catches in traffic with his short ribs. He’ll never say anything, never complain about it. Just one of those guys you look up to and try to mirror the way he plays the game,” DeCastro added.

Miller missed last week due to a rib injury and was limited at the early portion of this week because of it. Though healthy enough to play, anyone who has ever had a rib injury knows the pain lingers for several weeks. After a physical game against the Bengals, you can bet Heath will be a little slow getting out of his bed in the morning.

You can also bet on Miller playing Sunday against the Denver Broncos. That’s the old-school, tough guy Steelers’ nation has come to expect.