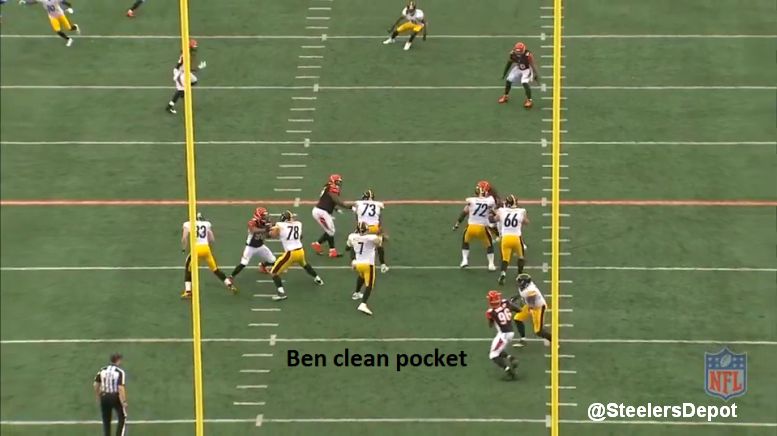 Your weekly game notes from the Pittsburgh Steelers 33-20 win over the Cincinnati Bengals.

– 6’9 Alejandro Villanueva goes down hard on the Steelers first pass of the day. Ouch.

– Pittsburgh brought back the pistol, something I haven’t seen for several games. 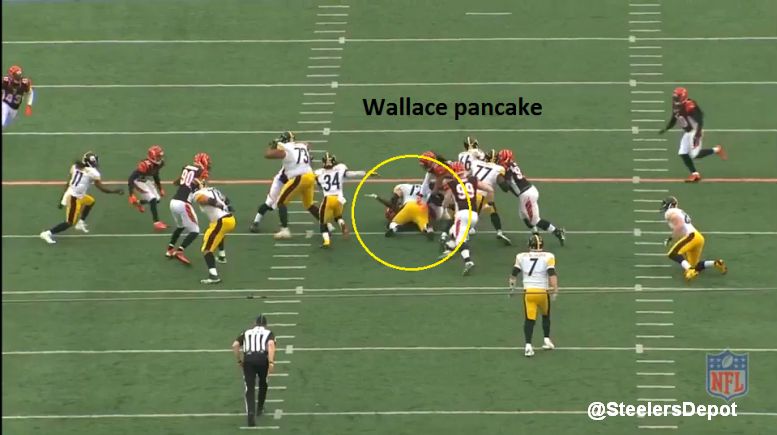 – Stack release with Antonio Brown and Darrius Heyward-Bey. Frees up AB to win on the dig and move the sticks. 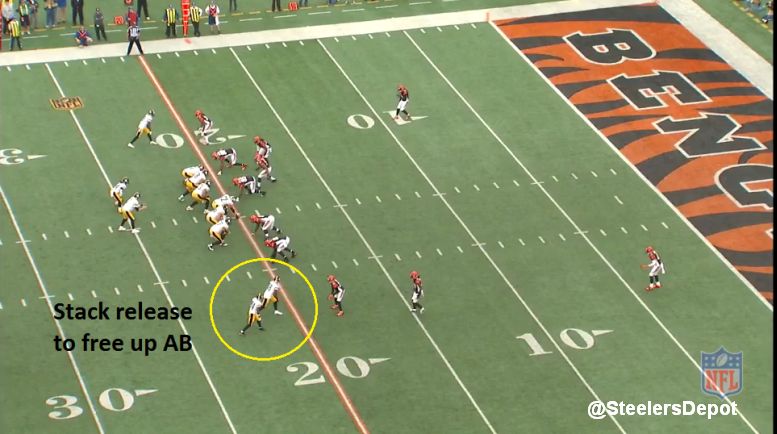 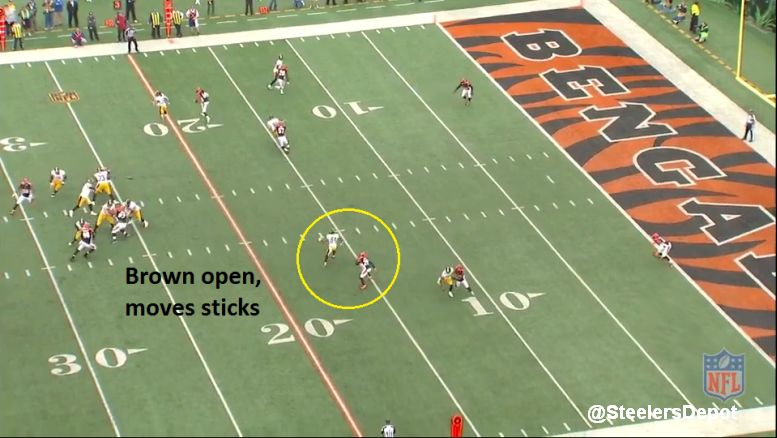 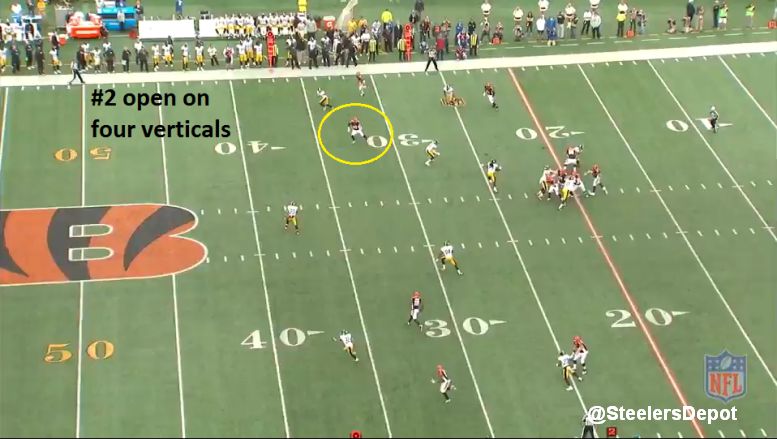 – Gotta squeeze this A gap better. Can’t let the running back through the hole as Jeremy Hill gains 12. Failure all around, not just on one guy. Run defense is a team sport. 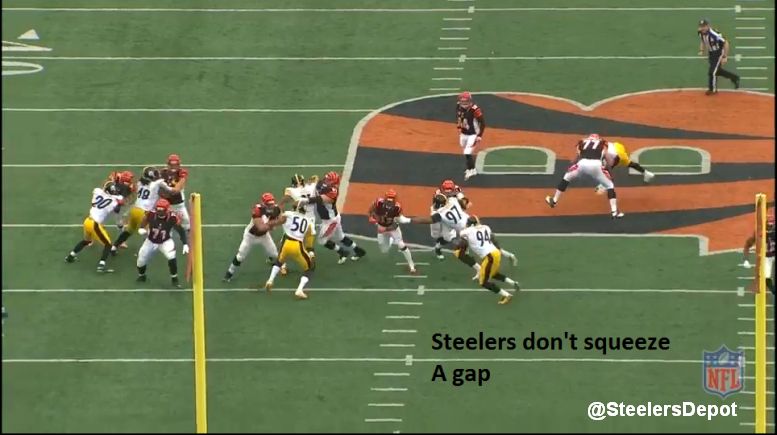 – Another A+ Marcus Gilbert combination block. Week and week out with him.

– When it’s Steelers/Bengals, even Antonio Brown is willing to get his nose dirty and crack Reggie Nelson in the run game. 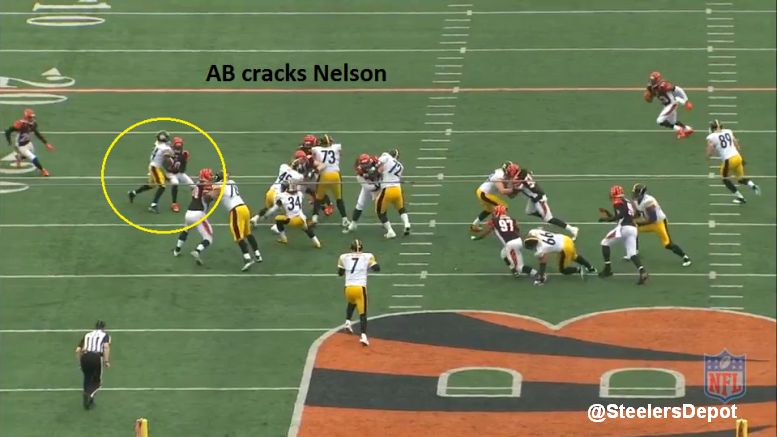 – Steelers really adding wrinkle upon wrinkle. Usually pair their RB screen with a drag from the slot receiver and here, they add in the out route to Martavis Bryant to the field, with Ben Roethlisberger finding #10 and getting the team in FG range. Great timing throw from a longer distance than you think, throwing this from the far hash.

– You might not think Stephon Tuitt is playing well because his sack totals have dipped but he’s still showing up on tape. Swims over the right tackle, makes the tackle. 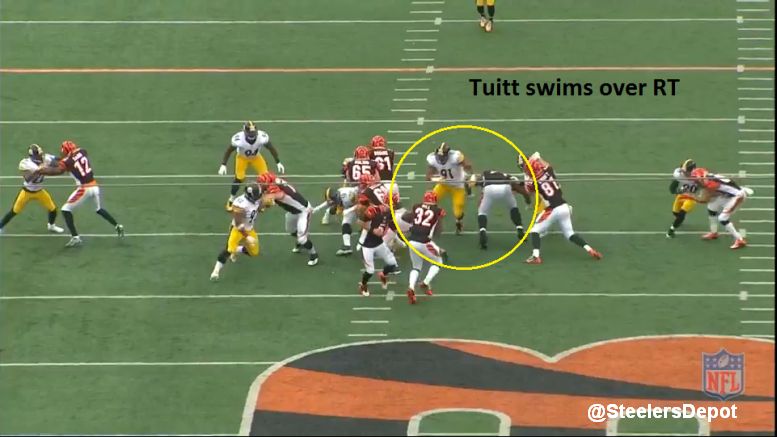 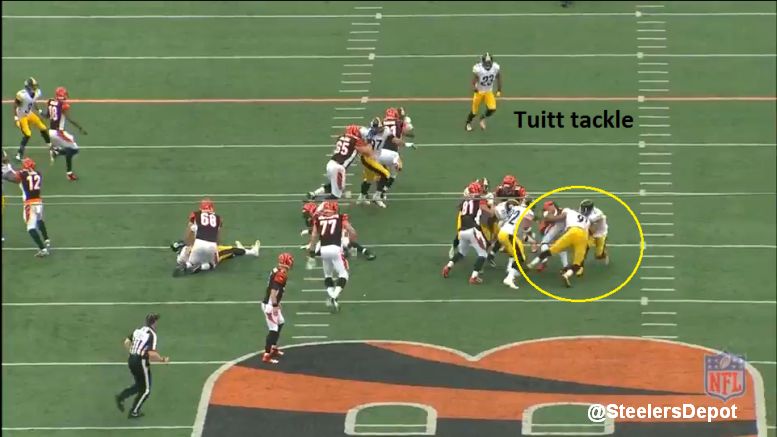 – Interesting way to pay Cover Three out of Dime. All three safeties take a deep third. Four underneath. 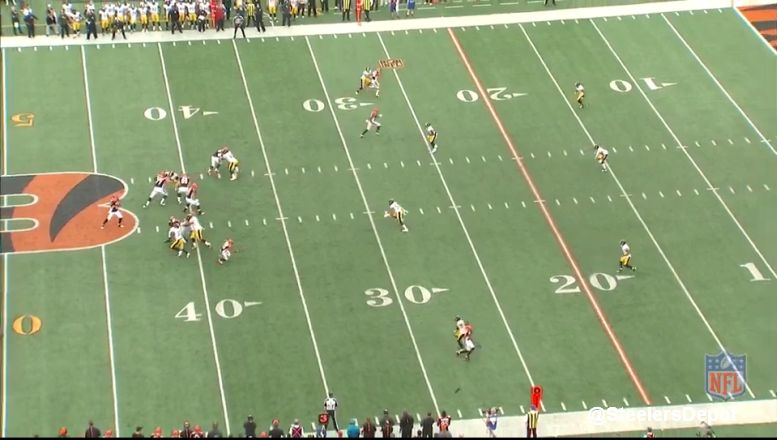 – Cam Heyward has incredible timing on field goals. If he was one gap down, he blocks this one. 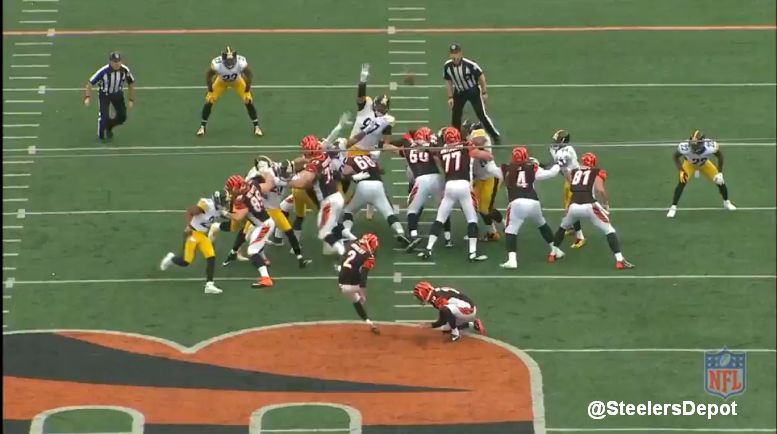 – Key blocks on this dart run. The pulling Villanueva meeting the LB in the hole and David DeCastro’s down block on the one tech. Good seal to create the alley. 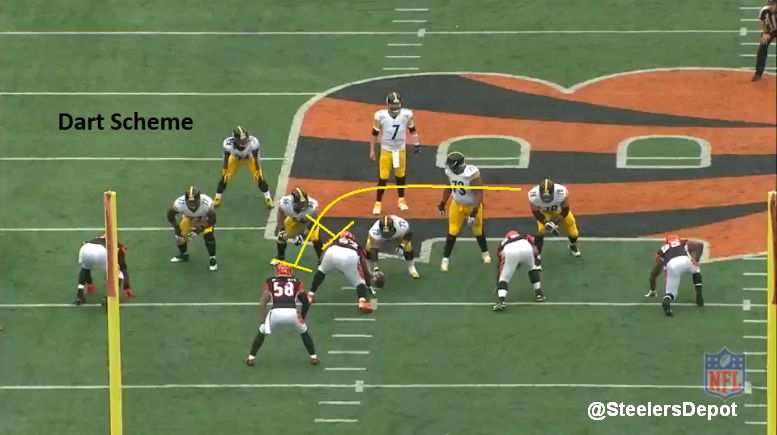 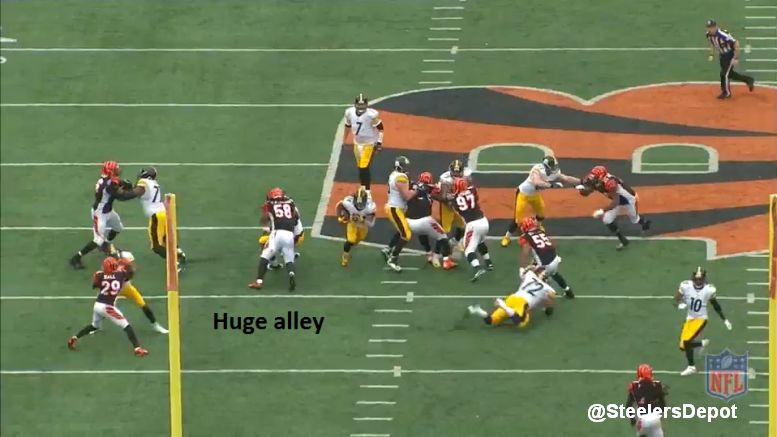 – Saw some people complaining that Mike Mitchell should’ve given help on A.J. Green’s 66 yard touchdown. And he does his best. Opens his hips to that side on the snap. Just can’t close in time. Not his fault, though, you would’ve liked to see him make the tackle. Blake’s inside leverage pre-snap also tells you he can’t be expecting safety help. 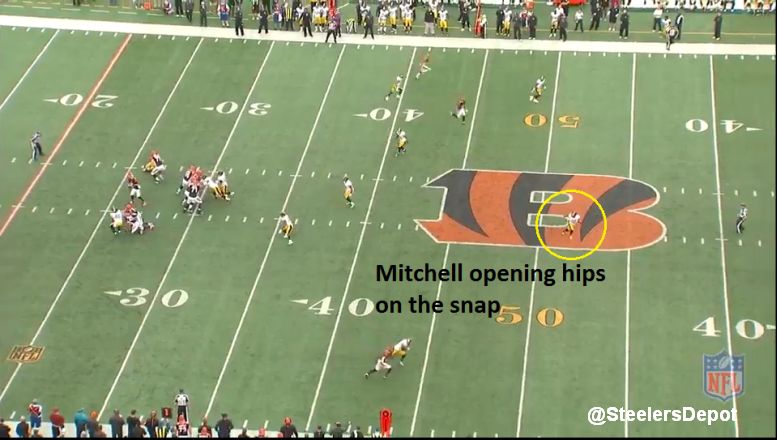 – Ramon Foster again working his tail off to get down the line and throw a block on this Heath Miller screen, springing him for a gain of nine. 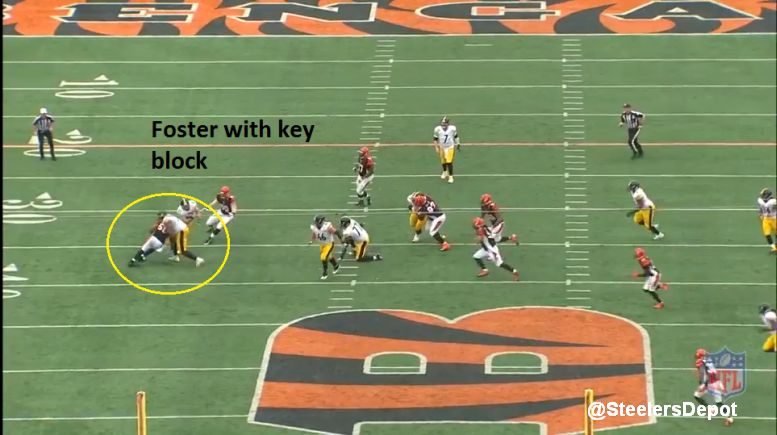 – Big efforts from William Gay, Lawrence Timmons, and Ryan Shazier. Gay sets the edge, Timmons works off the block and slows down Hill, Shazier scrapes and cleans it up.

– Steelers fixed their bubble screen. Good coaching/adjustment. Stuffed at the LOS early in the game. They switch Wheaton and Miller’s assignments, making it easier on Miller, and Bryant gains 18. 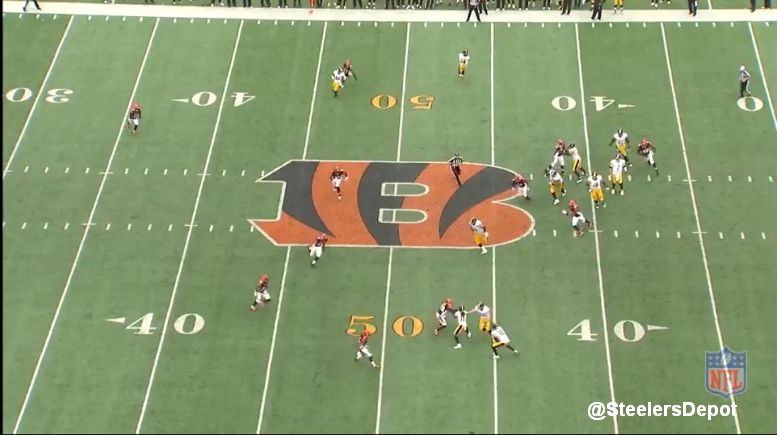 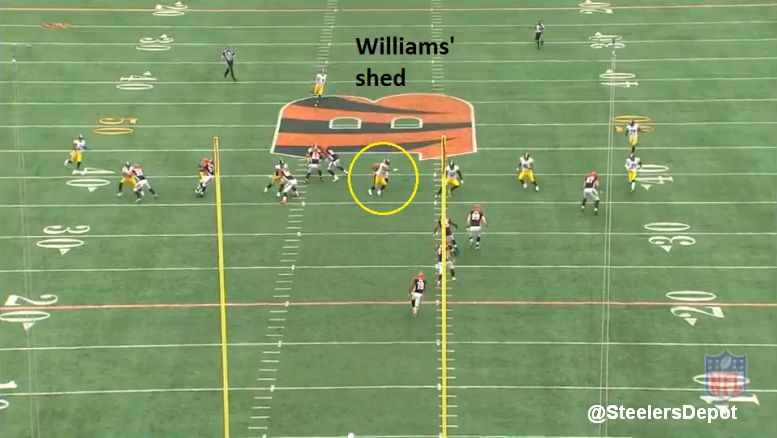 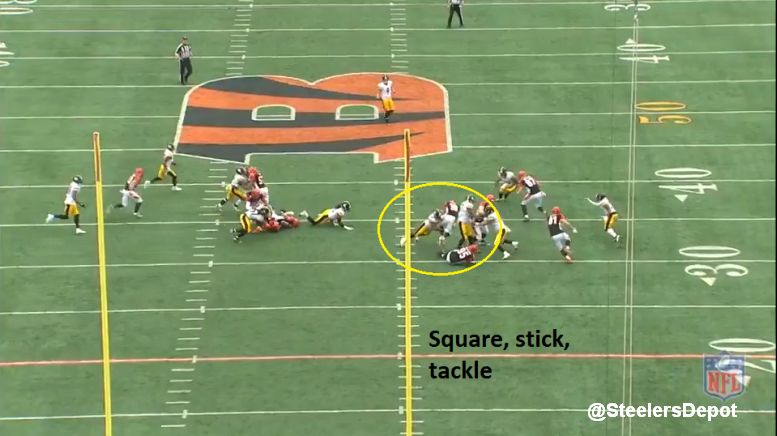 – Love how James Harrison can just run through this chip without it barely even affecting him. Still overpowers the left tackle.

– Steve McLendon gets hit, uh, low, by Will Allen. Ouch. 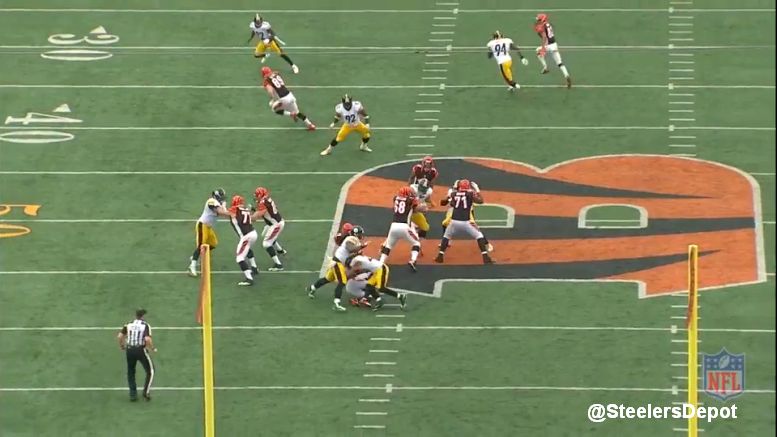 – If a WR jumps this high to make the catch, you gotta make him pay on the way down. Can’t allow a clean landing. 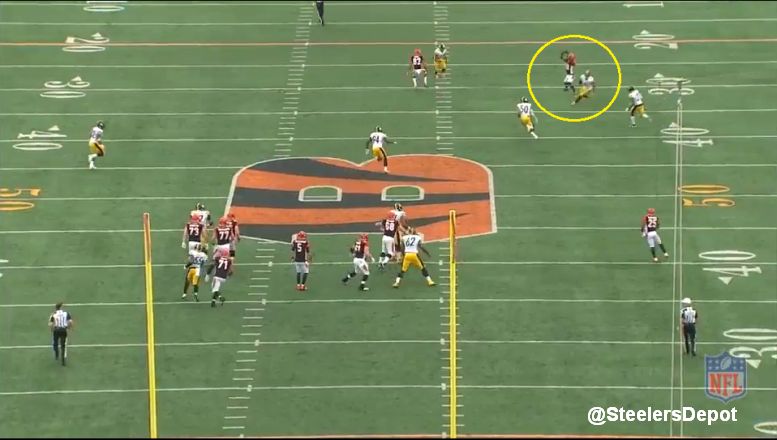 – That rip by Deebo. Not even a great LT like Andrew Whitworth can stop it. 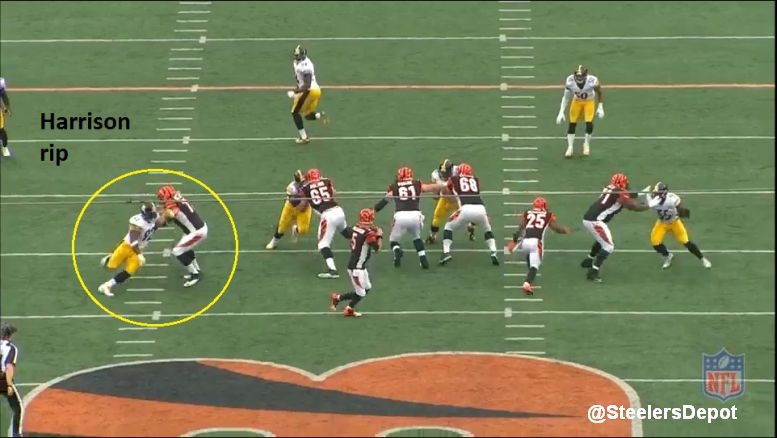 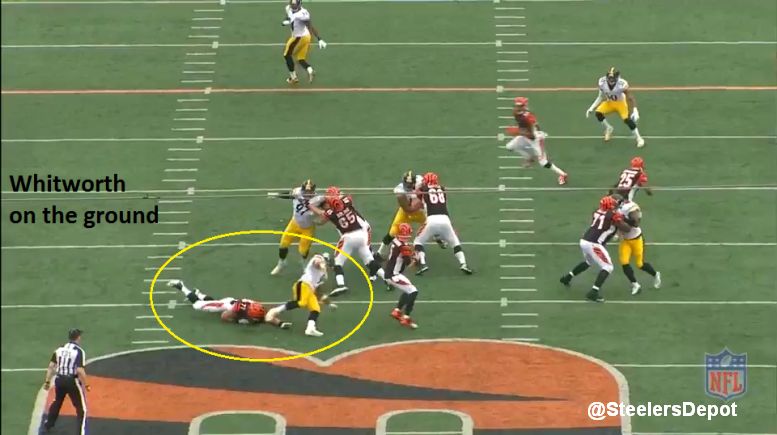 – Steelers played a lot of Cover 2 Sunday. Force a young quarterback to make some difficult throws, try to win with the intermediate routes. Not going to play as much Cover 3 and allow the dump off.

– Punt coverage team. DHB and Shark the gunners. Golden the upback. Nix/Allen the wings. On the line: VW-Garvin-Greg Warren-Will Johnson-Spence. 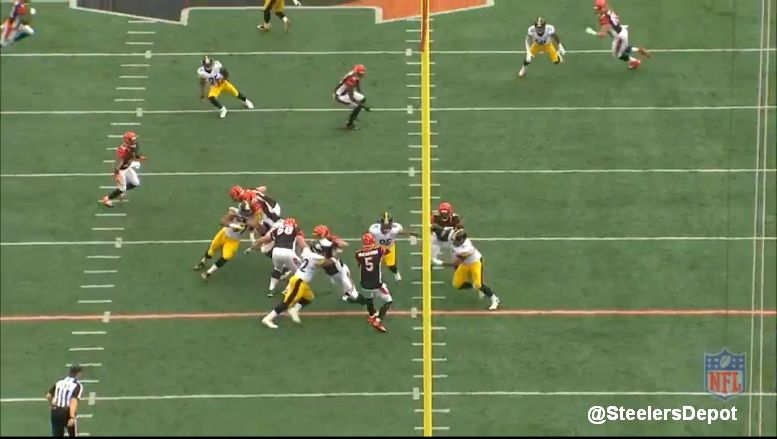 – Mike Mitchell needs to get on top of #1 vertical. CB passes him off but Mitchell didn’t pick it up. 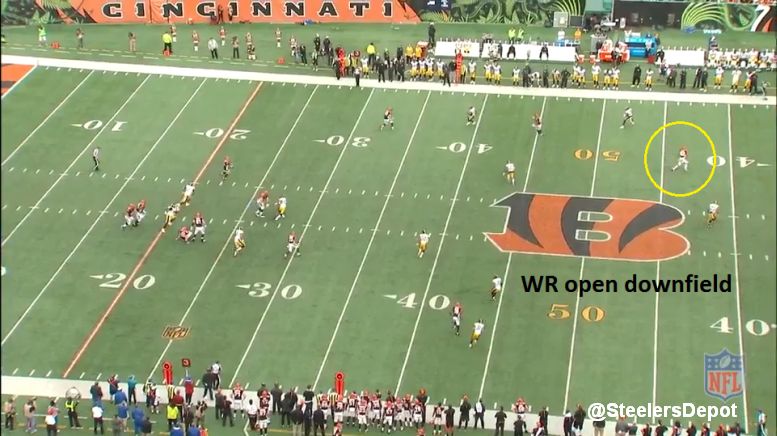 – Too many Steelers trailing on this AB punt return. Gotta get on a hat. 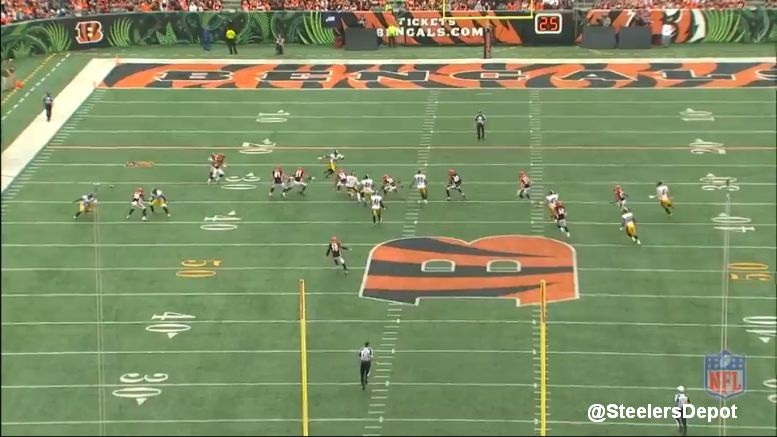 – Again, Steelers throw a bubble screen to the field, and they’re asking too much out of the right tackle to make the block. Lot of ground to cover versus a LB who has out leveraged him. Gotta clean that up. 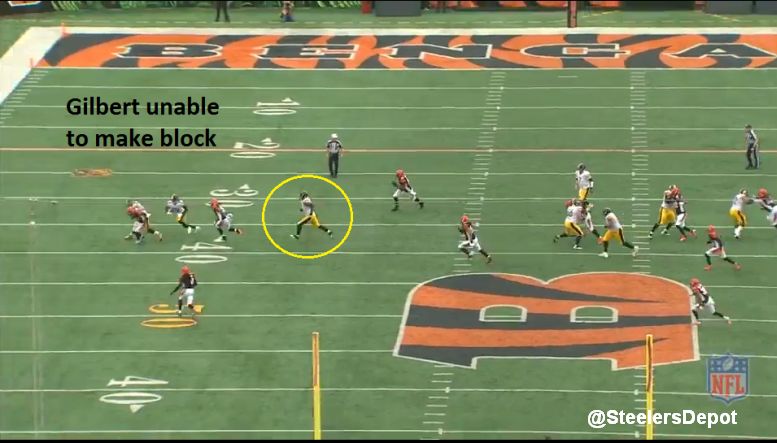 – Fake the bubble to go vertically but it isn’t open. Kudos to AB for working the scramble drill, picking up the first, and a lot more. 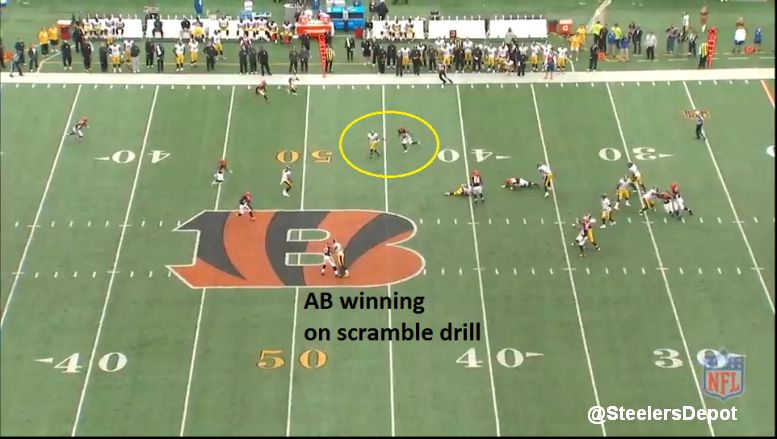 – Credit to the offensive line for giving Roethlisberger an incredibly clean pocket for several seconds. And nice play by Wheaton to find the soft spot and sit down.

– Boykin is a good tackler. No idea where/how the narrative that he wasn’t came from. Luckily, that hasn’t come up very often on here.

– Strong cut block by Heath Miller on this split zone. 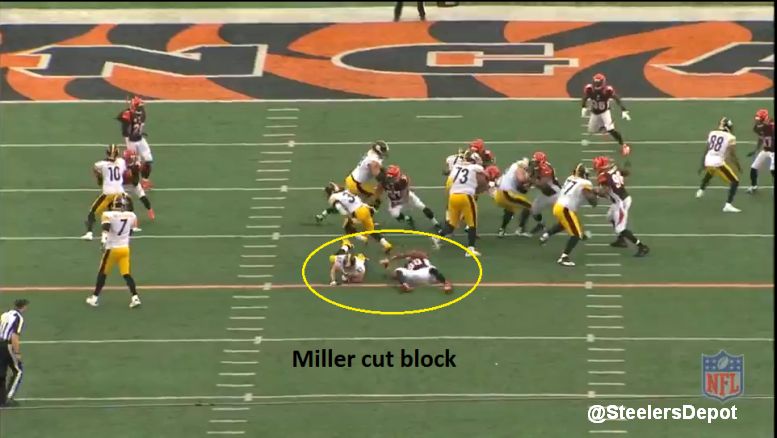 – Love, love, love this reach block by David DeCastro. Quick first step to gain leverage. Poor technique by the DT Pat Sims but kudos to 66 for gaining leverage. Not as easy as he made it look. Leads to the Steelers’ final TD.