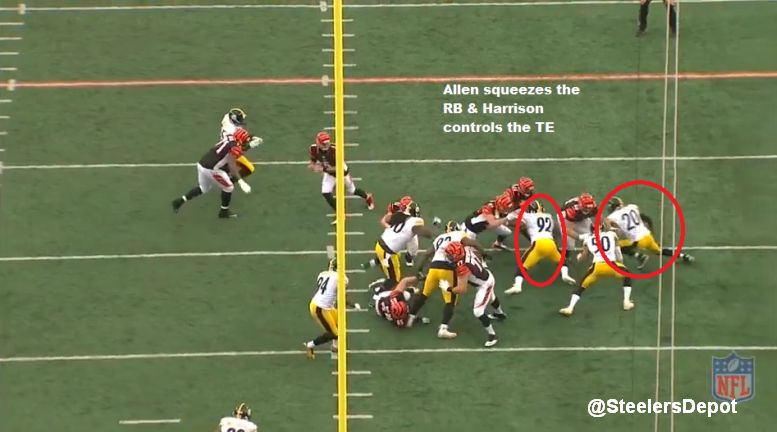 Once again we will be diving into the middle of the trenches. This time however the view will be from the defensive side. Similar to the offense line ratings, there are ones for the defensive line as well. To start James Harrison, Steve McLendon, Cam Heyward and Stephon Tuitt will be graded. The Steelers come into this pivotal week 14 matchup, against the division rival Cincinnati Bengals, needing a win. They would need a big performance by their front seven and especially the three interior down lineman to slow down this explosive Bengals offense. The front seven is anchored by veteran 5 technique Cam Heyward on the other side is the second year player out of Notre Dame Stephon Tuitt. Heyward is playing at a Pro Bowl level and Tuitt is not far behind him. The Steelers would need more than just a good performance from the down linemen to stop this offense.

One of the biggest plays of the entire game, proved to be this 2nd & goal at the five yard line in the first quarter. The stage however was actually set two plays prior. 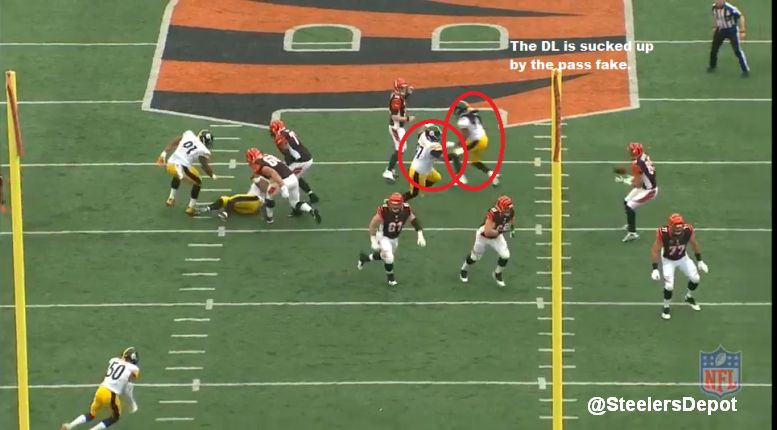 Tyler Eifert caught a screen pass and took it 24 yards down the field for a first down. With a small convoy the Steelers front had bitten hard on the fake.

So clearly Stephon Tuitt had the screen play on his mind. Not very often will a team leave running backs 1 on 1 with Tuitt. When he saw this he had to think it was a screen pass. Then for Tuitt to have the wherewithal to not only locate the ball but intercept it, and start running downfield, is amazing. Truly an incredible play by the second year defensive end.

This 1st and ten ends up being the long touchdown to AJ Green. A big part of that touchdown was the fact that AJ McCarron had a clean pocket to throw out of. Let’s take a look at why the Steelers couldn’t get any pressure. To the left of our screen we have Jarvis Jones who is a half-step slow off the ball snap; then ends up losing an edge and gets nowhere near the quarterback. Cam Heyward runs into a double team. Bud Dupree doesn’t feel that he is being set up and almost runs himself out of the play, all it takes is some contact from the tight end and running backs. This lack of pressure makes it an easy pitch and catch for McCarron.

2nd & 7 and the Bengals come out in and shotgun 11 set. The Steelers do a simple four man rush and three of the four rushers get very little pressure. However, James Harrison shows why, even at 38 years old, he is a great pass rusher. Harrison gets a good jump on the snap but flashes his true gift. Harrison uses leverage and flexibility to turn an extremely tight angle; beat Andrew Whitworth, and get flat to the quarterback. This forces McCarron to step up and throw underneath making it a third down. Just another great play for the ageless wonder.

Here, on a long second down in the third quarter, is an example of the Steelers not getting home with four man pressure. At first it appears to be a standard 11 personnel formation but on a second glance, that tight end is actually backup tackle Eric Winston. Heyward runs into a literal triple team which allows the other three rushers to go 1vs1. Tuitt rushes to the outside and runs into the running back disrupting his route but eliminating any pass rush in the process. Arthur Moats fails to turn the edge against right tackle Andre Smith and just gets washed past the play. The only player who gets anywhere near the quarterback is nose tackle Dan McCullers, eventually beating the center and getting a hand in the passing lane. But it’s too little too late and the Bengals complete 21 yard pass on 2nd and 18th to keep their drive going.

1st & 10 in the middle of the 3rd quarter. Cincinnati comes out in a shotgun 11 personnel and runs a 22 split zone. Bengals center Russell Bodine gets a fantastic reach on Tuitt. Defensive end Jarvis Jones set an edge initially but then proceed to get swallowed up by the right tackle. The blocking was good enough on the right side for this play to have gained yards. However, the backside three technique Heyward crosses the face of the left guard Clint Boling. Then he gets parallel to the line of scrimmage and makes a sure tackle for no gain. This play eventually played a part in the Bengals going three and out in a key third quarter possession. 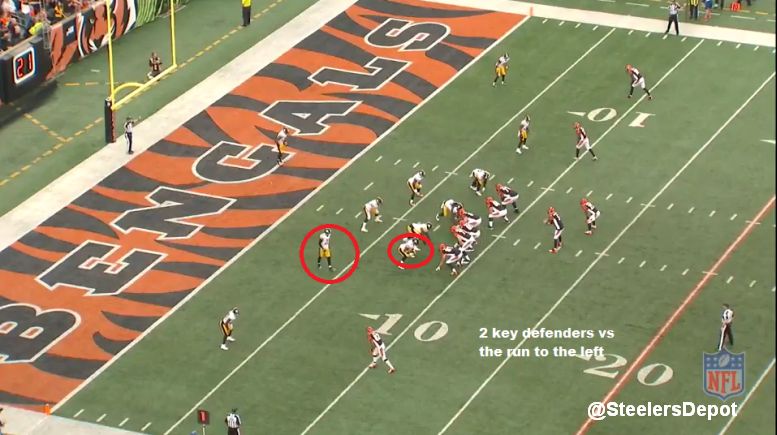 1st and goal at the 8 yard line with 12 minutes 18 seconds left in the 4th quarter the Bengals dial up a 25 power. Here we have James Harrison winning at the point of attack pushing tight end into the backfield and shedding him to make the tackle. On the outside we have Will Allen forcing down the edge and the running back inside. This combination allows the running back nowhere to go and he is tackled for no gain.

Although the Steelers gave up just under 400 yards the defense forced three turnovers. They also sacked the quarterback three times and hit him six times in total. The defense held the Bengals to a subpar 64 yards rushing.

A few players really stood out on the Steelers front seven in this game vs the Bengals. First and foremost, the consummate professional Cam Heyward showed up in all four quarters. He really sets the tone for the defense with his effort. The effect is obvious and is rubbing off quite a bit on Tuitt. The effort that those two down lineman show is incredible. I witness them both chase plays down from behind more than twenty yards.

Also I would be wrong if I didn’t mention the ageless wonder James Harrison. He showed why he is still the best edge rusher the Steelers have on their roster. He also set the edge and controlled tight ends in the run game. Altogether the Steelers front seven played well and had a few dominant moments. The potential to exploit a weak offensive line is there next week as the Steelers face the beat up Denver Broncos.