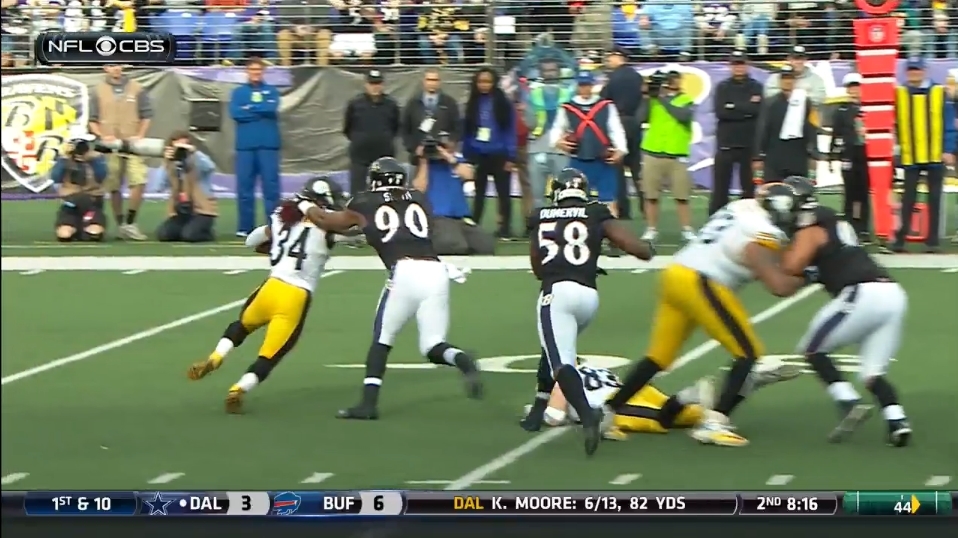 DeAngelo Williams ran all over the Baltimore Ravens Sunday, forcing the Ravens to resort to a creative way to bring him down.

Za’Darius Smith brought the back down by the hair for a four yard loss in the second quarter of yesterday’s game.

After the game, Williams was asked by reporters if he had any problem with the play.

“It’s not a dirty play. The hair is part of the uniform and because it’s part of the uniform it was a legit play. And I told the guy when I got up, ‘man, good tackle.’ And he was like, ‘man, you know that play is legal.’ I’m like, I’m not arguing with you, it’s a good play. He came off as if I was going to be upset about it. But no, it’s not the first time it’s happened to me. With my years in Carolina against Cliff Avril of the Detroit Lions.”

Williams isn’t the first Steeler to be brought down by the dreadlocks. You probably remember Larry Johnson dragging Troy Polamalu from behind many years ago.

It was one of the few times the Ravens’ run defense were able to drop Williams behind the line, who rushed for 100 yards and two touchdowns Sunday.

Here is the tackle from yesterday. Maybe Williams will go with the trendy man-bun look next week.