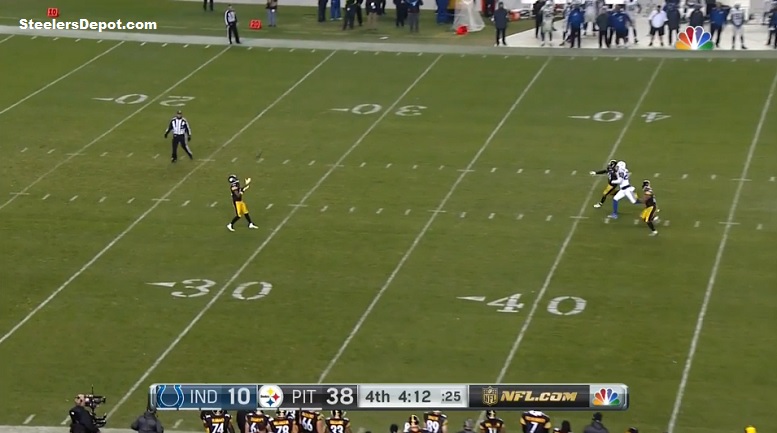 Late in the Sunday night win over the Indianapolis Colts, Pittsburgh Steelers wide receiver Antonio Brown produced an exciting score by returning a punt 71 yards for a touchdown. While most of the focus has been on Brown’s goal post celebration following that score, it’s important to also focus in on how the return was successful.

During his weekly interview on Steelers Nation Radio, special teams coordinator Danny Smith detailed Brown’s long return for a touchdown and how preparation and tape study played a part in it.

“It was a middle return and it obviously looked like one,” said Smith. “Sometimes those great players improvise and do different things, but that was blocked really well we had some indications about how they would play with the ball in the middle of the field. We called that particular play hoping that ball would be in the middle of the field, or to our right. If the ball had been kicked to our left, I don’t think the same result would’ve occurred. We had it narrowed down and those are things that you prepare during the week, or during the course of the week of where you think the ball’s going to be kicked and our return team did an excellent job and obviously he wasn’t touched.”

As you can see in the animated gif below, Brown really only needed two initial blocks in order to break the long return. Those blocks came courtesy of Shamarko Thomas, Antwon Blake and Robert Golden. It really looks so simple from the all-22 angle.

So, what did Smith think about Brown’s touchdown celebration with the goal post? He really thought Brown was going to do another forward flip.

“He hesitates at the 2-yard-line, the goal-line, like he was going to do the flip again,” said Smith. I haven’t even talked to him about it, to be honest with you, and then he takes off for the post.”