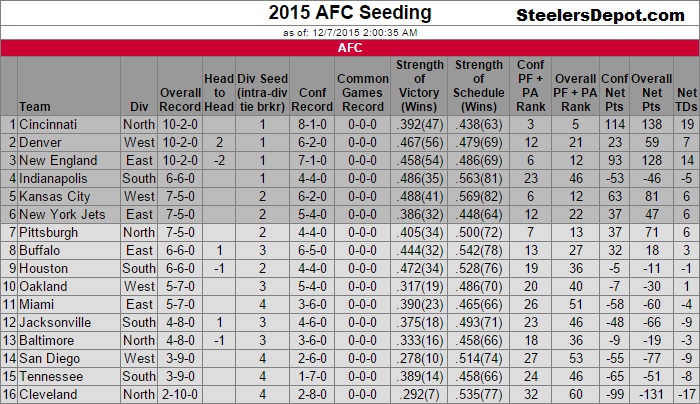 Even though the Pittsburgh Steelers took care of their own business in a big way Sunday night in their 45-10 home win over the Indianapolis Colts, they’ll enter Week 14 of the NFL season on the outside looking in when it comes to the AFC Wild Card race.

Thanks to the Kansas City Chiefs and New York Jets both notching wins on Sunday, the Steelers will exit Week 13 as the No. 7 seed in the AFC thanks to their 4-4 conference record.

When it comes to the two Wild Card spots in the AFC, the Chiefs are in the driver’s seat right now for one of them and especially when it comes to the Steelers being as they beat them back in Week 7. The (7-5) Chiefs also have a very easy schedule to close out the regular season as it includes games against San Diego Chargers, Baltimore Ravens, Cleveland Browns and Oakland Raiders.

The (7-5) Jets, who will enter Week 14 as the No. 6 team in the AFC, have a tougher remaining schedule than the Chiefs do and it includes games against the New England Patriots and Buffalo Bills. The game against the Bills, however, takes place in Week 17 and there’s a chance Buffalo could be eliminated from playoff contention by then if they don’t win their next three games. The jets other two games are against the Tennessee Titans and Dallas Cowboys in weeks 14 and 15 respectively.

The Steelers have two tough games in a row coming up as they’ll play the Cincinnati Bengals on the road next Sunday with a home game against the Denver Broncos the following weekend. The Steelers close out their 2015 regular season with games against the Ravens and Browns and both will be on the road.