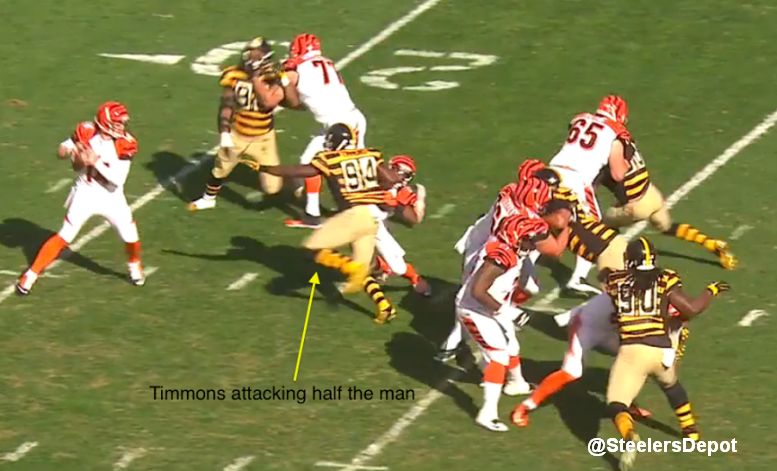 Much was made about the Cincinnati Bengals fearsome offensive line, and the remarkably low number of sacks (6) the unit had allowed heading into Sunday’s game against the Steelers. Instead however it was Pittsburgh that flipped the script, consistently pressuring Andy Dalton all afternoon while sacking him three times.

The first sack came from rookie Bud Dupree, as Dalton escaped the pocket on 3rd-and-13, allowing the outside linebacker to run him down from behind.

Steelers send five while the Bengals keep six in to protect. The one-man advantage allows Cincinnati to double Heyward, while running back Giovani Bernard does a great job picking up Lawrence Timmons (for once). Dalton has more than enough time to make a throw, but instead chooses to pull the ball down and escape a clean pocket.

You can see McLendon eventually swimming Kevin Zeitler to force some mild pressure, but Dalton still has time and opportunity to make a throw here. I couldn’t get the All-22 at high enough quality to show you anything other than blips in an image, but Antwon Blake lets A.J. Green behind him vertically down the right sideline, and it would have been quite a feat for Robert Golden to get there in time to make a play on the ball. Could have been a touchdown, but instead Dalton scrambles and gets dropped from behind by the quicker Dupree.

From a schematic standpoint, nothing particularly creative by Pittsburgh, just simply a miss by Dalton, who has shown a tendency to leave a clean pocket many times in his career. Credit McLendon for defeating his block and Dupree for hustling to work back into a play he was all-but run out of, but this one is on the Bengals quarterback.

The next sack again came on third-and-long, with the Bengals in need of a 15-yard gain to pick up a first down.

Pittsburgh sugars both A-gaps with every defender in a two-point stance. Keith Butler sends five and drops the strong side linebacker Arthur Moats into coverage. Bengals keep seven in to protect, with tight end Tyler Eifert check-releasing. Ryan Shazier and Heyward combine for a twist which Cincinnati picks up quickly, while Timmons comes flying through the weakside B-gap.

I talked about how the Bengals running backs struggle in pass protection in last week’s scouting report, and the Steelers took full advantage of Cincinnati’s weakness on Sunday. Timmons crashes through Bernard’s block, showing great awareness to attack half the man and maintain leverage to the quarterback.

Interior pressure causes Dalton to tuck the ball and step up in the pocket, where he is again chased down from behind by Shazier and Jarvis Jones, who each get half-a-sack on the play.

So again, even though Cincinnati was in position to stop Pittsburgh from a schematic standpoint, the Bengals weakness in pass protection was still exposed due to Timmons’ prowess as a pass rusher. Great effort and execution by all parties to bring Dalton down for the second time that day.

Following Ben Roethlisberger’s first interception of the day early in the third quarter, the Bengals were in business with a first down at Pittsburgh’s 33-yard line, trailing 7-6. Cincinnati decided to go play-action for the kill shot right away, but the Steelers had other ideas.

Play-action rollout by Dalton to the right, away from the five man rush of Pittsburgh. McLendon, playing heavy snaps as a five-technique for the first time in his career, gets matched up against Eifert at the line of scrimmage, certainly a favorable matchup for Pittsburgh.

The Bengals want to go deep to Green on a double-move, and while the route works beautifully on Blake, the Steelers corner does a great job of recovering and working hard to get back on top of the route. Mike Mitchell’s positioning is also fantastic, as he is there to prevent the deep ball even when Blake initially bites on the out-’n-up.

With no one to throw to, Dalton hesitates, allowing McLendon to shed the tight end’s block and fly upfield. Dalton turtles up to avoid the hit, giving McLendon his first sack of the season and just the fifth of his career.

Dalton should probably throw this ball away with only two routes to the right side of the field and both well-covered, but credit McLendon for getting home in a hurry. Just one play in a great game for the Steelers nose tackle, who stepped up big time as a pass rusher with the Pittsburgh defense sans Stephon Tuitt.

Several of the Steelers best pressures on the day didn’t even lead to sacks in what was truly a mauling defensive performance up front. For all the talk from Adam Jones and other Bengals about how they were determined to not get beat up by Pittsburgh physically in their matchups this season, the first contest of the year did not go Cincinnati’s way in that regard. With Tuitt hopefully returning to the starting lineup this week, the Steelers will face another tough test against an Oakland offensive line playing at a high level consistently this season.