We’ll continue our weekly Wednesday series, breaking down the Pittsburgh Steelers six sacks from Sunday’s game against the Cleveland Browns. It was an unusual day for the Steelers defense, as they technically recorded a sack on the Browns first offensive play of the game, but really failed to apply much pressure on Johnny Manziel until well into the contest.

1. Not much to analyze on the first sack of the game, as Manziel simply dropped back in a clean pocket and let the ball slip out of his hand when attempting to pass. Arthur Moats caught the fumble recovery out of the air, but technically the sack will fall under a “team” category and not be applied to any individual, since Manziel wasn’t touched.

2. Six-man rush vs. the Browns six-man protection, but Lawrence Timmons’ perfectly delayed blitz is what makes this play happen.

Ryan Shazier immediately attacks the B-gap off the snap, occupying running back Duke Johnson’s attention, while Timmons appears to drop into a shallow zone coverage initially. Recognizing the space, Timmons bursts through the opening created by Shazier and Jarvis Jones’ wide rush, getting to Manziel before the quarterback can release the ball.

Manziel probably needs to take what is there and get this ball out to Travis Benjamin on a short dig a couple yards shy of the first down, but instead he pump fakes and is forced to eat the ball for the sack. Big sack for the Steelers D on third down from their own 39-yard line, keeping the Browns out of field goal range.

3. Another fluky sack for Pittsburgh, coming courtesy of Cleveland’s hapless state.  Four-man rush against a five-man protection with a back (Isaiah Crowell) check-releasing into his route. 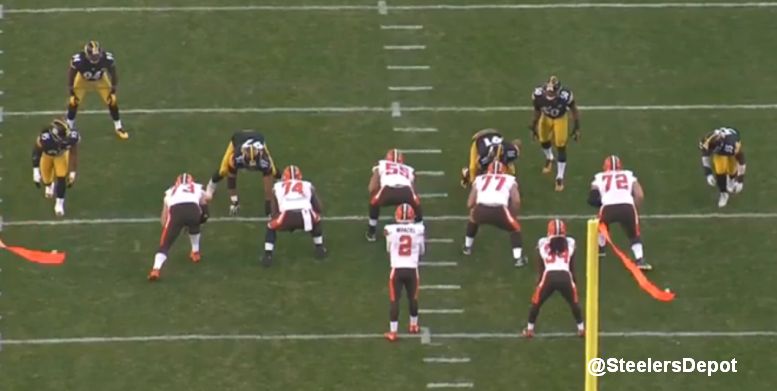 Moats is the man who wins here, standing right tackle Mitchell Schwartz straight up with a violent punch and good leverage. With the separation created between Moats and his blocker, the outside linebacker shows good vision to counter inside and take the most direct route to the quarterback. 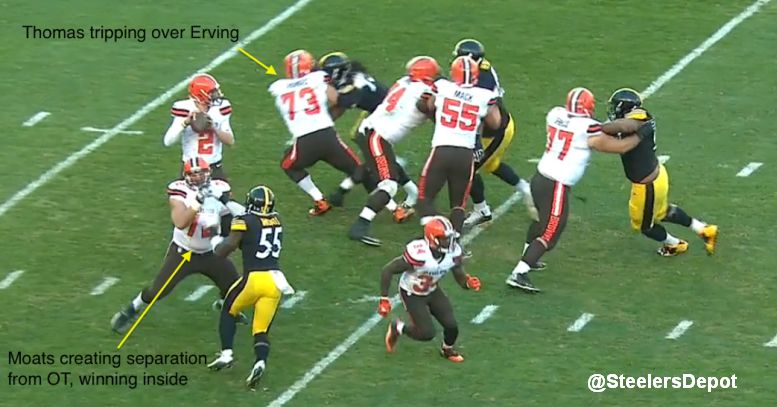 You can also see left tackle Joe Thomas getting tripped by left guard Cameron Erving, who was making his first NFL start on Sunday. Stephon Tuitt gets a solid push on Erving, forcing the lineman back into Thomas’ way. As a result both he and Jarvis Jones tumble to the ground, and Manziel, flushed from the pocket by Moats’ pressure, trips over Thomas for an easy sack for Pittsburgh.

So a little bit fluky again, but Moats winning inside from the edge puts Manziel in a tough spot, which eventually leads to the sack. Moats may not be the most athletic edge rusher, but his ability to win inside and out, and convert speed-to-power is vital to Pittsburgh’s success as a pass rushing unit. Bud Dupree still wants to be a pure win-the-edge guy, James Harrison is the rip-move king around the corner, and Jones has become a heavy bull rusher. Moats’ versatility is his calling card, as he can show a little of everything as a pass rusher. Still an underrated aspect of this defense in my opinion.

Steelers overload blitz the right side of the Browns offensive line, with William Gay coming on a cat blitz from the slot corner spot. Cleveland alertly slides their protection right to counteract the overload, but Erving misses the memo, leaving a huge gap for Tuitt to penetrate to the quarterback.

Just a simple matter of finishing on Tuitt’s part, who shows off his athleticism by tracking down Manziel for the sack.

It was a terrible day for Erving all-around, from poor form to missed assignments to getting straight-up bullied on occasion. Kudos to Keith Butler for forcing the rookie into uncomfortable situations, and to the players for taking advantage when Erving couldn’t adjust in a timely manner.

5. Four-man rush vs. five-man pressure. I won’t spend a ton of time analyzing this one, as Manziel holds onto the ball for a ridiculous seven seconds, eventually getting tracked down by Cam Heyward for the sack.

Outstanding hustle by Heyward (and Anthony Chickillo) to never stop battling and eventually sprint all the way across the field to bag Manziel before he can cross the line of scrimmage.

Pittsburgh’s coverage also deserves major props, as they manage to blanket five receivers for a full seven seconds, an incredible feat to accomplish at the NFL level. I mean look at this aerial view, at no point is anyone really open for Cleveland at all.

Manziel needs to throw this ball away, but still very telling that even with an extended amount of time to get open, no one amongst Cleveland’s skill players can create separation. I guess when you refuse to spend high-end picks on wide receivers despite a substantial need at the position, you get what you deserve.

6. Six-man protection vs. four-man rush. Browns are well-prepared to stop what Pittsburgh throws at them again, but Duke Johnson just can’t handle Shazier on the blitz.

Johnson is catching rather than punching here, with his weight back on his heels anticipating contact rather than dishing it out. Shazier has no such reservations, bowling over the running back like a bat out of hell. Love the physicality and hand placement to convert speed to power and win at the point of attack. Something you see consistently out of Shazier as a blitzer.

It is also another great scheme by the Steelers, with Tuitt attacking the right guard and taking him inside, while Moats comes on a wide rush to kick out the offensive tackle. Creates a huge lane for Shazier and an advantageous one-on-one matchup for Pittsburgh that leads to their fourth sack of the third quarter, and sixth of the game.

After failing to get to Manziel much in the first half (just one real sack, plus the team sack), the Steelers defense was in full attack mode in the second half, albeit aided by some Browns gaffes. With 28 sacks on the season (4th in the NFL), the Steelers are on track for almost 45 sacks in 2015, which would be their highest total since 2010, when the team notched 48.

The number is even more impressive when you consider that 11 different players have recorded at least one sack, yet none have more than Tuitt’s 4.5. A balanced, coordinated attack that can beat defenses in a variety of ways, despite not having one individually dominant pass rusher. Hats off to Butler, who has done an extraordinary job of maximizing his players’ talents and finding ways to consistently pressure the quarterback with creative schemes and designs.