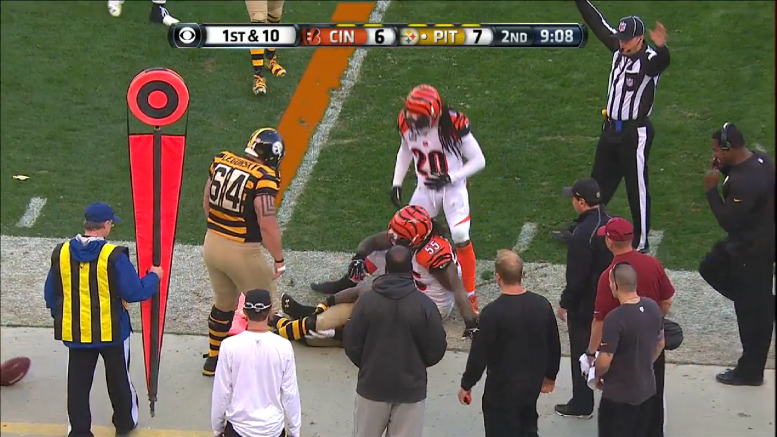 It was not an easy sight on Sunday afternoon, witnessing Le’Veon Bell clutching at his knee after being brought down out of bounds on an eight-yard reception. It was especially difficult for his brothers on the Pittsburgh Steelers’ sideline, many of whom have been vocal about the aftermath of the play.

Several players have expressed the belief that Cincinnati Bengals linebacker Vontaze Burfict celebrated the injury, displaying no reaction to the routine tackle until after he saw Bell grasp at his knee, which we later learned resulted in a torn MCL that has ended his season.

Among those who spoke out was linebacker Vince Williams, taken in the same draft class as Bell in 2013. After learning about the extent of the injury, he took to Twitter to vent his frustrations over Burfict’s response in light of the injury, to which Burfict responded in kind.

This did not escape the attention of many, among them Steve DelVecchio of Larry Brown Sports, who chose to highlight the exchange by framing it as a pair of high schoolers beating their chests over nothing.

That is not how Williams took it, however, feeling that such characterization strips his reaction of context and denigrates his character, not wanting to be caricatured for displaying the same level of emotion for his injured teammate that he plays the game with on a weekly basis.

Williams provided Steelers Depot the following statement about the response to his original post-game Tweet in order to give it context:

First of all, anyone who knows me know I’m not a thug. I’m not going to apologize for my words, however. I was infuriated over the fact that one of my closest teammates was taken out by a notoriously dirty player. I got confirmation that [Burfict] was gloating about causing a season-ending injury.  I’m confused as to how anyone could be happy about that, especially since they had just gone through the same thing.

I was sitting there. The pop was loud. Do you know what it’s like to see someone you consider a brother be in pain and to have something they cherish ripped away from them? Then to watch the player that did it smiling about it? I’m sure that would make anyone want to ouch someone in the face.  I shouldn’t have taken these feelings to Twitter, but I did. If caring about my teammates makes me a villain, then I’ll be public enemy #1 any day, every day.

The pop that Williams mentions was the sound of Bell’s knee popping as Burfict trapped his right leg beneath his body while bringing the third-year runner to the ground. As draft classmates, Williams and Bell have gone through a lot together, through three of Bell’s injuries already, this latest one the most severe. It was Burfict’s first game of the 2015 season after returning from microfacture knee surgery.

It would be hard to fault somebody for speaking out against somebody whom you feel relished doing harm to somebody you care so much about.

Williams concedes that he may not have vented his emotions in the most effective way, but to have his emotional response taken out of context and attributed to schoolyard bafoonery as it has been over the course of the past few days is something he felt deserved addressing.