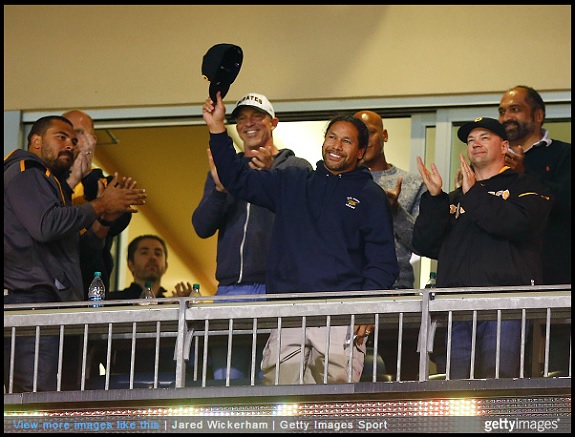 This past week, the Pittsburgh Steelers celebrated the 10th anniversary of their 2005 season, which culminated in triumph and confetti at the conclusion of Super Bowl XL, the franchise’ first title since the dynasty era of the 1970s.

As part of the celebration, the Steelers were able to bring back any number of old faces who have not walked he halls of the South Side facility for some time, such as Dan Kreider, Tyrone Carter, and Verron Haynes.

There were able plenty of faces of more recent memory, including no shortage of defensive standouts and Pro Bowlers, like James Farrior, Casey Hampton, and, of course, Da Beard, and eternal fan favorite, Brett Keisel.

The former seventh-round pick, who was a special teams phenom and gradually a rotational player during the 2005 season, spent nearly all of the 2014 offseason not sure of his future. It wasn’t until late into the preseason that the Steelers gave him a call and signed him to a new two-year contract.

In spite of the fact that the team has obvious defensive line depth issues this year, however, the front office released him early in the offseason, with his season-ending injury obviously playing no small part in that.

Another player who parted ways this year with the organization from that 2005 championship team that conspicuously absent: future Hall of Famer Troy Polamalu, arguably the most important defensive player the Steelers have had in this generation.

The Steelers’ 2003 first-round draft pick was an 11-year starter for Dick LeBeau’s defenses, starting 142 of 158 career games, recording 32 interceptions, 14 forced fumbles, and 12 sacks, so many of which seemed to come at the most opportune times.

But even though he made the Pro Bowl in 2013, his level of play had, in the eyes of many observers, been slipping in the later years of his career. Following that Pro Bowl season, entering the final year of his contract, Polamalu reworked his deal, extending it two years with low values in a cap-saving move.

He only ever saw the original year of that deal. After the 2014 season, the front office was resolved to part ways with Polamalu, and so based on a variety of accounts, they essentially coaxed him to retire. They felt that it was the best move for the organization, and for his legacy.

While most fans agreed, it was certainly not the message that Polamalu wanted to hear, who at the time was not ready to retire. It took months into the offseason before he finally made the decision for himself.

Short of an impromptu appearance at a Pittsburgh Pirates game earlier this year, in which he was recognized unbeknownst to him beforehand, Polamalu has been conspicuously absent in public, and especially around the Steelers facility, where it is a regular occurrence to see old faces roaming the halls.

Former Steelers great Jack Lambert, too, has been awfully scarce since his retirement, and one wonders if Polamalu’s post-playing days will see a similar approach. His no-show at the 10th anniversary of the organization’s fifth Super Bowl championship may be the first manifestation of that.

There are still some raw emotions, some pain and anger, left to be resolved over the way his departure was handled. Perhaps in time fences will be mended, and Polamalu will resume the royal status around the facility that he has earned, but that time is clearly not now.