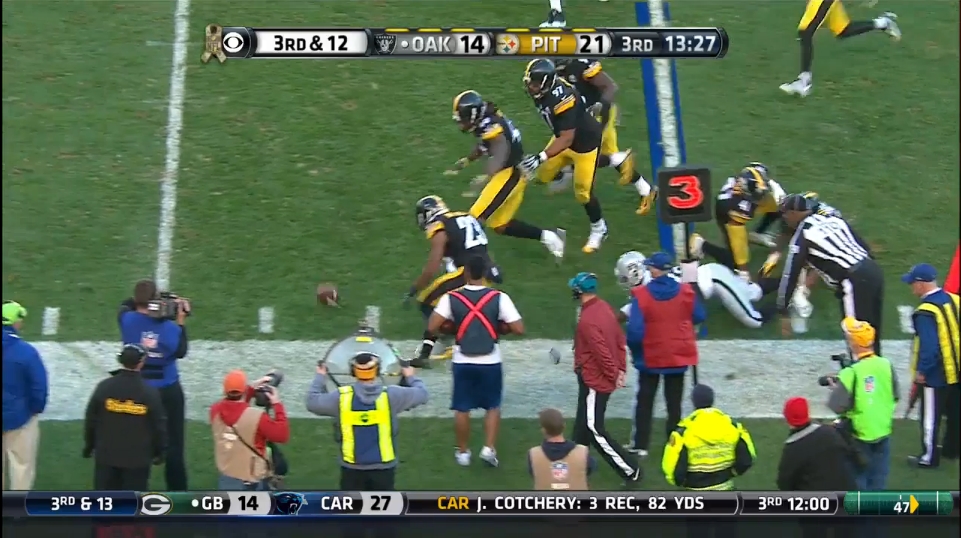 At first blush, a 38-35 score would not indicate a good defensive day for either side. And sure, the Pittsburgh Steelers had their blunders, centered around multiple coverage breakdowns that resulted in big plays and points for the Oakland Raiders.

But one element had that throwback, classic Steelers vs Raiders feel: the physicality. Mike Tomlin praised his defense for that Tuesday.

“Largely, from a positive aspect, I thought we were an extremely physical. Physical up front, phyiscal at linebacker, physical in the secondary, and that physicality aided in our efforts. There were a lot of balls on the ground and things of that nature. We were able to get some of them. I thought it created a climate that was conducive to us doing the things we wanted to do.”

One of those forced fumbles came early in the third quarter when Ryan Shazier jarred the ball loose. The Steelers nearly scored but Mike Mitchell was unable to establish himself back in bounds before touching the ball, nulifing the touchdown and giving the Raiders the ball back. Tomlin just chalked it up to being a “bang bang” play but was happy with one particular aspect of it.

“The most exciting element of the play was the number of guys that we had in the frame. I mentioned the physicality of our play, but I think the hustle was a very positive thing as well. That was a ball in the flat on third down and eight or nine, and we had six or seven guys in that frame as he recovered that ball. That’s the type of defense we gotta play.”

Here’s a screenshot from the play. You can see three other Steelers ready to pounce on the football with another one or two just out of frame.

Sunday’s game is an AFC North rivalry with the Cleveland Browns and you can expect another physical matchup before the team heads into its bye week.