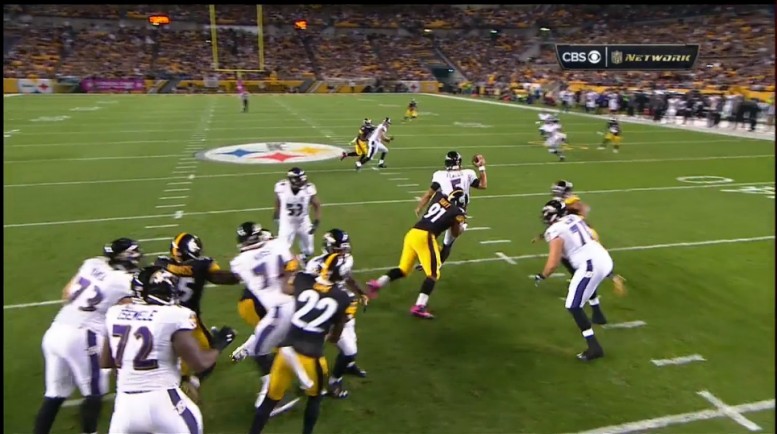 Pittsburgh Steelers second-year defensive end Stephon Tuitt has missed the past two games with a knee injury after beginning the season with an ankle injury that slowed him early on and cut short his preseason.

But the starter, donning a knee brace, return to practice in full capacity yesterday and certainly seemed to be upbeat about his prospects of returning to the lineup on Sunday, which should hopefully see to the end of life without Tuitt.

Perhaps the Steelers will end up the better for it. During Tuitt’s absence, the team began by starting Cam Thomas as his replacement in the starting lineup. Evidently after reviewing the tape, Pittsburgh chose instead to slide Steve McLendon over to defensive end from the nose tackle position.

McLendon has proven himself to be a good nose tackle for the Steelers, playing the position in the manner in which the scheme has been heading, but the defense, especially this season, has spent so little time in the base defense that his snaps have been limited.

McLendon got a lot of work at both end and defensive tackle in sub-packages on Sunday, and Thomas got his snaps as well. This came all while Cameron Heyward logged all but two snaps in the game against the Bengals.

This should not have to happen again. With Tuitt back, the Steelers should have three linemen, including Daniel McCullers, that the team feels at least relatively comfortable with putting on the field in order to give their workhorse defensive ends a breather.

Tuitt in particular began this season playing an unsustainable number of snaps, especially considering he spent three quarters of his rookie season as a reserve. The coaching staff was really testing his endurance, and the injury provided a reprieve.

Tuitt nor Heyward should be required to log in excess of 90 percent of the team’s defensive snaps in a common game, but that was a fairly regular sight. It’s good to know that they are capable of committing to that task, but in so learning you run the risk of wearing them out for the long term.

Nevertheless, Tuitt’s return is much needed for a defensive front that, outside of Heyward, has had much difficulty putting pressure on the quarterback. The 22-year-old defensive end led the team with 3.5 sacks at the time of his injury, and is still second.

The two ends work well together as book-end rushers, often requiring offenses to commit two blockers to account for them. The fact that they share a relentless motor only makes them a bigger headache when they are on the same field, and that aspect has certainly been missing over the last two games, both of which have been losses.

Still, with Tuitt recovering from a knee injury, it will be important that the Steelers monitor his progress coming back. They should limit his snaps and spell him liberally with McLendon and Tuitt, rather than running the risk of a setback. He will be needed for at least eight more games, not just one.