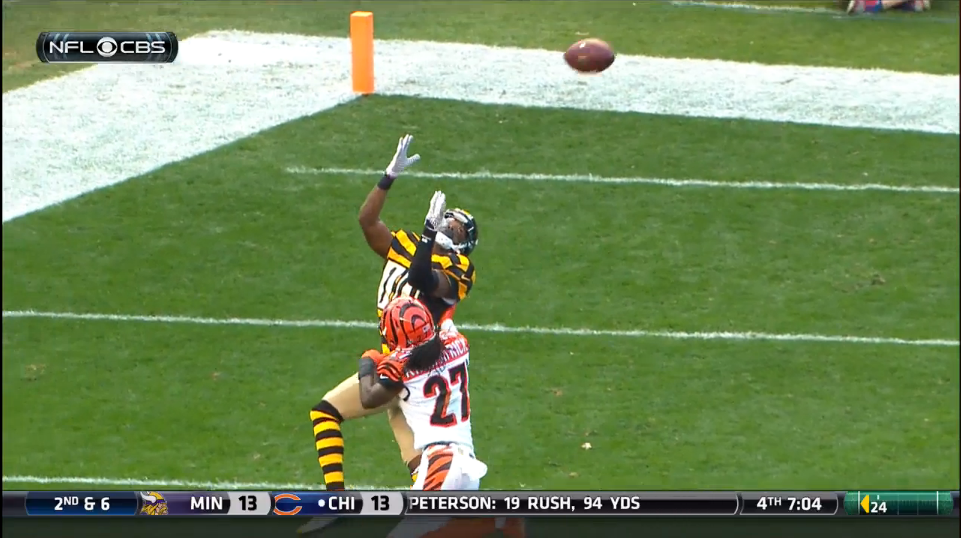 You don’t need to examine tape from the Pittsburgh Steelers 16-10 loss to the Cincinnati Bengals long to know that Ben Roethlisberger deserves the lion’s share of the blame for his three costly second half interceptions. The quarterback owned the loss in the post game press conference as he always does, continually putting the Steelers defense in tough situations with poor decisions and inaccurate throws.

But Roethlisberger is far from the only offensive player to blame, as Pittsburgh’s heralded wide receivers corps had one of their more dismal days in recent memory. A quick examination of the box score itself would cause one to scratch their head, as Antonio Brown managed just six grabs for 47 yards and Martavis Bryant just four catches for 49 yards on the day. Drops have been an issue for both players this season, as Brown has struggled to reel in a few fastballs through eight weeks.

The form isn’t good here by Brown, as he lets the ball into his pads, but this is still a catch he typically makes with ease.

Darrius Heyward-Bey had avoided the drops that plagued him all training camp, but couldn’t come up with a tough catch down the right sideline on a big third down play late in the first quarter.

Obviously a tough catch to hang on to, but one that certainly should be made. Ball placement was excellent by Roethlisberger, and Heyward-Bey high-pointed the football nicely, but simply couldn’t come down with a grab that would have given Pittsburgh a 1st-and-ten just across midfield.

No Steelers wide receiver struggled as mightily as Bryant, who had a shot at two tipped balls, but couldn’t hang on to either. Both would have been tough catches, but the first did end up going right through his arms after being tipped up in the air.

Bryant’s most egregious miss of the day was perhaps the biggest blown opportunity in the game for the Steelers offense. Facing a 2nd-and-18 from the Bengals 33-yard line trying to add to a 10-6 advantage with 13:58 left in the game, Bryant let a beautiful pass from Roethlisberger whistle right between his hands in the end zone.

Touchdown there makes it 17-6 with under 14 minutes left, and with the way Pittsburgh’s defense was playing, an 11-point advantage is huge. Instead Roethlisberger was tripped up for a two-yard loss on the next play, and the Steelers punted rather than attempt a Chris Boswell 52-yard field goal.

My biggest pre-draft concern with Bryant as a prospect, outside of concerns about his football IQ, was that his hand-eye coordination and jump timing seemed consistently off. While Bryant has far superseded where I thought he would be at this point in his career, that weakness remains an issue on a pretty consistent basis. Makes contested catches harder than they should be for a receiver with his size, athleticism, catch radius, and flexibility.

Safe to say that very little of the Pittsburgh offensive attack was in sync on Sunday, whether the loss of Le’Veon Bell effected players negatively or not. Roethlisberger will certainly need to be much better moving forward, but the Steelers wide receivers can’t let missed opportunities slip by again. Plenty of all-around growth to be had for this talented unit in the coming weeks.