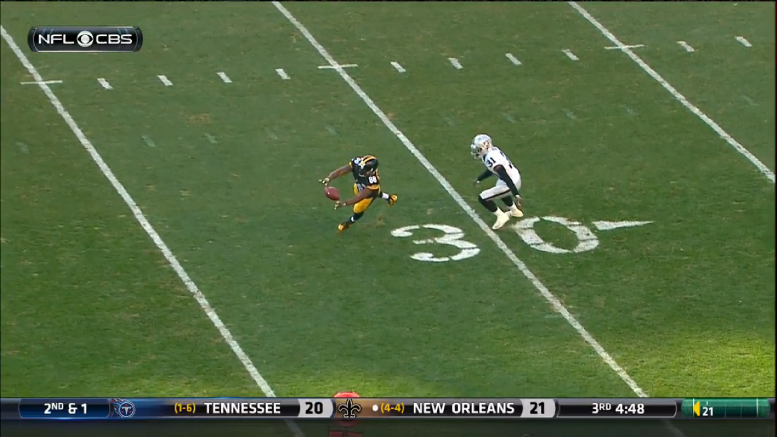 The Pittsburgh Steelers offense was able to generate 38 points last week, putting up 413 yards through the air on 50 pass attempts, which is a very healthy 8.26 yards per pass attempt. Ben Roethlisberger accounted for 334 yards and two touchdown passes before leaving the game late with an injury.

Statistically, it was an excellent day for the passing game, and also a record-setting one for wide receiver Antonio Brown, establishing new franchise marks in receptions and receiving yards in a single game with 17 and 284, respectively.

But for the receiving unit as a whole, there was much to be disappointed about, and there was much left out on the field, amazingly enough. And this was not even about Roethlisberger’s misses here and there, one deep overthrow that was incomplete and another that was underthrown and should have been a touchdown.

The Steelers wide receivers simply dropped too many balls, and failed to come up with contested or challenging throws, with all four who played responsible for at least one play.

The worst offender was of course second-year wide receiver Martavis Bryant, who in spite of the fact that he has four touchdown receptions in four games plays has without question had his down moments this season.

The 6’4” speedster was the recipient of the first pass of the game, a simple comeback route if memory serves, and he let it hit him right between the numbers and fall to the ground. Later in the game, he was delivered an excellent over the shoulder toss down the field, which he bobbled and failed to bring in, even out of bounds. If executed properly, it could have been an 80-plus-yard touchdown.

Wide receiver Darrius Heyward-Bey had just two targets in the game, but he failed to bring in either of them. In fact, he does not have a reception in the last four games. He was targeted on third and four on the opening drive and flat out failed to bring in the ball. Later in the game, he was forced to reach back behind him on a curl route after the ball was not delivered where he expected, unable to make the adjustment.

Markus Wheaton has certainly not had the season that he or anyone else was expecting. Outside of a 72-yard bomb for a score on a double-move post route, he has just 13 receptions for 183 yards and no scores in nine games, in four of which he was an unquestioned starter.

On Sunday, Wheaton had just one reception for -2 yards on a failed screen pass, but he and Roethlisberger was also off on another pass. He was also targeted in the end zone on which he made a diving attempt similar to the dropped touchdown Brown had earlier this year.