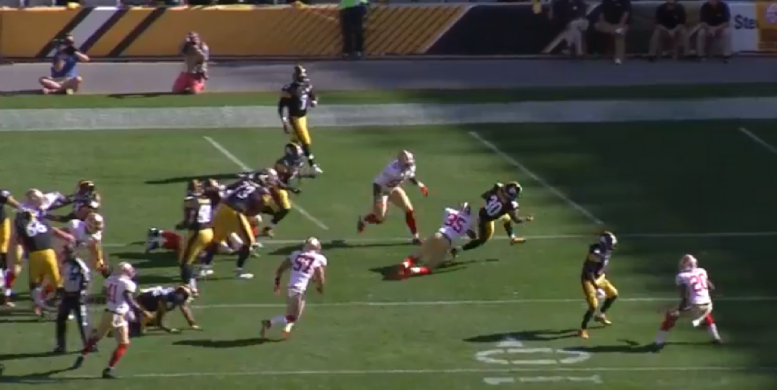 Outside of one carry for 11 yards in the Week 2 game against the San Francisco 49ers, Pittsburgh Steelers running Jordan Todman has spent nearly all of his time on the field playing on special teams. With the team losing starter Le’Veon Bell for the remainder of the season this past Sunday to a knee injury, Todman now finds himself as the backup to new starter DeAngelo Williams.

During his Wednesday talk with the media, Todman talked about what he expects to bring to the Steelers offense when he’s on the field.

“I feel like if given the opportunity, I’m fast, I use my speed and make people miss in the open field. Make big plays, first downs, pick up blitzes and also run routes as well,” said Todman, who signed with the Steelers just prior to the start of the regular season after being released by the Carolina Panthers. “A lot of people can tell you a lot of things, but hopefully I’m able to prove it and let my play do the talking.”

Moving forward without Bell won’t be ideal for the Steelers, but the running game should be in good hands with Williams as the starter just as it was at the start of the season. While Todman was too new to the team during the first two weeks of the season to back up Williams with Bell out serving his suspension, that’s no longer the case with eight weeks remaining. In fact, it will be surprisingly if Todmam doesn’t receive a few carries a game moving forward.

Todman was originally drafted by the San Diego Chargers in the sixth-round of the 2011 NFL Draft, where he spent time on the practice squad. He also has spent time with the Minnesota Vikings (2012) and Jacksonville Jaguars (2012-14).

Last season, Todman rushed 32 times for 186 yards and a touchdown with the Jaguars and he caught 25 passes for 198 more yards and touchdown. He promised Wednesday to be ready when and if his number is called moving forward.

“Definitely, and that’s my job and this is my goal I’m here every day to be ready, be prepared, watch film, staying in the meeting room watching things, picking up things, writing my notes down so I can just go out there and play football like any other game,” Todman said.

As we pointed out right after Todman was signed, he truly is an all-round running back and his offensive tape so far isn’t bad at all. It will be interesting to see just how many snaps he receives moving forward in an effort to help Williams remain fresh.