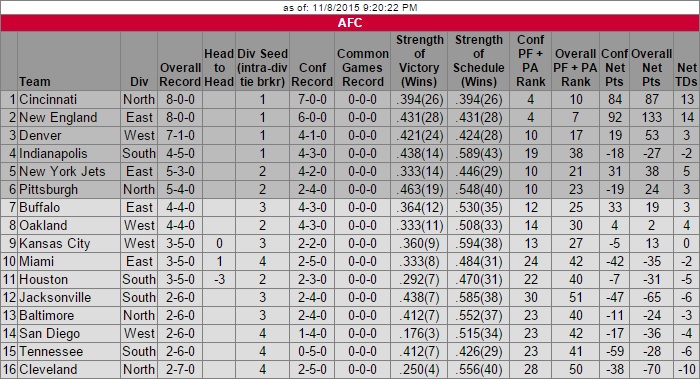 It was touch and go Sunday at Heinz Field but thanks to their 38-35 win over the Oakland Raiders, the Pittsburgh Steelers now find themselves back in the No. 6 spot in the AFC at the conclusion of Week 9.

The Steelers win over the Raiders on Sunday was huge on many levels and that includes them now owning the head-to-head tiebreaker over Oakland should it come down to that later in the season. Next up for the Raiders are the 6-2 Minnesota Vikings and that figures to be an entertaining game next Sunday.

The New York Jets are currently the No. 5 seed in the AFC following their Sunday win over the Jacksonville Jaguars and they will next host the No 7 seed Buffalo Bills, who also won on Sunday, on Thursday night. The good news is that one of those teams is likely to lose that game.

In other key Week 10 action, the Kansas City Chiefs will go on the road to play the Denver Broncos, who suffered their first loss of the season on the road Sunday to the Indianapolis Colts. The Chiefs were off this week.

The Steelers will host the Cleveland Browns in Week 10 and they’ll have to win that game without starting quarterback Ben Roethlisberger, who suffered a left foot sprain on Sunday. Landry Jones will likely make his second career start against the Browns with Roethlisberger sidelined. If the Steelers can come away with a win against the Browns, they’ll then have their bye week before traveling in Week 11 to play the Seattle Seahawks.