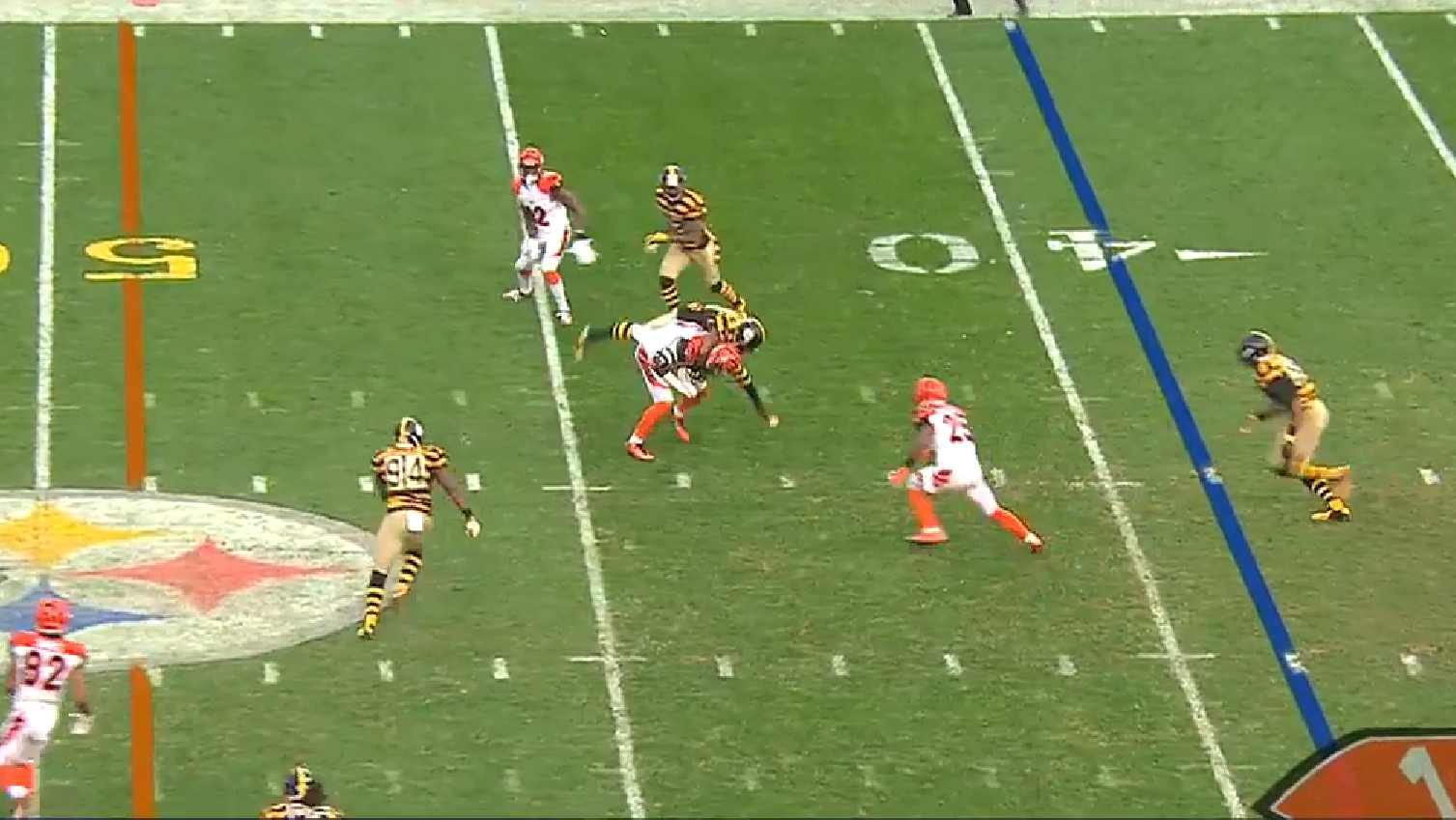 Fourth-year Pittsburgh Steelers safety Robert Golden has started the past four games, and played the majority of the past four, in place of the injured Will Allen. With Allen returning to practice this week, head coach Mike Tomlin may have to make a decision as to who should be out there come Sunday.

To that end, I’ve found it advantageous to take a look at Golden’s performance on a weekly basis, with this past Sunday’s game being no exception. While there were no key moments during the game, positively or negatively—his most noteworthy play was an unfortunate illegal block in the back during an interception return—he has shown nothing in his performance that demands replacement.

Perhaps Golden’s best asset that he has shown is his ability to be multi-faceted as a byproduct of his athleticism as well as his knowledge of the defense, equally comfortable in coverage as in run support. He also displays a willingness to finish a tackle, as he did assisting in bringing the receiver down after a medium gain on the first play of the game.

While the play two plays later was negated by a false start, both teams played the snap as though it counted, and Golden ended up making the stop against Jeremy Hill for a five-yard loss. He charged hard in run support, playing off the tight end as the runner was forced backward, and brought him down out of bounds.

Later in the first quarter, Golden began the play aligned 15 yards off the ball in a Cover 3 look, moving over to cover a crossing route, but instead broke on the ball once he saw Andy Dalton fleeing the pocket. He came up to make a solid open-field tackle on the quarterback after a five-yard scramble.

Early in the second quarter, the safety lined up covering the slot against wide receiver Marvin Jones, but broke off the coverage after leaving his zone, instead taking over A.J. Green in the flat. Golden’s ability to stick with the wide receiver gave Dalton no outlet as he scrambled out of the pocket in that direction, forced out of bounds after a one-yard gain.

On the following play, however, he did miss a tackle, coming up to attempt to tackle Hill on a screen pass. It was an open-field attempt after which he was quite aggrieved with himself, though the defense ultimately made the play for a one-yard loss.

Later in the game, with five rushers in the nickel look, the Steelers essentially had Golden moved up to linebacker, where he quickly broke on a Tyler Eifert reception over the middle, leaping on the lengthy tight end’s back to bring him down and stop his forward progress.

Two plays later, he found himself again playing the slot over Jones, set deep but coming forward quickly after the snap. On this occasion, Golden looked to play the receiver aggressively, going for the ball in front of the target, but he ended up missing the play. I believe that he took this calculated risk knowing he was not the only player defending the area.

It has certainly been interesting to watch Golden log so many snaps over the course of the past month, more than tripling his career output heading into this season. Risking life as a career special teamer, the fourth-year safety has shown, even if he does not retain the starting job, that he can be an accountable factor on defense.