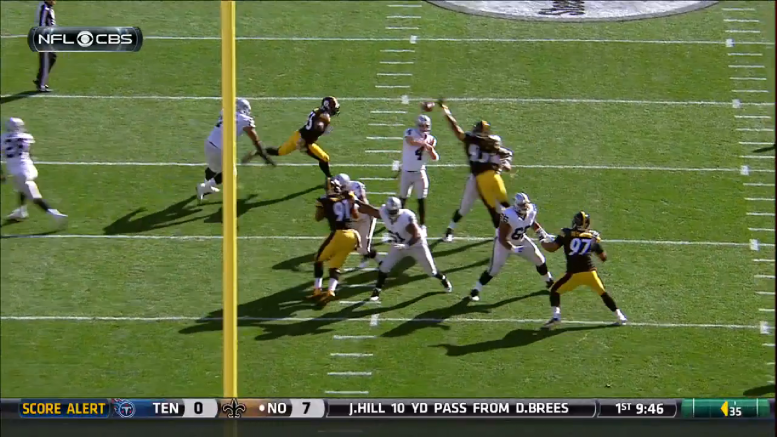 At this point in the season, it’s safe to say that Pittsburgh Steelers outside linebacker Jarvis Jones is a starter only by virtue of title, much as was the case last season when it was Arthur Moats and James Harrison rotating at his spot.

While the snap counts have not become that imbalanced, and the Steelers use a healthy rotation of all four of their outside linebackers, it is noticeable that Jones often plays the least amount of snaps among them. That was the case on Sunday, though he was not without his moments in the game on his 31 snaps.

One of his best plays was actually one of the worst on the day for the Steelers as a whole, as it still resulted in a touchdown, the first of four touchdown passes thrown by Raider quarterback Derek Carr on the afternoon, this one for 22 yards.

It was the end of Oakland’s impressive opening drive. Jones rushed left tackle Donald Penn, first running four yards upfield before settling inside and powering through Penn, driving him toward the quarterback. Jones was able to leave his feet and put up an admirable attempt to defend the pass out of the air before it found its home in the arms of Michael Crabtree 22 yards away.

Early in the second quarter, Jones had another rush against Penn on which he was able to gain at least the initial advantage. The third-year outside linebacker showed a nice inside swim move, but in part because the left guard was able to assist, Jones could not get all the way into the backfield on what was already a quick-release throw.

On the very next snap, Jones had another rush that looked rather similar to the first play that resulted in a touchdown pass. Following a rush look up the arc, he planted his outside foot and bull rushed Penn back into the pocket, getting near Carr, this time with the accumulated pressure helping to result in an incomplete pass.

Jones had just one tackle on the whole afternoon, but his most significant play was obviously deep into the third quarter. Just after the offense had turned over the ball, the defense was able to get it back on a forced fumble from Mike Mitchell, while Jones, who initially helped force the run outside with his initial penetration—albeit against a wide receiver—was there to recover the ball.

Late in the game, the defense was on its heels after the Steelers muffed a punt to spoil a three-and-out. Pittsburgh had the Raiders in a third and 20 just outside the red zone, however, and Jones’ rush and subsequent attempt at batting the ball helped force an incompletion.

Of course, we know how that play ended up, with an arguably incorrectly called roughing the passer penalty. While Jones may not have had a major impact on the game outside of the recovered fumble, however, I believe he had a solid showing.