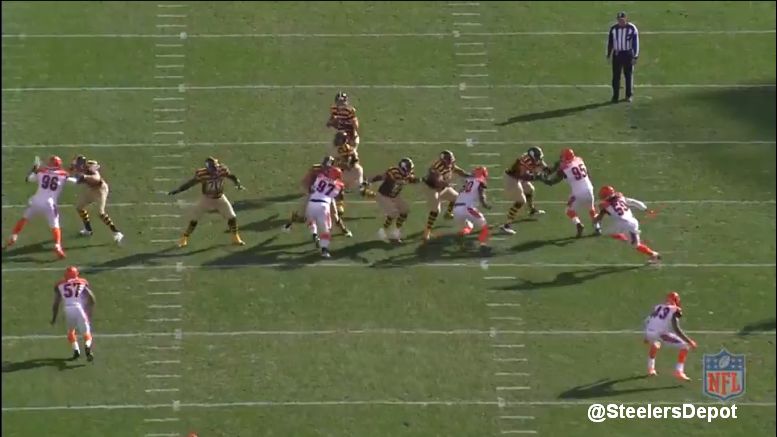 We’re back to break down the three sacks given up by the Pittsburgh Steelers in Sunday’s loss to the Cincinnati Bengals. So let’s get to it.

1. 3rd and 7, 11:54 2nd. 11 personnel. Seven kept in to block only a four man rush. The Bengals run an “X” stunt to the offense’s left side. Like last week, it simply wasn’t recognized and picked up. Less of an issue of the two lineman not being on the same level as what happened a week ago, but just a matter of poor pre-snap recognition. Stunts often come with some sort of tell. A change in the defensive lineman’s stagger or a wrinkle in alignment that tips you off. We get the latter here.

Let’s look back to the Steelers’ second drive, still in the first quarter. Third and six. The Bengals align DE Michael Johnson inside with his hand up and Wallace Gilberry as the RDE. The two stunt, Gilberry crashing and Johnson looping. Alejandro Villanueva struggles to pick it up, letting Johnson get around him, but Ben Roethlisberger is able to release the football before there’s any pressure. 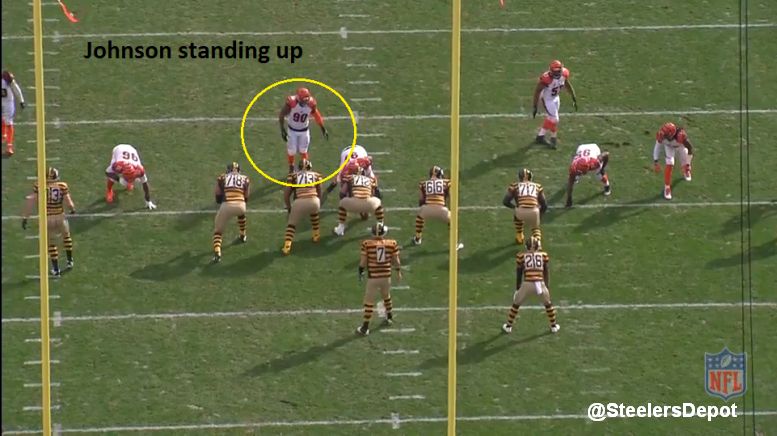 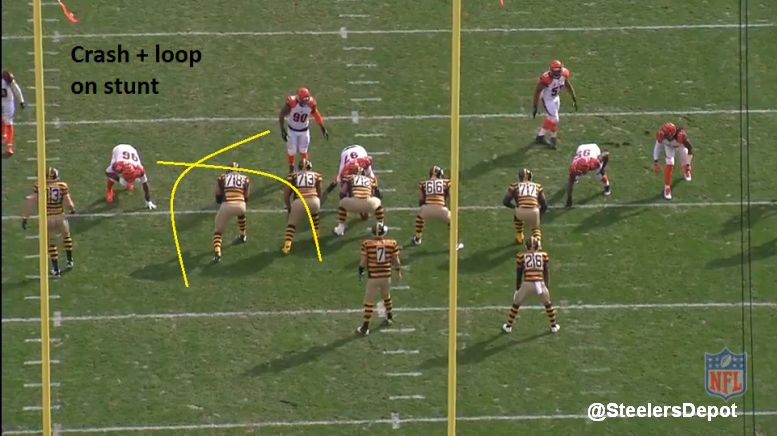 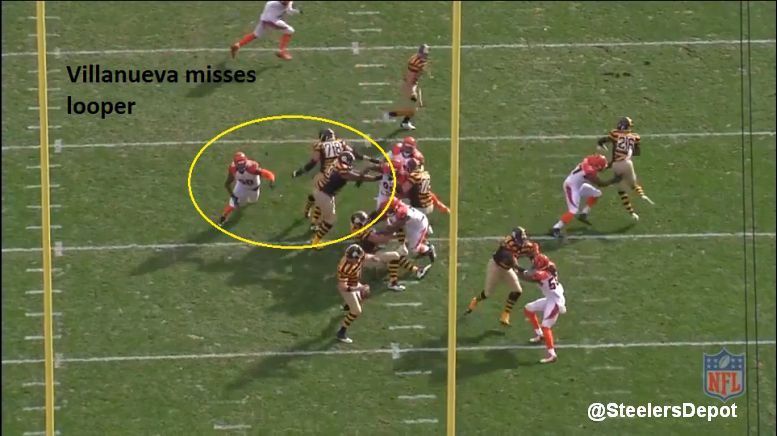 Fast forward to the sack in question. Almost the same down and distance, 3rd and 7, and the same look. Johnson in a two-point with Gilberry sidecar. Going to get the same stunt, though a little more sped up than the first one. Ramon Foster takes the crasher, Johnson, and carries him to Villanueva, where the left tackle should engage, letting Foster take the looper. Foster does pass off, he pretty much has to, but Villanueva never gets his head around and gets hip-to-hip with Foster, eliminating a lane for Johnson to rush through. 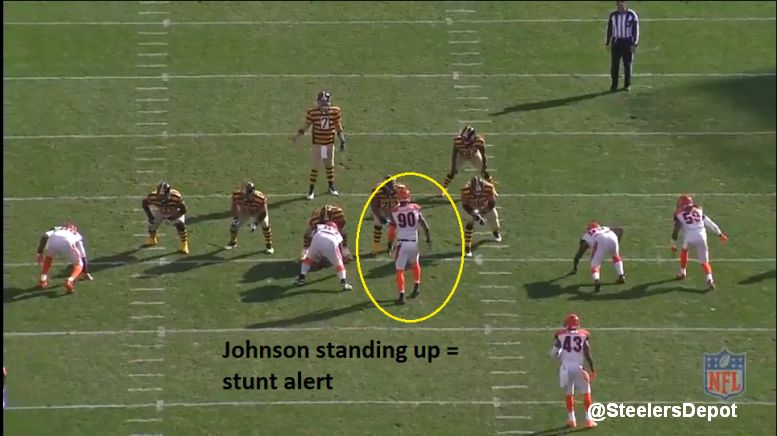 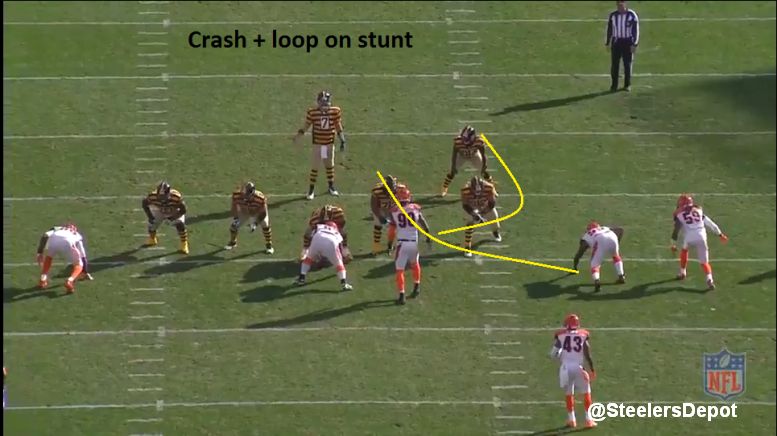 This lets Johnson use his length, comparable to Villanueva’s to move him out of the way and get after Ben. 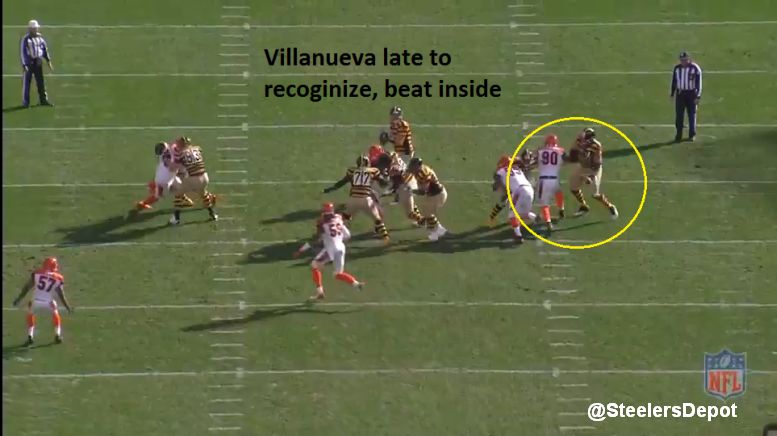 So again, a simple stunt foils the Steelers. Frustrating when a four man rush can get home so quickly when you’re blocking with seven and sliding to the stunt side. You can tell Villanueva is still getting used to the speed of the game and how quickly your brain must work picking up some of these twists and blitzes.

2. 3rd and 18, 13:51 4th. 11 personnel. Five block + a check/release from the back vs a four man rush. Marcus Gilbert is beat around the edge. Opens the gate with his outside foot, giving the DE a path, and is doubling over on his punch (something I’ve still been critical of, even though it hadn’t cost him up until that point). Gets no power on contact and falls off, losing his feet and getting called for a hold that the Bengals wound up declining. 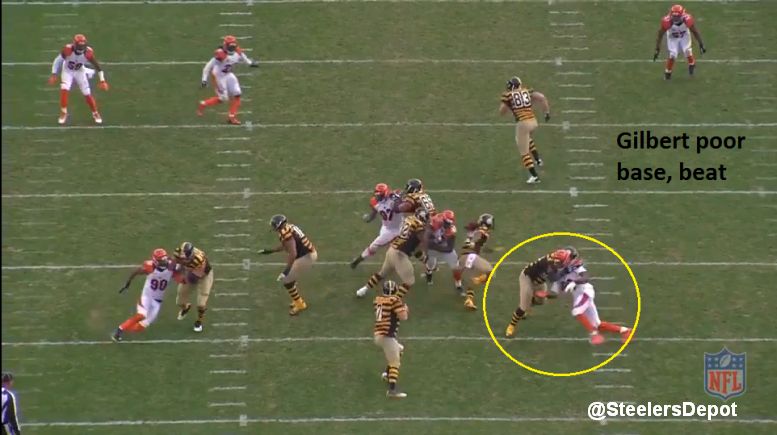 It forces Roethlisberger to step up where another Bengal cleans it up after disengaging from Cody Wallace. Won’t put it on Wallace because it’s tough for a lineman to stop a DL from changing directions and having the angle advantage. We’ve been hard enough on Dr. Wallace as it is. 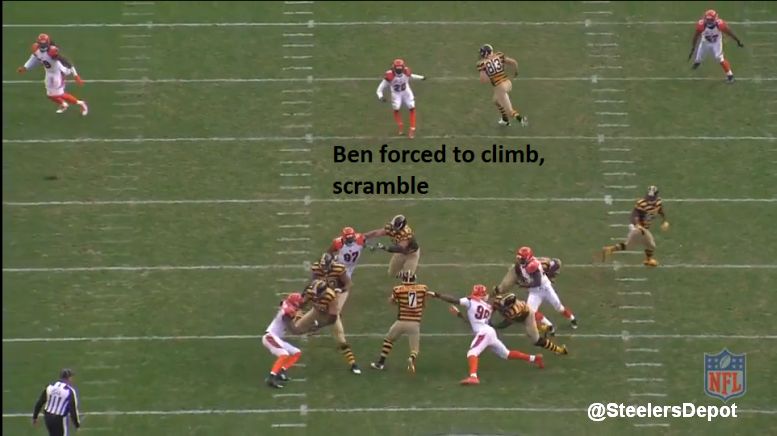 There is another element at play here. I’m actually not crazy about Todd Haley’s playcall here. It’s a four vertical concept with only Heath Miller settling down once he reached the marker. Sure, you can try and win downfield and get the splash play with the divide about the bottom but it’s third and 18. The Bengals are rightfully defending the sticks. 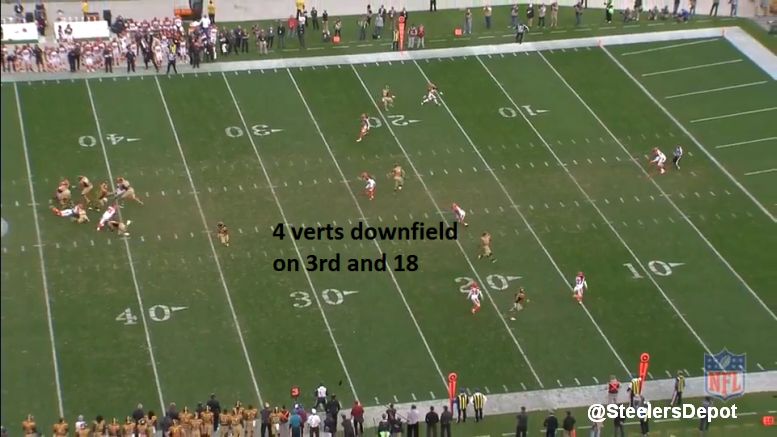 The Steelers are leading 10-6 and are on the fringe of field goal range. The LOS on the snap is the 33, a 50 yard field goal. Why not at least include the option of some intermediate route, a dig, a hitch, whatever, so you can take 10 yards and give yourself a near chip-shot field goal for Chris Boswell, who has been money so far this season? That puts you up by a touchdown with a defense that has held the Bengals’ high-flying offense out of the end zone all day. I like your chances.

Sure, hindsight is easy here, but I’m not one to gripe about coaches. But in this instance, the go-for-it-all play just doesn’t make a lot of sense. The sack, of course, basically bumps the Steelers out of field goal range and Mike Tomlin chooses to punt.

Blame: Half on Gilbert for the initial pressure, half on Haley for the playcall

3. 1st and 10, 1:47 4th. 11 personnel. Five to block plus Heath Miller chipping before releasing against a four man rush. Bengals do another “X” or T/E stunt but the Steelers actually pick it up well here. Looks like they decided to basically play the equivalent of man coverage with Foster and Villanueva, putting the two ono an exaggerated level so they could take their defender without bumping into each other. Bottom line, it worked, and not the issue.

The issue is pretty simple. David DeCastro just gets steamrolled by Geno Atkins. Atkins gets under his pads, into his chest, and DeCastro is unable to get his arms extended (look at how hinged his elbows are). Atkins rides DeCastro into Ben before tossing him away and bringing the QB down. Just brute-strength and Atkins’ built-in leverage going to work. 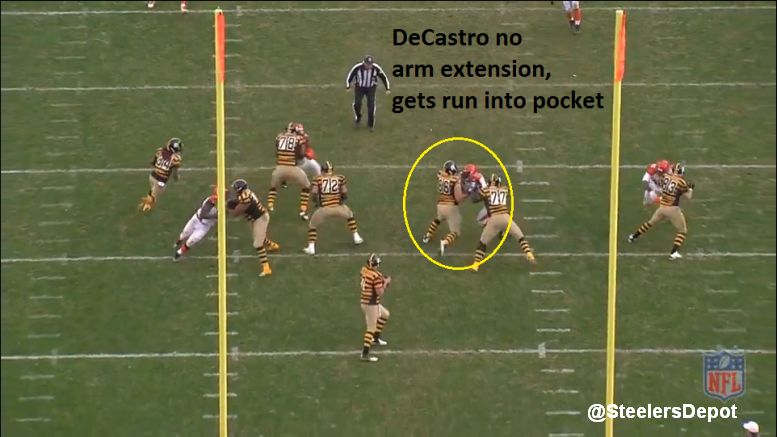 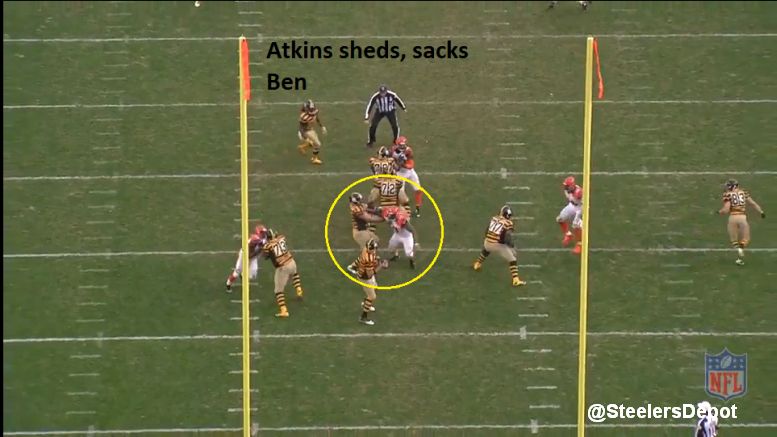