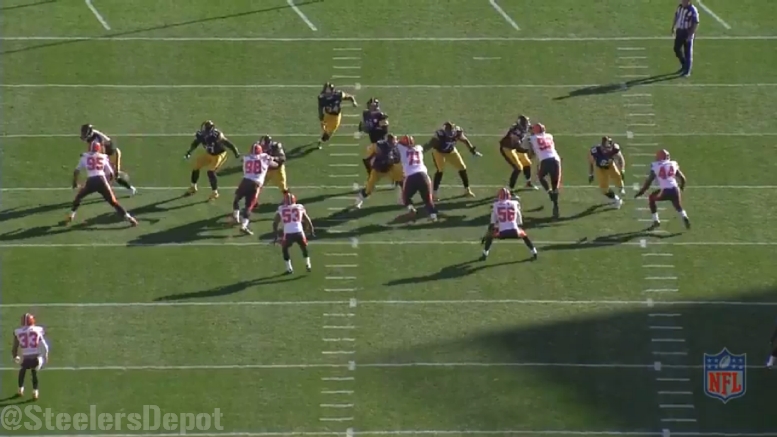 As great of a story as it is, it is not in the favor of the Pittsburgh Steelers to have Alejandro Villanueva in the starting lineup, especially given the manner in which he was given the promotion. He is still very much learning his craft, although he has shown growth during this trial by fire, and will ultimately be better for it.

Midway through the first quarter, Villanueva was docked for a false start on a second-and-10 play, one of a handful that he has had already this season, including one on special teams. The Steelers were fortunate to eventually convert on third and 16.

Following that conversion, however, the 27-year-old responded with an excellent, physical rep in pass protection. While the windup was a big long, he got off a great punch into the shoulder pads of the rusher, showing violence as the tackle slapped his arms down and used the rusher’s momentum to put him on the ground.

On the next play, he showed a bit of uncertainty, but was able to make the switch to protect against a T/E stunt, which is an area of the game that he has shown difficulty with since entering the lineup. The end result was not the cleanest, and he got a bit overextended, but it also looks as though he may have gotten his foot tangled up with the left guard.

Early in the second quarter, Villanueva got a pass rusher on the ground for the second time of the afternoon, something that he has been able to do in just about every game. He has certainly learned from Tunch Ilkin, using explosive handwork to cut the rusher’s hands down. After being unable to establish himself against the tackle’s frame, he spilled to the ground, and the first-year player just had to ride him to the ground. 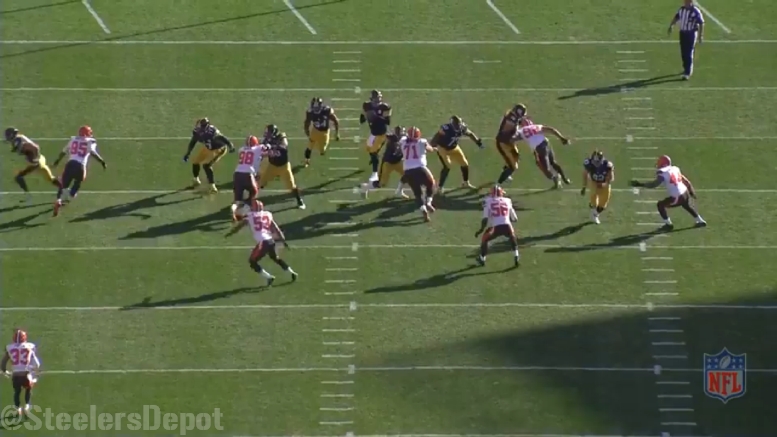 A few plays later, on a deep completion, Villanueva was put up against another stunt, and was better prepared to attack it this time as compared to earlier in the game. For some reason, however, he turned his upper body to the sideline rather than facing the rusher square, as if using his sheer size as an impediment.

But the Army Ranger had a rough sequence of snaps in pass protection later in the quarter, beaten three plays in a row. On a second-and-eight play, he was simply beaten around the edge. On the following play, he was surprisingly pushed back against a smaller rusher that belies an unsound base, who ultimately got a hit on the quarterback, shown below. He was driven back into the quarterback again on the next play.

He did, however, end the half with another good rep in pass protection supporting the vertical game, this one for a 32-yard touchdown, using his reach well to his advantage and mirroring the rusher to keep him well clear of the pocket.

Villanueva will not be mistaken for a five-year veteran any time soon. His level of experience facing a variety of scenarios is apparent every week, consistently bombarded by things he has yet to see. But he is growing in his game every week, playing more comfortably, and making strides, which is about all you can ask.