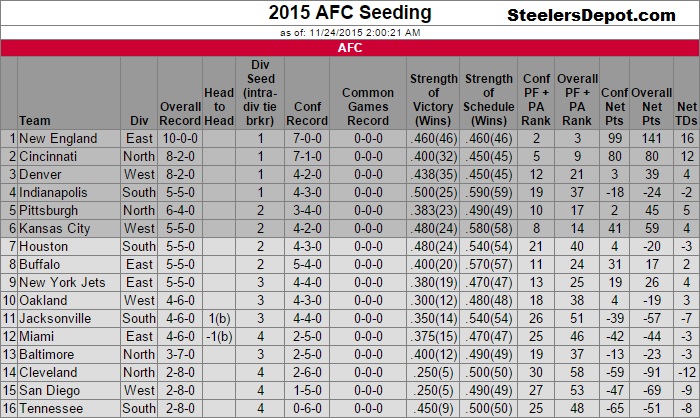 Thanks to the Buffalo Bills losing to the New England Patriots Monday night, the Pittsburgh Steelers retained the No. 5 seed in the AFC playoff race entering Week 12 of the season.

In addition to losing to the Patriots Monday night, the Bills may have lost starting quarterback Tyrod Taylor for a little while as he seemed to injure his right shoulder or collar bone late in the fourth quarter of the game. More will be known about his status moving forward on Tuesday.

Had the Bills managed to upset the undefeated Patriots, they would’ve taken over the No. 5 spot and dropped the Steelers down to the No. 6 seed in the process.

Currently, there are just four teams in the AFC that have a winning record and the Steelers are one of those teams. If the season ended today, they would play the Indianapolis Colts on the road in the first round of the playoffs.

In Week 12, the Steelers will return from their bye to play the Seattle Seahawks on the road. In other meaningful Week 12 AFC action, the 5-5 Kansas City Chiefs will host the 5-5 Bills while the 5-5 New York Jets will host the 4-6 Miami Dolphins.