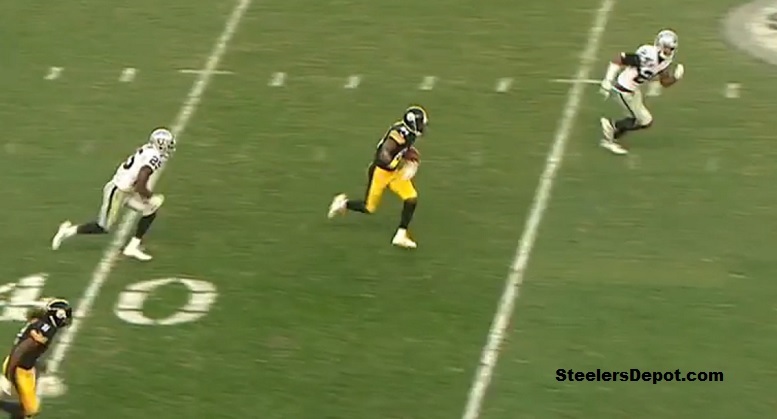 While the Pittsburgh Steelers were able to squeak by yesterday afternoon with a win on a late field goal with two seconds remaining in the fourth quarter, that final frame proved to be a wild one that saw 31 points scored and a flurry of momentum swings going back and forth between the home team and the visiting Raiders.

The quarter began with the Steelers, beginning with first and goal on the Raiders’ 37-yard line. Pittsburgh managed to score seven plays later on a 14-yard screen pass caught by Martavis Bryant, after managing to convert two third-and-ones along the way.

That touchdown broke a 21-21 tie to give the home team a seven-point lead, and fullback Roosevelt Nix helped them build upon that after he jarred the ball loose, flying in on a special teams tackle on the ensuing kickoff. The resulting fumble was ultimately recovered by rookie Anthony Chickillo.

The special teams turnover gave the offense an awfully short field to work with, starting on just the six-yard line, and after a two-yard run from DeAngelo Williams on first down, the Steelers bunched their two tight ends, with the rookie Jesse James peeling off to the middle of the field, recording a four-yard touchdown reception in his NFL debut, and giving his Steelers a 35-21 lead four minutes into the fourth quarter.

But that’s where things began to get rocky, starting with a Chris Boswell kickoff that went out of bounds and gave Oakland the ball at the 40-yard line. It took the visitors just four plays and less than two minutes to respond with a 19-yard touchdown run by the backup fullback, with each play picking up at least 10 yards on the drive.

After a touchback, the Steelers picked up two first downs right away with a 15-yard Antonio Brown reception and a 22-yard run from Williams, but they wound up punting three plays later. Oh, and Ben Roethlisberger exited the game with a foot injury that will cause him to miss time after being sacked for a nine-yard loss on third and 10.

The punt was excellently covered and downed inside the 10-yard line, and the defense responded, forcing a three-and-out after a four-yard run and a pair of incompletions.

After watching new Steeler Jacoby Jones struggle all day on returns, Mike Tomlin put Brown back there to field the punt, and as luck would have it, he fumbled after a defender got a hand on the ball.

The Raiders recovered and took possession on offense at the Steelers’ 39-yard line. After a 12-yard reception, the defense looked to have held them to a field goal, but Ryan Shazier was flagged for roughing the passer on a third-down incompletion.

With first and 10 on the 11-yard line, second-year quarterback Derek Carr’s first two passes fell incomplete, both thrown short right. On third and 10, he threw into the end zone, where he was intercepted by Ross Cockrell, who returned the ball to the 24-yard line.

Holding a seven-point lead with 4:21 to play, the now Landry Jones-led offense managed to pick up two first downs before punting. The only problem is that the second first down was negated by an illegal pick.

Jones found Brown for a 17-yard reception on third and 11 with 2:36 to play and the Raiders having just one timeout left, but the pick instead created a third-and-21, on which Jones threw incomplete behind Williams, stopping the clock.

After a poor punt fair caught at the 31, the Raiders took just a minute to score, with Michael Crabtree taking advantage of the linebacker covering him on a vertical for the 38-yard touchdown reception.

That gave the Steelers 1:15 and two timeouts to score, on a drive that started out with a 19-yard run negated by a holding call. Three plays later, on third and two, Jones connected with Brown on a short pass on which he was able to beat the defender and hit the sideline for a 57-yard gain down to the 15-yard line.

Williams followed it up with runs of five and nine yards down to the one-yard line, with the Steelers calling their final timeout with four seconds on the clock—because the game clock was about to expire. And then the Steelers were flagged for a false start.

Only then did Boswell connect on the 18-yard game-winning field goal, his third make of the game in four attempts. And naturally, there was somehow two seconds left on the clock, forcing the Steelers to kick off. The Raiders ultimately fumbled a lateral with no time left, Pittsburgh recovering for a very exhausting win.