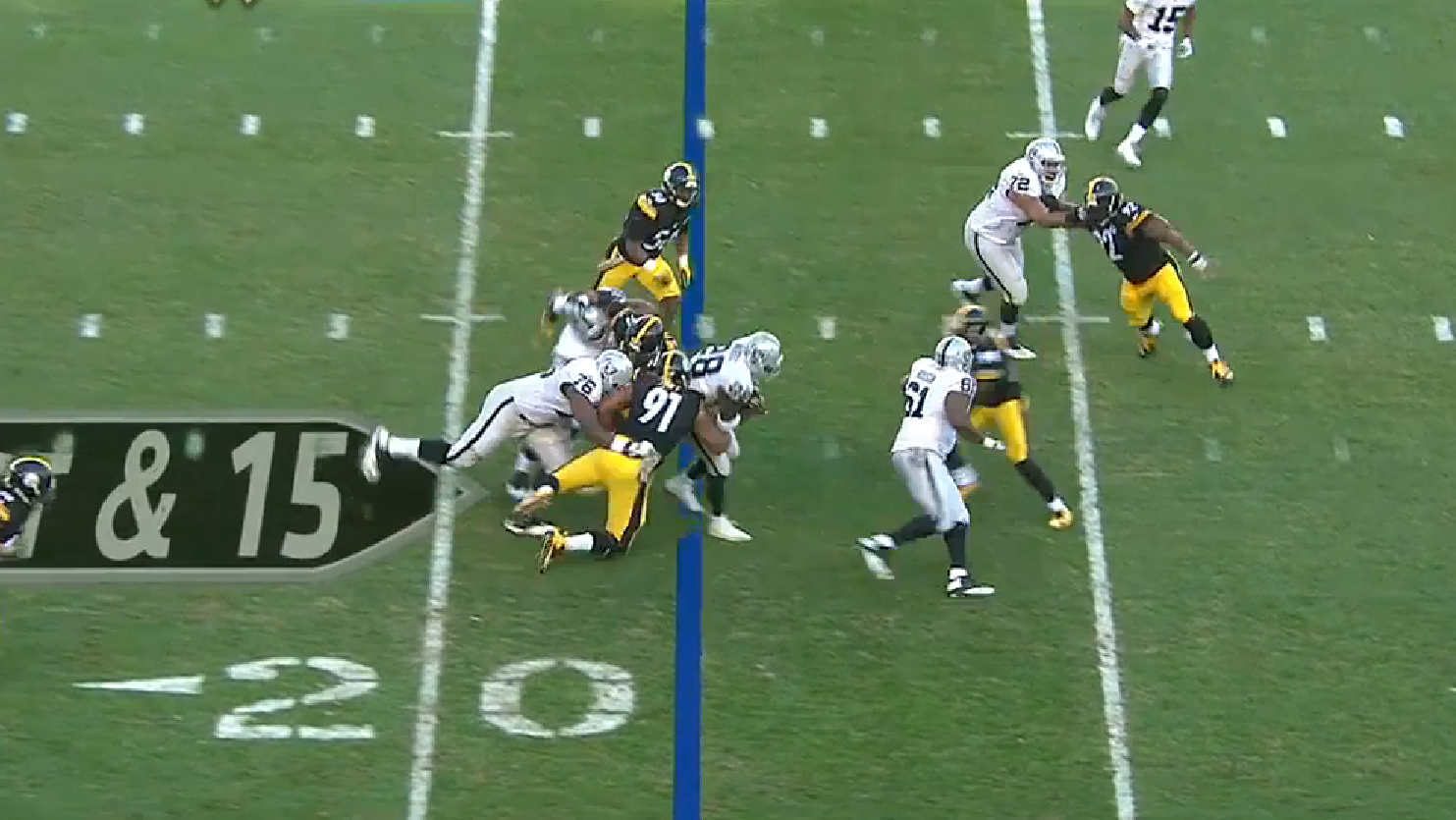 Cameron Heyward and Stephon Tuitt played every single snap for the Pittsburgh Steelers during the team’s victory over the Raiders on Sunday. I will remind you that Heyward and Tuitt are defensive ends in a 3-4 system. That is simply something that doesn’t really happen; the line typically rotates fairly heavily throughout the course of the game.

It’s also not as though the Steelers offense conglomerated the time of possession and dominated the action throughout the course of the game. The Raiders offense, including penalties, ran 71 plays on the afternoon, meaning that Heyward and Tuitt played 71 snaps during the game.

This is the first occasion in the careers of either player in which they were on the field for every snap during the game. Tuitt is of course just in his second season with 11 starts to his name, but Heyward is a fifth-year veteran.

This is not an outlier, either, as the Steelers have been riding their starting defensive ends all season. While Heyward was getting more of a blow here and there, he was still consistently logging over 80 percent of the team’s snaps. That figure has shot up to consistently more than 90 percent in the last three games, during which he has missed just seven snaps.

Of course, it was at the beginning of that span that the Steelers faced a two-game skid without Tuitt, who missed those first two games with a knee injury. The coaches asked a great deal of Heyward to carry the load in that span, and he did.

Tuitt returned on Sunday, and he not only contributed, he posted a career-high snap count in the process of playing every snap.

The reasons for this are manifold. The most immediate is simply the fact that these two young defensive ends are high quality talents and are highly conditioned. They have both the skill and ability to demand the workload.

The Steelers also spend perhaps a franchise-high percent of their time playing with an extra defensive back in the field—certainly within the past decade. The team is in the nickel nearly 70 percent of the time this year, a steep increase from previous seasons, and more in line with the NFL norm of today.

Combined with the fact that the team is not only lacking in defensive line depth generally, but quality rushing-capable depth, it becomes obvious how the likes of Heyward and Tuitt would come to have logged every single snap in a game, and have logged an unusually high number of snaps throughout the year.

This is a topic that has been discussed internally over the course of the season among our writers, regarding the workload of the Steelers’ blue chip defensive ends.

The concern is that the Steelers run the risk of running two of their key defensive cogs into the ground—though it should be noted that Tuitt’s knee injury could in no way be attributed to that.

The fact that the team has been in some close games makes it difficult to take your best players off the field, but the Steelers would be wise to devise ways to give these two players more time on the sidelines, keeping them fresh both for the long haul and in-game. After all, they rotate their outside linebackers, a new development for this team in which this position typically aspires to logging every snap.