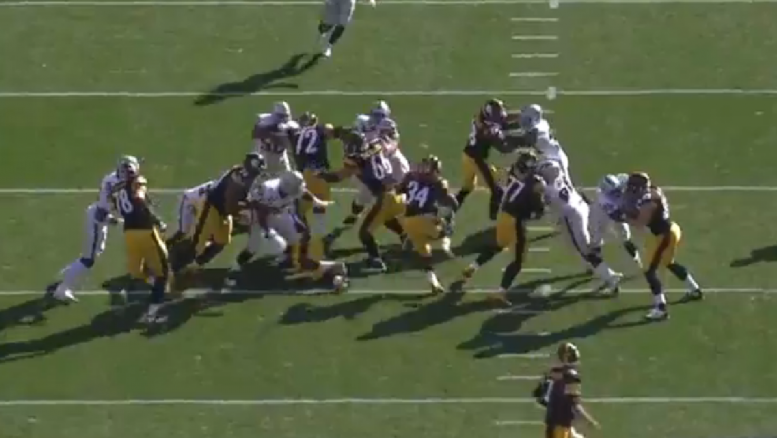 Heading into his fifth season, Pittsburgh Steelers right tackle Marcus Gilbert had been on a general upward trajectory throughout his career, though one not precipitous enough to reach a level of satisfaction for many. He still had some obvious technique issues that held him back.

And he also had a number of injuries that hampered him throughout his career. It caused him most of his second season in the league, and he missed several games last year as well due to an ankle injury.

These peaks and valleys have been the source of much frustration, but all the concerns that have followed the former second-round draft pick out of Florida have really begun to fall away in earnest this season, his second under offensive line coach Mike Munchak.

The Hall of Fame offensive lineman’s lessons saw Gilbert become his star pupil. He played so well during the preseason that it quickly sped up contract talks that resulted in him signing a five-year, $30-million contract prior to the start of the regular season.

While he gave up a couple of sacks early on, he really settled into the season until injuries began to strike, and things began to unravel. He knew that he had been playing too heavy, especially to play the way that Munchak had hoped to ask him to play, and so he began to lose weight.

In part because he was asked to do more things athletically, but mostly because he simply needed to slim down to better support his lower body, which had become prone to injury, Gilbert has dropped 35 pounds over the course of the past two years, he told Mark Kaboly of the Pittsburgh Tribune-Review.

Though his play had been on the rise for some time, particularly during the height of the 2014 season, the right tackle has elevated his game in a major way throughout the course of the year, and has had much to do with building one of the top running games in the league.

The Steelers average the fifth-most yards on the ground per game, averaging the most yards per carry, and while much of that has come from their counter runs to the left, Gilbert has more than accounted for his share of the brunt work.

I say brunt work, but perhaps I shouldn’t. While he still possesses as much strength as he ever has in his career, his slimmer physique has better enabled him to execute athletic blocks away from the line of scrimmage that have further expanded the Steelers’ options in the running game.

Of course, his work in pass protection has been equally commendable, and has been for most of the past two years, having escaped singular blame for any one particular sack thus far through nine games, missing just four snaps on the season.

While he has been knocked a couple of times in terms of penalties, the Steelers will gladly take it if Gilbert continues to lock down some of the best edge defenders in the league, among them thus far Justin Houston and his nemesis, Elvis Dumervil.