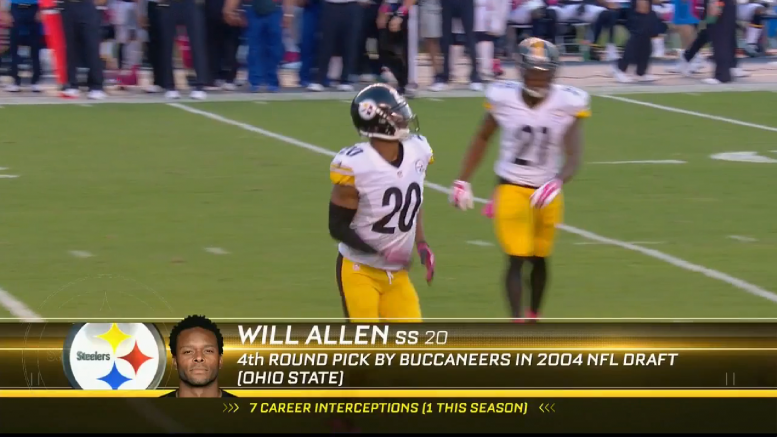 Since entering the starting lineup in place of the injured Will Allen three weeks ago, fourth-year safety Robert Golden has done a representative job of stepping in during the first extensive minutes of playing time in his career with the Pittsburgh Steelers.

After Allen went down with an ankle injury eight snaps in the game in San Diego, Golden stepped in, and has played every snap since, logging 274 snaps in that span, in doing so keeping missed tackles and mistakes to a minimum. Outside of his illegal block in the back penalty on an interception return on Sunday, there has not been much to point to in his game as an obviously negative play.

Which brings us to an interesting point, several weeks later, as Allen heals. Allen is expected to return to practice tomorrow, according to head coach Mike Tomlin during yesterday’s practice, but he did not say in what context.

When asked during his press conference if Allen would return to the starting lineup if healthy, Tomlin deflected, declining to answer, referring to the question as a hypothetical, which he is “not big into”. He said that he will see how he looks and then decide.

Which leaves open the possibility, in my estimation, that Golden may keep his spot in the starting lineup provided that he continues to play at the same level, regardless of Allen’s health.

The question was that if Allen were ready to play, would he start, and Tomlin said that he does not have a decision on that subject. Really, Golden has done nothing over the course of the past three games to earn a demotion, so it would not surprise me to see him stay in the starting lineup even if Allen dresses against the Raiders.

In truth, while Allen has the veteran savvy that Tomlin covets so much, it seems more than ever that age has crept into his game. In spite of the fact that he has missed nearly half the season, he remains among the top performers on the defense in the missed tackles category—which, to be clear, is a negative accolade.

Golden was at the risk of falling into the role of a career special teamer before being given this opportunity over the course of the past four games, an opportunity granted to him only due to the retirement, injury, and poor performance of three players who have been ahead of him on the depth chart over the course of his career.

He is virtually the same size as Allen, but his younger and has superior athleticism, while Tomlin has long been complimentary of his above-the-neck control of the defense. With playing time under his belt, he has been able to show that, for the most part.

And he and Mike Mitchell have worked well together. Mitchell, however, is currently going through the concussion protocol, so it is conceivable that both Golden and Allen are in the starting lineup on Sunday, deferring the decision for another week.