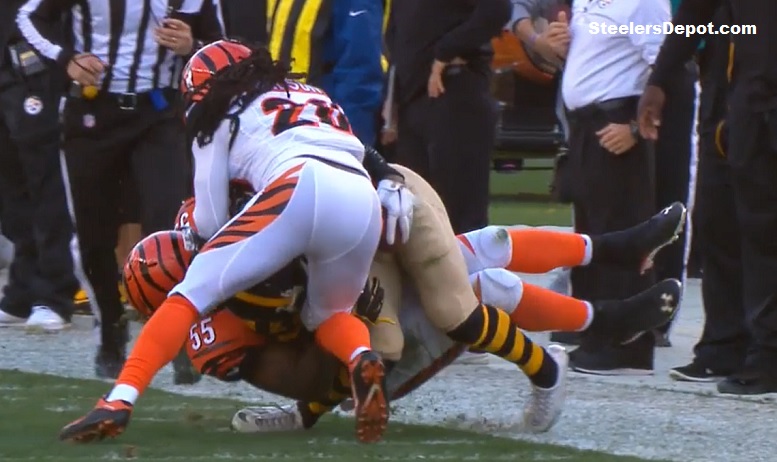 Even though Pittsburgh Steelers running back Le’Veon Bell has yet to have surgery on the knee that he injured Sunday in the 16-10 loss to the Cincinnati Bengals, the former second-round draft pick is already looking forward to getting back on the field next season and being even better than his was before.

Bell, who tore the MCL in his right knee Sunday in the second quarter when tackled by Bengals linebacker Vontaze Burfict along the Steelers sidelines, took to Twitter Tuesday afternoon to address the challenges that await him in addition to taking a shot at those who wished for his injury.

this will be the biggest challenge I have ever faced in my entire life…but being great doesn't come easy, and I'm ready to show greatness!

for everyone who wanted to see me down, congratulations..u got your wish! but just understand in less than a year from now, I'll be stronger

During his Tuesday press conference, Steelers head coach Mike Tomlin revealed that the ACL in Bell’s right knee is still intact. Additionally, he said Bell was still meeting with doctors to determine how he will move forward from his injury.

This is unfortunately the second season in a row that Bell has suffered an injury to his right knee as he suffered a hyperextension last year in the Week 17 game against the Bengals. Over the course of the offseason, Bell posted several photos and videos of himself on his social media accounts of him rehabbing his knee and several of those were shot in Miami at Bommarito Performance Systems where a lot of NFL players train during the offseason.

While it’s sad to think that anyone really wanted to see Bell get knocked out for the season like he suggested on Tuesday, it’s not overly surprising and especially being as several of those wishing bad things for him were probably fans of the other teams in the AFC North.

Bell is still young and there’s no doubt that he will work even harder at overcoming his latest unfortunate injury. If things go as planned, he should be back on the field again prior to the Steelers 2016 regular-season opener.

Bell has rushed for 2,777 yards and 19 touchdowns on 647 carries as a professional. He also has recorded 152 receptions for another 1,389 yards and 3 touchdowns in the 35 games he has played in. 2016 will be the final year of his rookie contract.