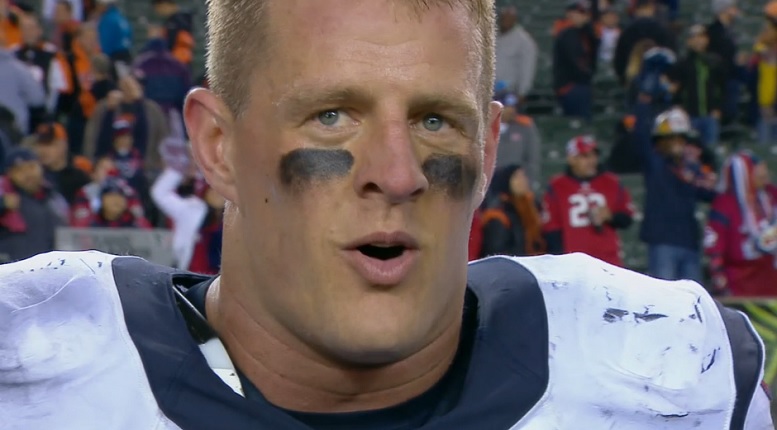 Not only did the Houston Texans upset the Cincinnati Bengals Monday night, defensive end J.J. Watt also upset quarterback Andy Dalton after the game was over.

Immediately after the Texans 10-6 Monday night road win over the previously undefeated Bengals, Watt made a funny comment to ESPN reporter Lisa Salters during his post-game interview.

“Our goal was to come out here and make the Red Rifle look like a Red Ryder BB Gun, and I think we did that,” Watt told Salters.

It of course didn’t take long for Watt’s Christmas Story reference pointed at his Dalton’s nickname, the Red Rifle, to make it back to the Bengals quarterback.

“I’m disappointed in him because of the integrity of this game,” Dalton said during his post-game press conference when asked about Watt’s comments. “I have a lot of respect for him. He’s a really good player. There are a lot of kids and people who look up to him, and for him to make comments like that, he’s just showing that’s acceptable to say that kind of stuff.

I’m pretty sure that Dalton is perhaps the only player outside of offensive linemen currently in the NFL to question Watt’s integrity. Watt is great player and an even better human. It’s hard not to root for him because of the way he carries himself both on and off the football field. Was his shot at Dalton’s nickname a tad strong? Maybe, but I’m sure Dalton has heard a lot worse and so have all of you reading this.

Dalton needs to just get over himself and start getting ready for his upcoming Sunday night game against the Arizona Cardinals.