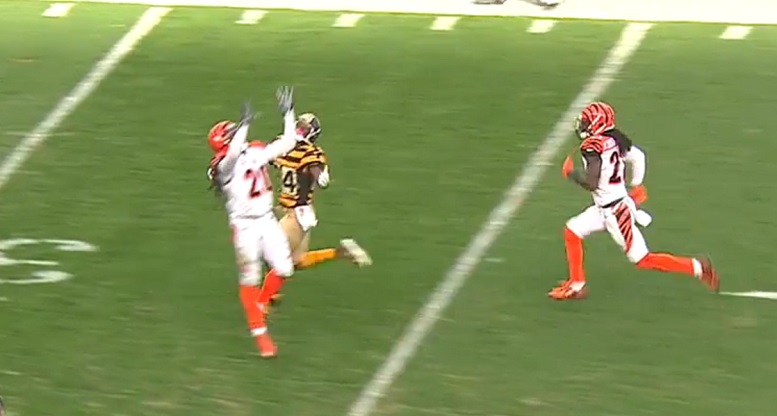 While none of the three interceptions that Pittsburgh Steelers quarterback Ben Roethlisberger threw on Sunday against the Cincinnati Bengals were pretty, wide receiver Antonio Brown admitted on Monday that he probably could have done a better job of preventing the first one from happening.

With 11:56 left to go in the third quarter, Roethlisberger threw deep down the right side of the field on a 3rd and 5 play from the Steelers 22-yard-line and the ball was picked off by Bengals safety Reggie Nelson, who had rotated to the middle of the field from the box at the snap.

“I should have done a better job of cutting him off and not letting him catch the ball,” Brown said, according to Ed Bouchette of the Pittsburgh Post-Gazette. “You never want a defender to catch the ball. I could have run into him, and it would have been second down. Those are the things you learn when you watch tape.”

You can see the all-22 view of the play below.

As you can see, the Bengals really disguised their defense well prior to the snap and Roethlisberger obviously thought he would have Brown singled up on the right side without any safety help over the top. With the ball hanging up, Nelson had plenty of time to get deep and over the top of Brown for the easy pick.

While it probably would’ve been a tough play for Brown to make when it comes to him being a defender on the play, it’s good to see him come to the defense of his quarterback being as he was very critical of the team’s quarterback play while Roethlisberger was out four games with his left MCL sprain.

The Steelers did dodge a bullet on that first interception, however, as the Bengals offense went three and out on their ensuing possession.