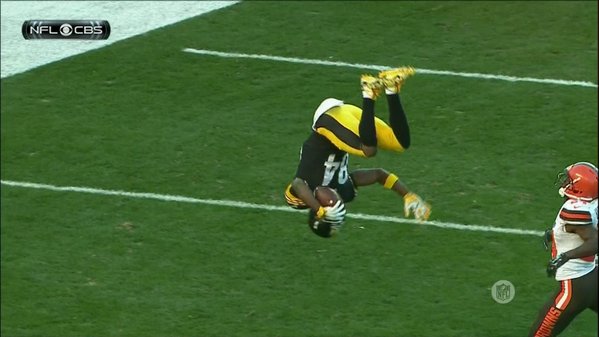 Things looked bleak for awhile to start the game, and Pittsburgh lost another quarterback to injury, but even mistakes and carnage weren’t enough to stop the team from overcoming the hapless Brown by a score of 30-9.

After a Steelers punt, the Browns took over on their own 23-yard line, but looked very Cleveland-like right away. Johnny Manziel dropped back to pass only to have the ball slip out of his hand and right into the waiting arms of Arthur Moats for the fumble recovery. Pittsburgh could only manage a Chris Boswell field goal off the turnover however, and Marcus Gilbert accidentally stepped on Landry Jones’ right ankle on third down, forcing the quarterback out of the game.

The injury meant Ben Roethlisberger, just one week removed from his own sprained foot, entered the game as a backup quarterback on the Steelers third drive of the game. With the score 3-3, Roethlisberger marched Pittsburgh down the field for another Boswell triple, giving the Steelers a 6-3 lead late in the first quarter.

After a Browns punt, Roethlisberger again got Pittsburgh on the move, finding Martavis Bryant down the sideline for a 64-yard gain deep into Cleveland territory. Bryant tight-roped the sideline, but was stripped from behind by Charles Gaines, forcing a fumble that was recovered by Browns cornerback K’Waun Williams.

Lawrence Timmons saved the day by sacking Manziel on 3rd-and-7 from the Steelers 39-yard line, forcing a Browns punt. Roethlisberger again dialed up Bryant deep, and Gaines was forced to hold the receiver’s arm for a 35-yard pass interference penalty. The Browns defense held, but Armonty Bryant jumped offside on Boswell’s 4th-and-5 field goal try, giving the Steelers offense new life. Roethlisberger found Antonio Brown on the slant route one play later, and then again in the back of the end zone for the two-point conversion and a 14-3 lead.

Will Allen punched the ball loose from Andrew Hawkins on the first play of the Browns next possession, giving the Steelers the ball at Cleveland’s 36. Roethlisberger again guided the Steelers to a 1st-and-goal, but overthrew Bryant on a 4th-and-1 at the Cleveland goal line.

Three plays netted zero yards for Cleveland, giving the Steelers the ball back with 1:05 left in the first half. After hitting Brown for 20 yards, Roethlisberger launched one deep for Bryant, who ran right by the Browns defense for a 32-yard touchdown to put Pittsburgh up 21-3 heading into the half.

The Steelers were gifted 77 yards in pass interference penalties by Cleveland to start the second half, but had to settle for a 25-yard field goal by Boswell to go up by three touchdowns. Manziel responded with a 15-play, 72-yard drive that ended with Mike Mitchell snatching his third interception of the year on 4th down at the goal line.

With just over 13 minute left, Roethlisberger gave Cleveland life with an ill-advised overthrow of Heath Miller on third down that landed right in the mitts of safety Jordan Poyer. Two plays later the Browns cut into the Steelers lead when Manziel found Gary Barnidge from seven yards out for the score. Travis Coons missed the extra point to maintain the 15-point advantage for Pittsburgh.

Roethlisberger bounced back quickly, rifling a slant pass to Brown on the Steelers next drive, and watching the receiver do the rest. Brown raced 56 yards to the end zone, front-flipping across the goal line and even sticking the landing. Boswell did miss his first extra point of the season, but the damage had been done with the lead extended to 30-9.

The Browns would go 75 yards on their next drive, but again failed to score when Mitchell broke up Manziel’s fourth down pass into the back of the end zone for Barnidge.

It was an incredible day for Bryant, who caught six passes for 178 yards and a touchdown, while Brown managed 10 grabs for 139 yards and two scores. DeAngelo Williams was held in check with just 59 yards rushing on 17 carries, but Roethlisberger dominated off the bench, throwing for 379 yards and three touchdowns.

The defense couldn’t manage pressure for much of the first half, but finished the game with six sacks. The Browns didn’t help themselves much either, committing 12 penalties for 188 yards, turning the ball over three times, and going 1/4 in the red zone.

The Steelers enter their bye week at 6-4, in great need of the rest and time to prepare for the trip to Seattle in two weeks to face the 4-4 Seahawks.