Antonio Brown did not have one of his best games against Richard Sherman and the Seattle Seahawks. Six catches for 51 yards. But he made one of his classiest gestures during Sunday’s game.

Prior to kickoff, Brown posted a photo on Snapchat of the cleats he’d be wearing. The back of each shoe was initialed “SB12” for St. Louis Rams’ wide receiver Stedman Bailey. Bailey was shot in the head earlier in the week and remains hospitalized for his injuries. Head coach Jeff Fisher told reporters Bailey’s initial surgery took 4-6 hours. 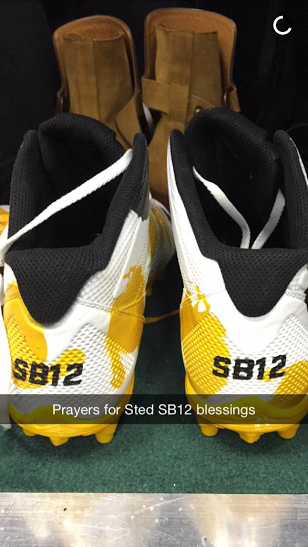 Several Rams’ players also showed their support for Bailey. Kenny Britt marked his pre-game towel with Bailey’s initial and number on it.

Unfortunately, with this feel-good story, there is the looming thought of if Brown will be fined over this action. If he is, it will continue a long-line of outrage in the Steelers’ community. Cam Heyward, DeAngelo Williams, and William Gay have all been fined this season for personal messages on their uniform. Specifically in Gay’s case, he wore purple cleats to promote domestic violence awareness. Even if Brown is fined, like the players before him, the penalty is well-worth the message.