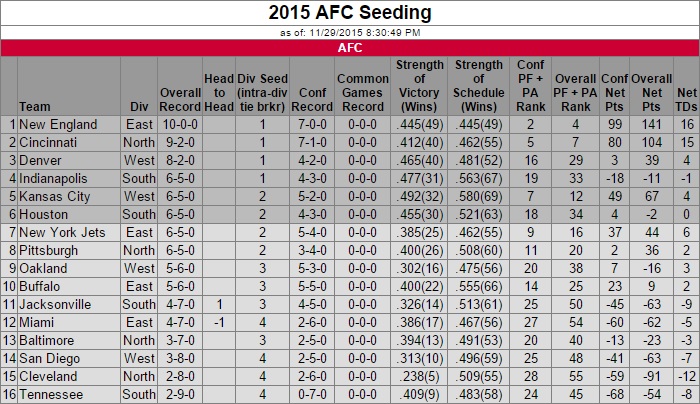 It goes without saying that Sunday wasn’t a good day for the Pittsburgh Steelers as not only did they turn the football over four times in their loss to the Seattle Seahawks, their pass defense allowed opposing quarterback Russell Wilson to throw for 345 yards and 5 touchdowns. To make matters worse, the other games around the league in Week 12 didn’t go the Steelers way and they’ll now enter Week 13 of the season as the No. 8 seed in the AFC as a result of that.

As far as the AFC Wild Card race goes, the 6-5 Steelers now find themselves behind the Kansas City Chiefs, Houston Texans and New York Jets thanks to their 3-4 record within the conference. The Chiefs beat the Buffalo Bills on Sunday while the Texans beat the New Orleans Saints, and the Jets beat the Miami Dolphins.

Additionally, the AFC North-leading Cincinnati Bengals also won on Sunday as they easily took care of the St. Louis Rams at home and while they’ve yet to officially win the division, it would take a monumental collapse on their part for them not to at this point.

Next Sunday, the Steelers will return home to play the Indianapolis Colts, who beat the Tampa Bay Buccaneers earlier on Sunday. The Colts figure to still be without starting quarterback Andrew Luck for that game.