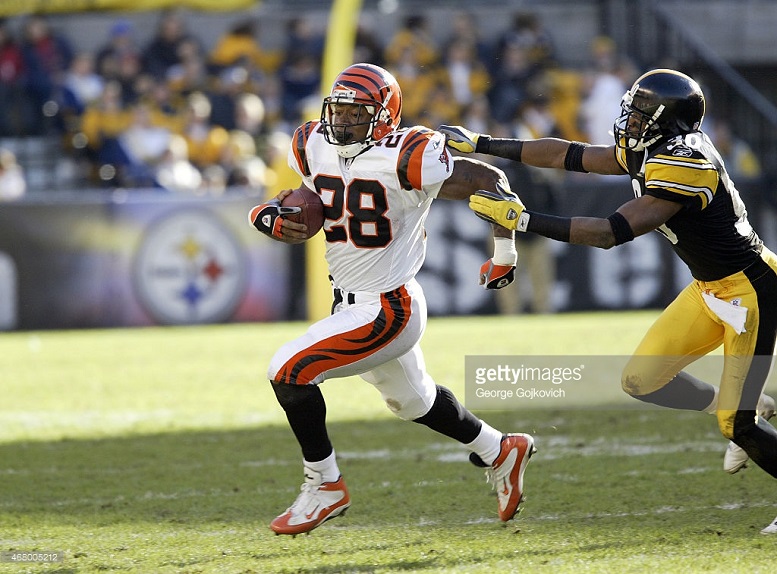 Being as Pittsburgh Steelers running back Le’Veon Bell was born and raised just outside of Cincinnati, Oh, he had no choice but to watch a lot of the Cincinnati Bengals games while growing up. And while he never considered himself a fan of the Bengals, Bell was a fan of their former running back, Corey Dillon.

Dillon, who was drafted by the Bengals in the second-round of the 1997 NFL Draft, is currently ranked 19th overall on the NFL’s all-time rushing leasers list with 11,241 yards. Being as 954 of those regular-season yards came in his 14 games against the Steelers, there’s a good chance that Bell saw most of them on television as a child.

“He was really the last franchise type of running back the Bengals really had,” Bell said. “He was a big guy, he was physical, he was strong. He was also fast and he protected the ball well. Did everything all-around. He was a player that I kind of modeled my game after a little bit.”

On Sunday at Heinz Field, Bell will face off against the Bengals for the fourth time during his young career and he’s yet to lose them in the three previous games that he’s played in against them.

Last season, Bell failed to finish the week 17 game against the Bengals after suffering a hyperextended knee injury. However, in the Week 13 game against the Bengals, Bell rushed for 185 yards and two touchdowns on his 26 carries as the Cincinnati defense had no answer for the Steelers Georgia counter play in that contest. Additionally, Bell had 6 catches for another 50 yards and a touchdown in that 42-21 Steelers road win.

The Steelers will likely need Bell to have another strong game on Sunday in order for them to come away with the win as it will likely be the first game back for quarterback Ben Roethlisberger, who has missed the last four games with a sprained left MCL.