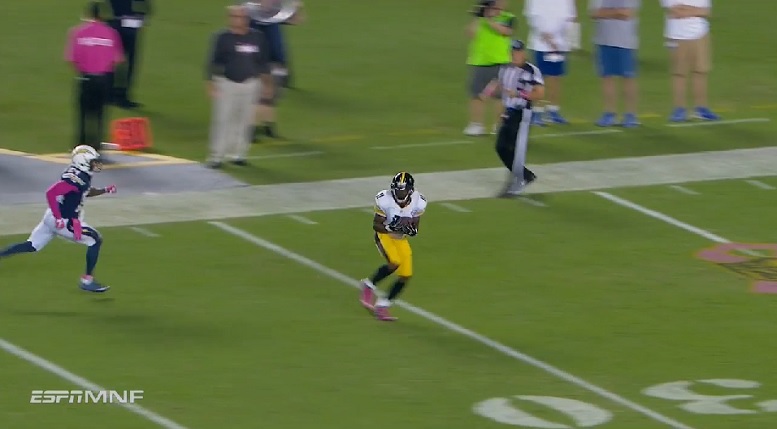 Pittsburgh Steelers quarterback Ben Roethlisberger returned to practice Wednesday on a limited basis and during a Thursday morning interview on the NFL Network, third-year wide receiver Markus Wheaton was asked to comment on how the injured starter looked during his first session back on the field.

“He looked good, he looked good,” said Wheaton, who had a 72-yard touchdown reception in Monday night’s win over the San Diego Chargers. “It looked like he hadn’t missed a beat, honestly.”

While Wheaton said he would like to see Roethlisberger make his return to the football field Sunday at home against the Arizona Cardinals, he knows that call is not in his job description.

“I couldn’t call it all, but like I said, it doesn’t look like he missed a bit,” said a humble Wheaton, the Steelers former third-round draft pick out of Oregon State.

Roethlisberger, by the way was limited again in Thursday’s practice, so it looks like Wheaton and the rest of the Steelers offense will have to wait at least one more week before he returns to the field.

With Roethlisberger sidelined, veteran backup Mike Vick has been attempting the guide the Steelers offensive ship and Wheaton, who was all of 10 years-old when the Atlanta Falcons drafted the quarterback first overall in the 2001 NFL Draft, was asked to tell what it’s like playing with him.

“He’s seen it all, done it all and he’s always even-keeled and that’s one thing I think I love about him,” said Wheaton of Vick. He’s always calm and relaxed, regardless of what’s going on.”

As previously mentioned, Wheaton had a 72-yard reception Monday night and that fourth quarter score really seemed to spark the Steelers offense that had been dismal up until that point. Wheaton was asked what it felt like to be part of such a big play that ultimately led to a win.

“Great,” said Wheaton, who has 9 catches for 228 yards on the season. “Obviously, I want to make plays, that’s what I’m here for. Going through that game and struggling like we did offensively, it was a huge play to really get us going. Obviously, we were down seven and we needed a big play and luckily we got the coverage that we wanted. We got the call that gave us a chance to win and we did.”

Wheaton was also asked to recall how that long pass play call came about after reports and quotes surfaced after the game indicated that Roethlisberger had a big role in it.

“I couldn’t tell you, I wasn’t in that conversation, really, but they came to me and told me what they wanted to do after they got it together,” said Wheaton. “I heard that Ben really drew it up, so we got a certain look that we got throughout the game and they wanted to draw something according to that. So we drew it up and it worked out.”

It will be interesting to see what role Wheaton plays against the Cardinals now that it looks like Martavis Bryant will be making his 2015 debut on Sunday. Wheaton is currently on pace to catch just 29 passes in 2015 and that certainly would be a giant step back from his 53 catch 2014 season. Monday night’s catch, however, now serves as his career-long.