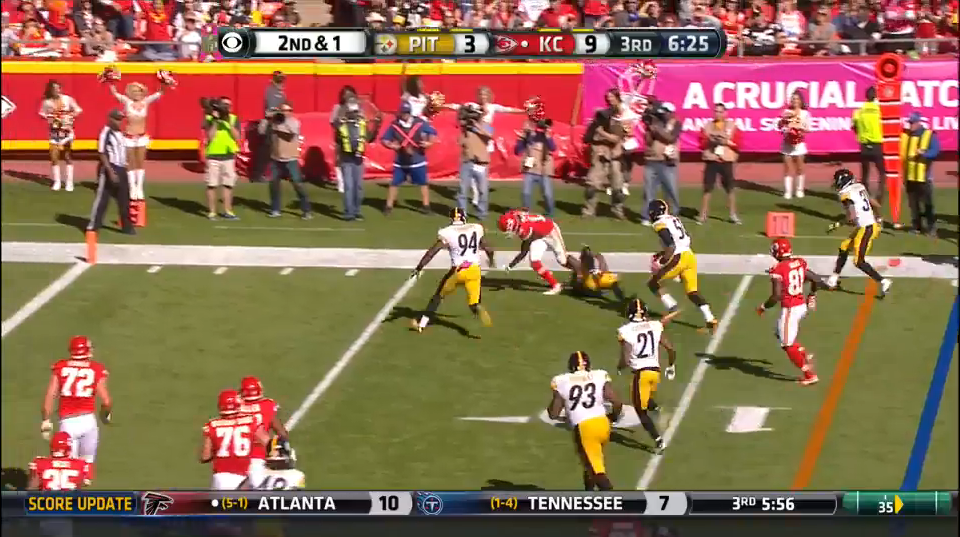 Just when we thought the dark days of plethoras of missed tackles were past, the Pittsburgh Steelers major defensive weakness came roaring back with a vengeance on Sunday in a 23-13 loss to the now 2-5 Kansas City Chiefs.

Last week the Steelers missed just three tackles in shutting down the top offense in football, a huge part of what led to their 25-13 upset of the Arizona Cardinals. On Sunday, with a chance to stay just two games behind Cincinnati in the AFC North with a victory over a Chiefs team that had lost five straight, the Pittsburgh defense managed to whiff on an incredible 20 tackles.

I should note that Harrison’s, Thomas’, and one of Shazier’s misses are under review pending the release of the coaches tape for this week’s game. Just couldn’t tell what kind of a shot they had at the tackle based on the normal camera angle.

Blake continues to blow my mind with his tackling ineptitude. Tries to kill everyone he hits, and with his short arms and small frame, he’s got to find a lower target area as a tackler. Wrap a leg, but stop trying to drop a shoulder into people, or blow guys up high. Know your limitations.

Shazier had a dismal return to the field on Sunday, overrunning several tackles and failing to break down in space. Timmons wasn’t much better, as the duo combined for far too many arm tackle attempts on the afternoon. Jones misses were bad as well, overrunning ball carriers twice.

Not much damage done on this play thanks to the hustle of Cam Heyward, but you can clearly see the tackling ineptitude of Jones, Shazier, and Blake on this rep. I didn’t even count this as a miss for Blake, though it likely would have been.

Shazier and Jones overrun the tackle badly, despite the slightest of evasive maneuvers by James O’Shaughnessy. Blake lowers his shoulder to try and blow up the tight end, despite the fact that it remains unlikely his 5’9, 200-pound frame will deliver a knockout blow to the 6’4, 250-pound O’Shaughnessy. Sloppiness, only cleaned up by the exceptional effort by Heyward.

Perhaps the most egregious miss of the day belonged to Blake, although Jones and Timmons quickly joined him with embarrassing attempts.

Blake arrives first, and actually makes one of his better form attempts at a tackle but still misses. See his helmet go directly into the receiver’s hip? Proper tackling form says helmet on one side of the hip, shoulder pad on the hip, wrap with the arms. Blake missing his target area is the issue here, but his inability to even wrap one leg to slow the runner down doesn’t help either. In fairness to him, he was dazed after the hit, leaving the game shortly after to get examined in the locker room for a concussion.

This screen pass to Chris Conley on 2nd-and-one had me throwing things in my living room.

Gay blows up one blocker, meaning that Cockrell and Shazier have just a solitary blocker to worry about. That receiver misses and flies out of bounds, yet both defenders still whiff on the tackle. Mitchell comes over in support and tries to grab an ankle, but Conley is able to dance away before Timmons pulls him out of bounds.

Charcandrick West had a career day against Pittsburgh, thanks largely to the defense’s inability to tackle. This is the play I need to review with a better angle for Harrison and Thomas, but it appears they both miss the tackle in the box, and then Spence whiffs terribly in the open field.

So 11 missed tackles on these four plays, three of which were essential to setting up scoring drives, the latter two of which were both touchdowns. I wrote about it earlier this week, but the two major things holding the defense back from being absolutely dominant are Blake and missed tackles. Unless the Steelers can find a way to consistently fix these two issues defensively, the unit simply cannot reach their peak performance.