As first reported here, Pittsburgh Steelers center Maurkice Pouncey has finally, definitely, absolutely had a second surgery.  The evidence was an Instagram post from his girlfriend.  Pouncey himself posted photos heading to and from North Carolina but did not mention surgery.  He did, however, have what may be the top of a bandage visible on the part of his left leg seen in the return trip picture:

Jus landed in North Carolina! where the good food at?!??

Pouncey is rumored to have had the plate removed as well as an irrigation and debridement, with application of a wound VAC dressing, otherwise known as a vacuum assisted closure device. The fracture is also likely healing as expected and this is crucial if Pouncey is to have a chance to play football (on the field, not Madden) this season.

(You all know the usual disclosures by now.  I’m not his doctor.  Just making educated guesses based on what I see on the interwebs.)

So what does all of this mean?  I am guessing that the superficial part of the infection wasn’t that bad.  Looking at the exposed part of Pouncey’s ankle in the pre-op photo, there is no sign of an open wound, a dressing, or even any significant redness.  That makes me think that the majority of the infection was successfully treated with antibiotics and he is dealing with the residual effects of the synthetic material, the plate, being contaminated with bacteria and causing a lingering chronic infection.  As I discussed in the last post on Pouncey’s struggles, a manmade material can never be completely cleaned by antibiotics once it becomes contaminated with bacteria.

The only way to solve that problem is to remove the plate.  If the fracture is healing properly, then the plate has done its job and is no longer needed.  It isn’t unusual for orthopaedic surgeons to remove hardware at some point after the fracture has healed.  The most common reason is irritation or pain that the patient experiences when exercising.  But I digress.

Once the plate was removed, the surgeon reportedly did an irrigation and debridement.  The debridement is the surgical removal (or cutting out) of any infected or chronically inflamed soft tissue that isn’t healing properly.  The surgeon will continue to remove tissue until all of the remaining tissue looks clean and healthy.  This is the type of surgery that New York Giants tight end Daniel Fells likely had multiple times until all of the infections was cleared out.  In this case, it is very unlikely that such a dramatic debridement was needed.  Then comes the fun part – washing the remaining tissue with an irrigator; this is the surgical equivalent of a power washer you would use on your house.  This is typically done with saline solution containing antibiotics.

It isn’t unusual to leave the wound open in this situation.  If the surgeon closes the skin edges, there is a higher chance that a fluid pocket could form that would spontaneously drain and cause the skin edges to separate.  It is also more likely to have recurrent infection build up if the wound is closed.  Leaving the wound open is in some ways a preventative move.  The wound then needs to heal from the bottom up.  Think of it as an open book closing from the spine towards the edges.  The wound fills with healthy tissue, called granulation tissue.  Eventually, this tissue grows from the bottom up until it is at the level of the skin; as this happens, the wound edges move closer together.  Finally, the remaining open area scars over.

This process can take a while, depending on the size of the wound and the patient’s nutritional status.  Fortunately, we can assume that the young athlete is in good shape physically and nutritionally.  I have no idea how big his wound is.  Regardless of the size, the VAC will help speed the healing process, decreasing the total time by half in many cases.

For my fellow geeks, here is the patient information pamphlet.  The VAC is a very clever but fairly straightforward concept.  A sponge is placed into the wound and covered by a plastic dressing that seals it off.  Then a vacuum device is attached by a tube that provides gentle suction on the sponge.

This pulls any fluid out of the wound and helps to accelerate tissue ingrowth, resulting in a faster closure of the wound.  The VAC dressing is typically changed 3 times per week, allowing the nurse to assess and measure the wound at a regular interval.  I have used this device many times, and it is remarkable how well it works.  But don’t try this at home; Acelity still has a patent on the device!  Here is an example of what it would look like on a patient’s leg with the controller for the VAC device: 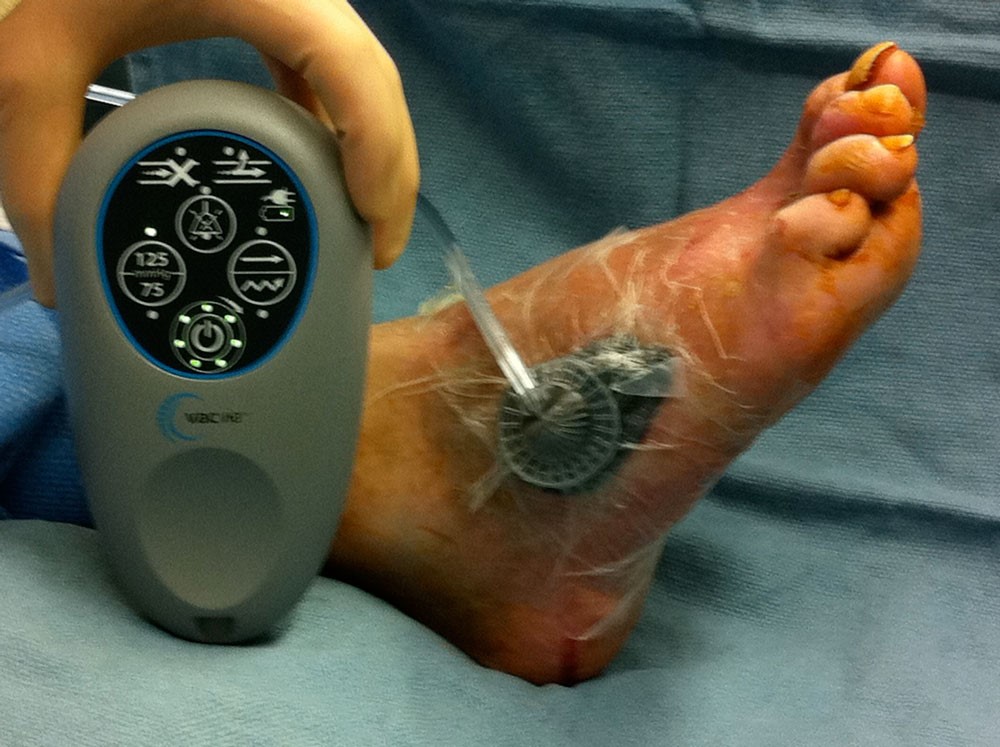 So will Pouncey be back?  I still don’t know, and neither does he or Mike Tomlin.  But assuming that the rumors are true and the fracture has healed, Pouncey can return to the training room once his wound has healed.  I’m still going to estimate that he is 3 to 4 weeks away from that.  Of course, I could be way off in either direction.  He could be back as soon as the last estimate I made of Week 12.  Or he might be lucky to come back for the playoffs, if the Steelers can make a run.  Either way, the Steelers need to keep winning so that Pouncey can rejoin the offensive line.