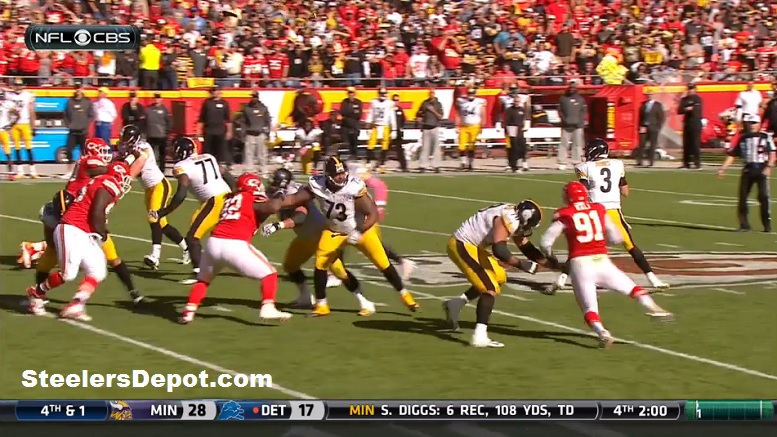 Pittsburgh Steelers quarterback Landry Jones wasn’t the only player who made his first career start on Sunday against the Kansas City Chiefs as the same went for tackle Alejandro Villanueva, the former Army captain and undrafted free agent.

Villanueva, like Jones, had his share of problems Sunday against the Chiefs and the former allowed the latter to be strip sacked with 2:11 left in the game.

“When the game is on the line, and you give up a sack on a drive you can win the game, it is a pretty terrible feeling,” Villanueva said after the game, according to the Pittsburgh Tribune-Review. “I have to play better and understand the team relies on me when it matters the most, and I didn’t do that.”

Villanueva’s poor technique on the Steelers final offensive play of the game resulted in him lunging and flat backing as Chiefs linebacker Tamba Hali beat him around the outside for the strip-sack of Jones. You can see the replay of that sack below.

Villanueva also allowed a total of three hurries in the game in addition to the late sack. He is now the Steelers starting left tackle for the remainder of the season due to the team losing Kelvin Beachum to a torn ACL last Sunday against the Arizona Cardinals.

Outside of the sack and the three hurries on Sunday, Villanueva played reasonably well. Because of his large size, however, he does have problems staying on his run blocks at times. We will have a full breakdown of his play on Sunday in a future post.

Villanueva is currently under contract with the Steelers through the 2016 season and with Beachum’s future status currently unknown, he very well might be the team’s starting left tackle for quite a while. He should only get better the more that he plays.