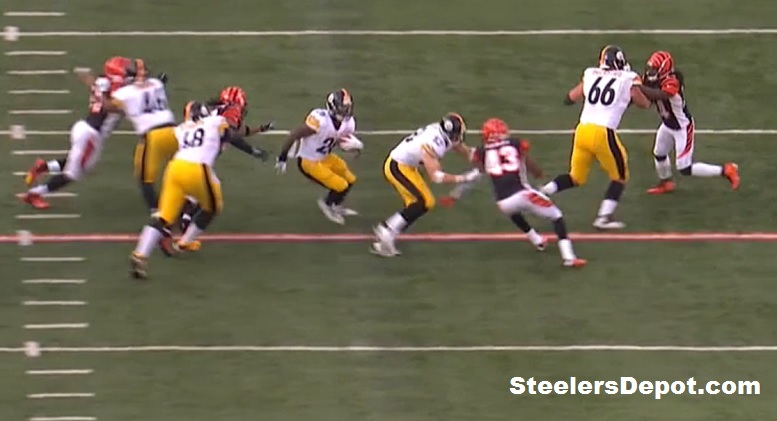 If the Pittsburgh Steelers are going to beat the undefeated Cincinnati Bengals Sunday at Heinz Field, one would think that they must be able to run the football successfully in the game in order to keep quarterback Andy Dalton off the field as much as possible. By the looks of things, they should be able to have some success in doing just that.

For starters, the Bengals defense enters Week 8 ranked 28th overall in the league in rushing yards allowed per play. If you want to drill that down even further, their defense is ranked last in the league when defending runs between the tackles as they’ve allowed 5.13 yards per carry on 122 rushes.

While Steelers running back Le’Veon Bell currently has a 4.96 yards per carry average so far this season, it’s important to remember that most of those carries came without starting quarterback Ben Roethlisberger on the field. That’s quite impressive when you consider that opposing defenses have been focusing on shutting him down while Roethlisberger has been sidelined.

Bell also has already registered 13 carries of 10 yards or more so far this season and all but one of those have come when Roethlisberger wasn’t under center.

In the Week 14 game last season against the Bengals, Bell rushed for 185 yards on 26 carries in the Steelers 42-21 win and if you remember correctly, quite a few of those yards came via their Georgia counter play to the left with right guard David DeCastro leading the way. In that game, DeCastro pulled left 10 times with Bell carrying the football and it resulted in 138 yards and two touchdowns.

On Thursday, Steelers offensive coordinator Todd Haley was asked about the success of that counter play last year and how the offense used it more in the first game against the Bengals than they did in the Week 17 meeting between the two teams

“The first game, I don’t know, I would say we ran it 10 or 12 times, in some form of it. It’s one of those things, when something is working, you keep doing it until they fix it,” said Haley. “But the second game, they worked a bunch at it and they did a much better job of stopping it.”

So, is Haley assuming the Bengals defense will be better prepared for that counter play on Sunday like they were last year in the second of two meetings?

To be fair, the Steelers only ran that counter to the left with Bell twice in that Week 17 loss to the Bengals. The first of those two times came on the first play of the game and Bell gained 6 yards. The second time they pulled DeCastro to the left in that game with Bell carrying the football, the play was blown up for a 5-yard loss as Bengals safety George Iloka came untouched on the right side at the snap of the football.

Bell, of course only carried the football a total of eight times in that game as he left early in the third quarter with a hyperextended knee.

If I’m Haley, I run that counter play early and often on Sunday in addition to using some pass plays that feature false keys like DeCastro pulling to the left as I’m not convinced that the Bengals will be able to stop it. We shall see.