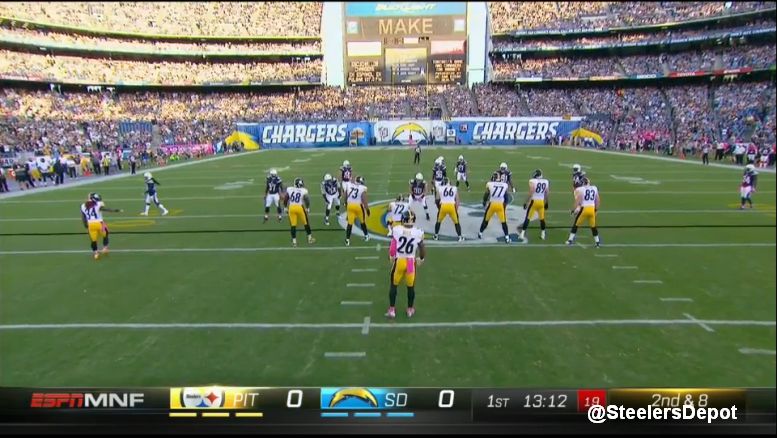 Back in his rookie season, the Pittsburgh Steelers got creative at times with running back Le’Veon Bell, and during a few games out of the year, offensive coordinator Todd Haley chose to line up the rookie rusher under center in the Wildcat formation.

It was a new look for the Steelers at the time that caught everybody by surprise when they first unveiled it against the Ravens, but it was used sparsely throughout the rest of the season, and, if I’m not mistaken (please correct me if I am), they put the idea entirely on the shelf last year.

Of course, star quarterback Ben Roethlisberger was never particularly thrilled with the idea, as it forced him to run out to the perimeter and line up as a ‘wide receiver’, which he felt wasted valuable time between plays and was an obviously ineffective decoy.

And taking the ball out of the hands of your best play, when he is unhappy in doing so, is not exactly good policy, so it was no surprise that we saw the idea go by the wayside as time passed.

But it’s not Roethlisberger under center right now, but Mike Vick, and as we’ve seen, that evidently means a return of the Wildcat.

In the spirit of putting the ball in the hands of your best player, which, until Roethlisberger returns, is Bell, the Steelers ran out of the Wildcat five times during the game, I believe, which included four direct runs from Bell, and one occasion on which he handed the ball off to DeAngelo Williams.

Of course, among those carries was the final play of the game from the six-inch line, in which Bell took the direct snap and, through a supreme effort, scored the game-winning touchdown, in a surprising and risky call that panned out due to the premiere back’s individual performance.

The Wildcat formation also produced two six-yard runs in addition to the score, so the Steelers did find success running out of it, as they did on occasion during the 2013 season. It is not sparsely used because it was ineffective. It’s just not the best offense to run with a quarterback such as Roethlisberger.

With the veteran figuring not to be back quite yet for Sunday’s game, however, might we continue to see more of the Wildcat for yet another week to complement Vick at quarterback? Might we see further nuances in a game-time situation?

Reportedly, practice yesterday concluded with Vick on the receiving end of a deep ball thrown by wide receiver Antonio Brown, who quipped that that is how you throw the football, a mild jab at the fact that his production has been radically curtailed without Roethlisberger.

Haley and the offense has had to go back to the well and get creative in an effort to try to generate offense not simply without Roethlisberger, but with a quarterback who still has a partially limited understanding, or at least level of comfort, with the offense. It bore fruit this time around when they believed it would be effective, but with it now on tape, and going up against a stout defense, will we see it again two weeks in a row?