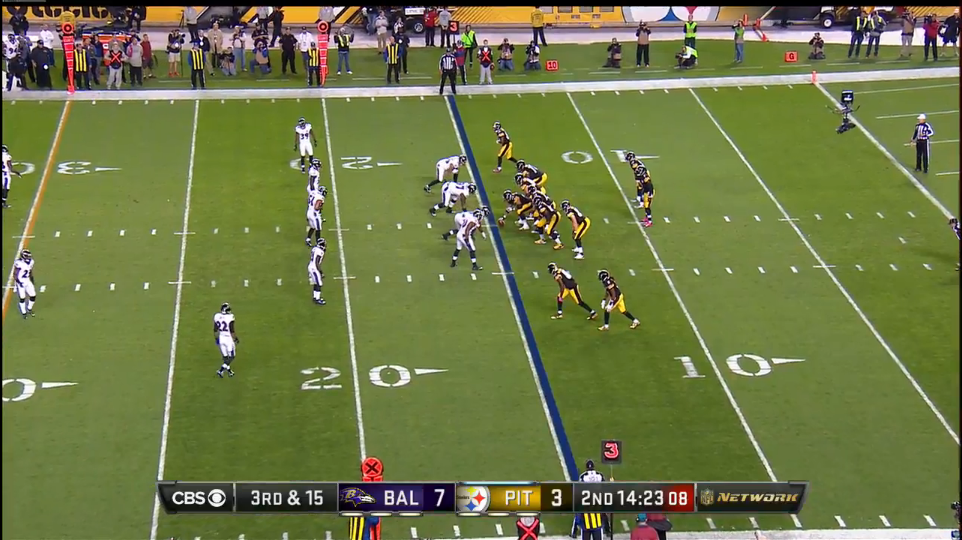 The 11-day break in between Pittsburgh Steelers games this week allows us to take a look at personnel packages and player usage over the first four weeks of the season. Some of it might be a bit tedious to research, but there are several intriguing facts within the examination of every offensive play of Pittsburgh’s young season.

– The Steelers have run 258 plays on offense this season, including penalties and kneeldowns. 11 personnel has dwarfed all other packages for Pittsburgh, with the team operating with three wide receiver on 175 snaps, or just under 68% of the time. The Steelers have been in 12 personnel on 37 snaps, 13 personnel on 11 reps, and 22 personnel 11 times. The full breakdown is listed below:

– Interesting to note that the Steelers have not run any four wide receiver sets this year, instead opting to use Le’Veon Bell, DeAngelo Williams, or Heath Miller flexed when they spread the field. Not unexpected with Martavis Bryant out, but possible we could see a 01 personnel here or there with the Clemson product returning this week and Darrius-Heyward Bey playing well in his absence.

– The Steelers have operated out of the no-huddle offense on 46 plays this season, including 26 against San Francisco. 44 of those plays have come with Ben Roethlisberger at the helm, as Pittsburgh ran no-huddle just twice last Thursday with Michael Vick leading the offense.

– Roethlisberger has been in the shotgun on 120 of his 171 snaps (70.2%), while Vick operated from the gun on 46 of 87 snaps (53%). That’s 166 snaps out of 258 (64%) where the Steelers were in shotgun rather than under center, and don’t expect that number to decrease as the season goes on. Vick and Roethlisberger both operate comfortably out of the gun, and Todd Haley loves to utilize it.

–  Bell has been at wide receiver on 24 of his 122 snaps in two games, including 10 of his first 20 plays against the Rams. His versatility is reciprocated in Williams, who lined up at receiver on 12 of his 124 snaps this year. Bell has only missed three snaps since his return from suspension by my count, and two were kneeldowns.

– The wide receiver position has been a little all over the place thanks to injuries, suspensions, and releases, but Antonio Brown has been the one consistent, on the field for over 93% of the Steelers offensive snaps. Only 25 of his snaps have come from the slot, as Haley moves him there a couple times each games for matchup purposes. Wheaton has done the heavy lifting in the slot, seeing 74% of his reps there. Heyward-Bey has been all over the formation, but is typically on the outside. Brown leads the team with four drops, while Wheaton and Williams each have one as well.

– Brown has been targeted 44 times, while Heyward-Bey is the second closest with 20. Bell has caught 14 of 15 targets in two games, and Heath Miller has collected 13 of 18. The high conversion rate by every receiver on the Steelers roster has helped Roethlisberger and Vick to complete over 75% of their passes this season.

– Same starting five on the offensive line for every snap this season except for the final four reps against San Francisco when Alejandro Villanueva came in for Marcus Gilbert to help run out the clock. Villanueva has two snaps at wide receiver, four at right tackle, and five at tight end. Chris Hubbard saw his first live action against Baltimore, getting in as a receiver-eligible extra blocker at tight end for 11 snaps with Matt Spaeth out due to injury.

– Miller has only missed ten snaps this season, nudging Brown (15) for the least misses on the team for a skill player. Miller might be old, but he’s still in impeccable shape.

– Some fun notes, Spaeth has not been split out wide for any of his 55 offensive snaps. True in-line blocking tight end who has not been targeted yet this season.

– Roosevelt Nix has 23 snaps, two at tight end, while Will Johnson has 38 snaps, 17 of which came against Baltimore with Spaeth out. Johnson’s versatility is still his calling card, as 30 snaps came at wide receiver, seven from the backfield, and one at wide receiver.

– Sammie Coates is up to 30 snaps, registering 27 against Baltimore after Wheaton went down with an injury.

– Dri Archer has just three offensive snaps this year, two at wide receiver and one at running back, all coming in Week 1 against New England. Even lately-acquired running back Jordan Todman has more reps than Archer in the Steelers offense with four.

– Lawrence Timmons got two offensive snaps on kneeldowns as the deep back.