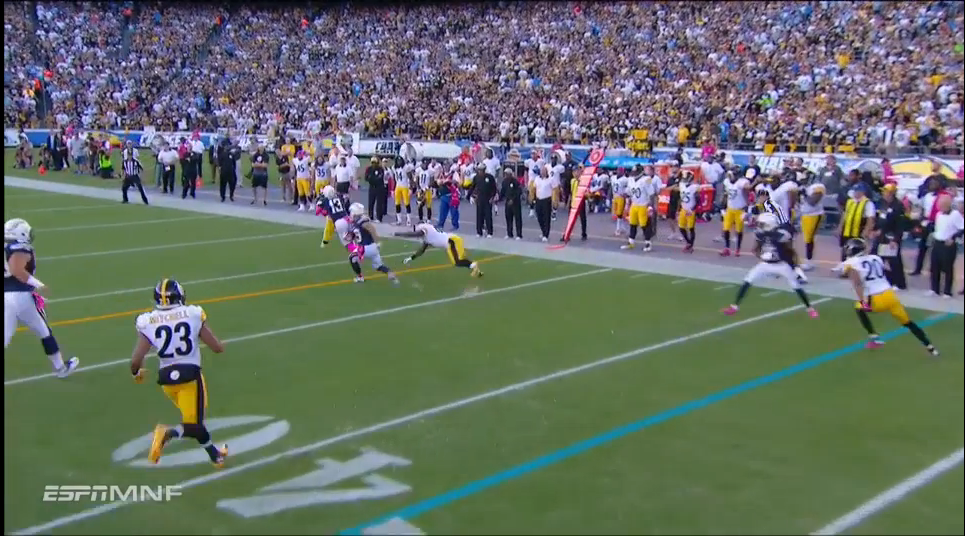 After a thrilling 24-20 victory over the San Diego Chargers last night, I’ll admit I wasn’t exactly looking forward to continuing to shine light on an overarching negative theme of the Pittsburgh Steelers season, but missed tackles were again a major issues on Monday night.

Here’s the individual breakdown of the Steelers 18 missed tackles, the second-most they’ve had in a game this season:

Timmons’ four missed tackles tied Allen (vs. St. Louis) for most whiffs in a single game this season. Williams’ miss was his first of the season on defense, as were Cockrell’s two misses. Allen played just eight snaps, but still managed to add to his missed tackle number for the year.

Danny Woodhead is admittedly a very difficult man to bring down in the open field thanks to his elite elusiveness, but Timmons and Cockrell missed badly on the Chargers first drive of the game, with the latter’s technique so off he ended up with a fist-full of facemask.

Timmons isn’t quite as agile as he once was, so he’ll need to learn to take smarter angles to the football to avoid running himself out of plays like he does here.

Blake is quickly becoming known in Pittsburgh for his poor tackling, and part of the reason (as Alex Kozora likes to point out) is how clunky his footwork is getting out of his backpedal. Can’t make this stop against Keenan Allen for that reason, and the fact that he struggles to move laterally.

Blake’s form as tackler leaves a lot to be desired too, often throwing a shoulder at players rather than wrapping and driving ball carriers with a sound target area. For a guy who clearly isn’t on the field for his coverage abilities, it isn’t a good look to be leading the team in missed tackles.

So the Steelers starting secondary (Gay, Blake, Will Allen, Mitchell) have combined for 34 of the team’s 84 missed tackles this season. The ugly numbers from the secondary have allowed teams to pile up yards after the catch against the Steelers, as exhibited in the GIFs above. Who would have thought Mitchell would be the tackling star of the group?

The Steelers are now on pace for 268 missed tackles this season by my count, which would dwarf the 107 misses from last season according to PFF. It should be noted I had them at 66 misses heading into last night’s game, while PFF had them at 55, a number that still led the next closest team in the league by nine.

The good news is that the vast majority of misses are relegated to four players, so the issue is controllable. Pittsburgh’s defense has been so impressive since Week 1, that if they can fix this major issue, I think we’ll see their success rate climb even higher over the next couple of weeks. But for now, this continues to be the defense’s biggest struggle this seas only far.