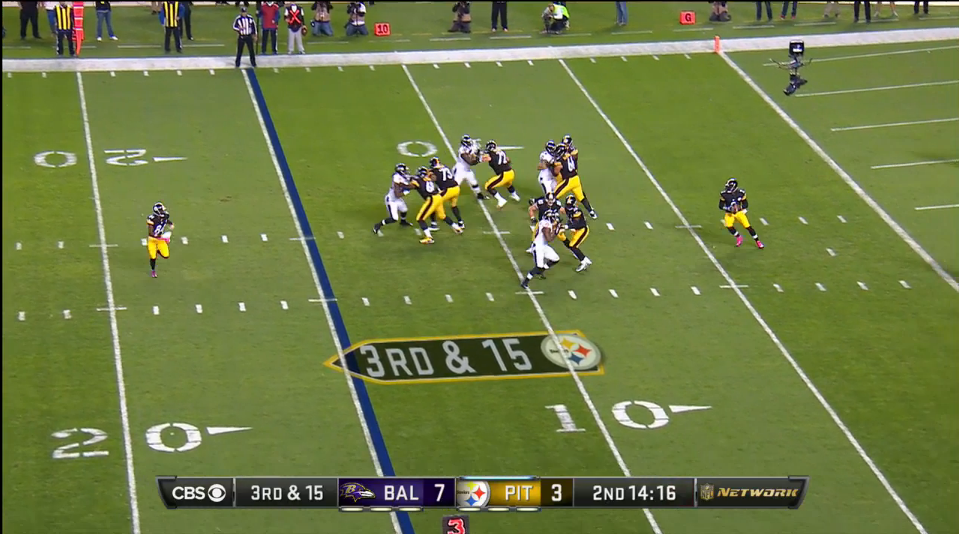 When Antonio Brown failed to produce at least five catches for 50 yards for the first time in 35 straight games, I can’t say I was surprised. I had mentioned earlier in the week that Mike Vick was the worst kind of quarterback for Brown to be paired with, but I didn’t really elaborate on why that might be the case. Today I’ll attempt to break it down for you.

Brown can win in multiple ways as a receiver, one of the things that makes him so valuable, but his bread-and-butter is route-running and separation techniques, two traits that have made him the best receiver in football for over two seasons now. Brown is exceptional at creating slivers of separation subtly, so that accurate quarterbacks consistently have a throwing window other receivers simply can’t create. Timing and accuracy are vital details for the quarterback in this relationship, able to take advantage of the space Brown creates before the defense can recover.

That’s what makes this duo such a rough pairing for Brown. Vick’s career completion percentage is an abysmal 56.3%, consistently showing a brutal success rate as a short-intermediate passer. He’s always had play-action passes and deep balls that made up for it (to some extent), but when Vick has to rely on timing and brief passing windows for success, the scenario is unlikely to go in the offense’s favor. Here’s a few examples from Thursday’s game. 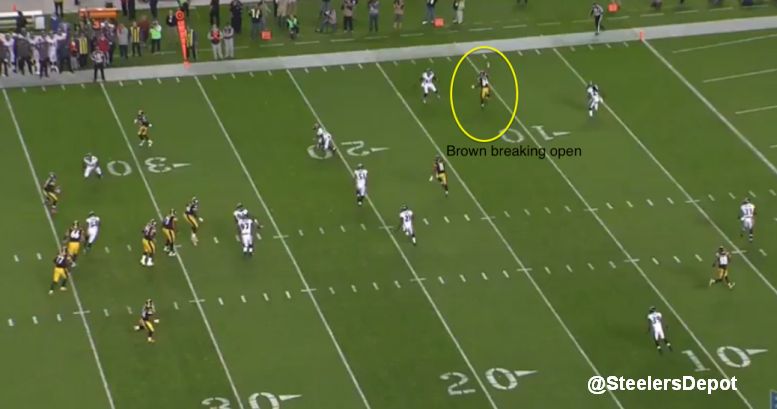 Brown gains a yard or two of separation between the corner and the safety on the corner route, but Vick doesn’t make the throw. I don’t fault Vick at all, that is a very tough window that probably only a handful of quarterbacks can fit the ball into. Ben Roethlisberger is one of them, but Vick is definitely not. Knowing his limitations, Vick simply tucks the ball and runs, though I have major issue with him ignoring Le’Veon Bell wide open in front of him for a first down.

That type of throw, the one that helps display what makes Brown so unique and special as a receiver, is one that simply isn’t in Vick’s repertoire. The ability to drop touch throws in the bucket has never been a strength of the 13-year veteran, an unfortunate truth for Brown’s game.

Even a simple crossing route where Brown is wide open displays the hindrance of Vick’s deficiencies on Brown’s game. Put the ball out in front of Brown, where the receiver can continue his momentum forward and pick up a substantial gain after the catch. Instead, the easy throw is behind Brown, forcing him to turn all the way around and giving the defense a chance to gather themselves and keep the gain to six yards.

Even vertically, where you’d think Vick would be at his best, the quarterback misses a chance to hit Brown for a big play down the field. 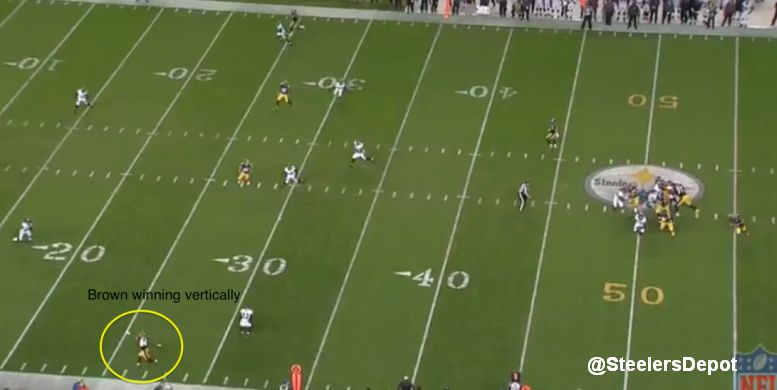 Brown breaks free for what should be an easy throw for a big gain, but here is where Vick’s struggles with mechanics come in to play. While he is a great athlete who can get outside the pocket thanks to his quickness, Vick still struggles to gather himself, gets his shoulders square to the field, and make this type of a throw. Re-setting your base as a passer after extending the play is very difficult to excel at, something that makes quarterbacks like Roethlisberger and Aaron Rodgers so great.

The biggest issue here is Vick abandoning the play’s structure too early and escaping a relatively clean pocket against a well-handled four-man rush. His pocket presence has always been a major weakness, and here it prevents him from being able to find Brown for a big play right before the half. Side note, also no idea why Vick pump fakes and then passes up on a wide open Bell as a check down option again here.

When Vick does throw with accuracy and timing, the result is beautiful. His best throw of night came as a result of utilizing these traits, making a gorgeous throw to Brown on a nifty deep out to set up a field goal before halftime.

See the anticipation from Vick, releasing the ball before Brown even gets out of his break? That’s the type of connection Roethlisberger and Brown have made a living out of over the past few years.

If only that type of anticipatory passing was more consistent in Vick’s game, but alas, he’s never been able to portray that ability on a regular basis.

Same concept, Brown comes out of his break anticipating the ball’s arrival, but Vick’s throw is late and the receiver can’t get both feet down inbounds on the catch. Because Vick has worked hard to steady his mechanics in order to become more accurate, his throwing motion is more sound than it has been in the past. Unfortunately the movement has also become slower and more methodical as Vick attempts to guide the ball to the desired location. If you were to slow down and zoom in on this pass to Brown, you can see how Vick cocks his arm in an elongated release that keeps the throw on target, but mangles the timing of the pattern.

Even if a quarterback consistently masters the timing and accuracy of a throw, the ability to release with velocity is extremely important. Vick was obviously inaccurate on his throw to Brown on the failed fourth down play in overtime, but the ball also comes out of his hand all wrong, lofted into the air rather than driven to Brown’s numbers as it should be.

Some of these throws just aren’t in Vick’s wheelhouse, while others are plays he needs to make but consistently hasn’t throughout his career. Of course, some will say that these examples make it clear that Brown is reliant on Roethlisberger for his success and production as a receiver. That idea is laughable to me, as Brown excels at getting open and creating separation above all else, probably the most important aspect of playing wide receiver. Any receiver is in need of a quarterback who can get him the ball in an ideal fashion, regardless of how talented they are.

And while Brown is never going to dominate contested catches like Calvin Johnson and A.J. Green due to his physical stature and length, he’s still good enough to produce despite Vick’s deficiencies. I don’t expect him to lack production every week that Vick is starting, but several plays that he and Roethlisberger consistently connect on will likely be absent from the box score. Expect Martavis Bryant’s vertical abilities and off-the-charts catch radius to be the type of fit Vick clicks with right away, while Brown continues to bid his time and make the plays he has a shot at until Roethlisberger returns.