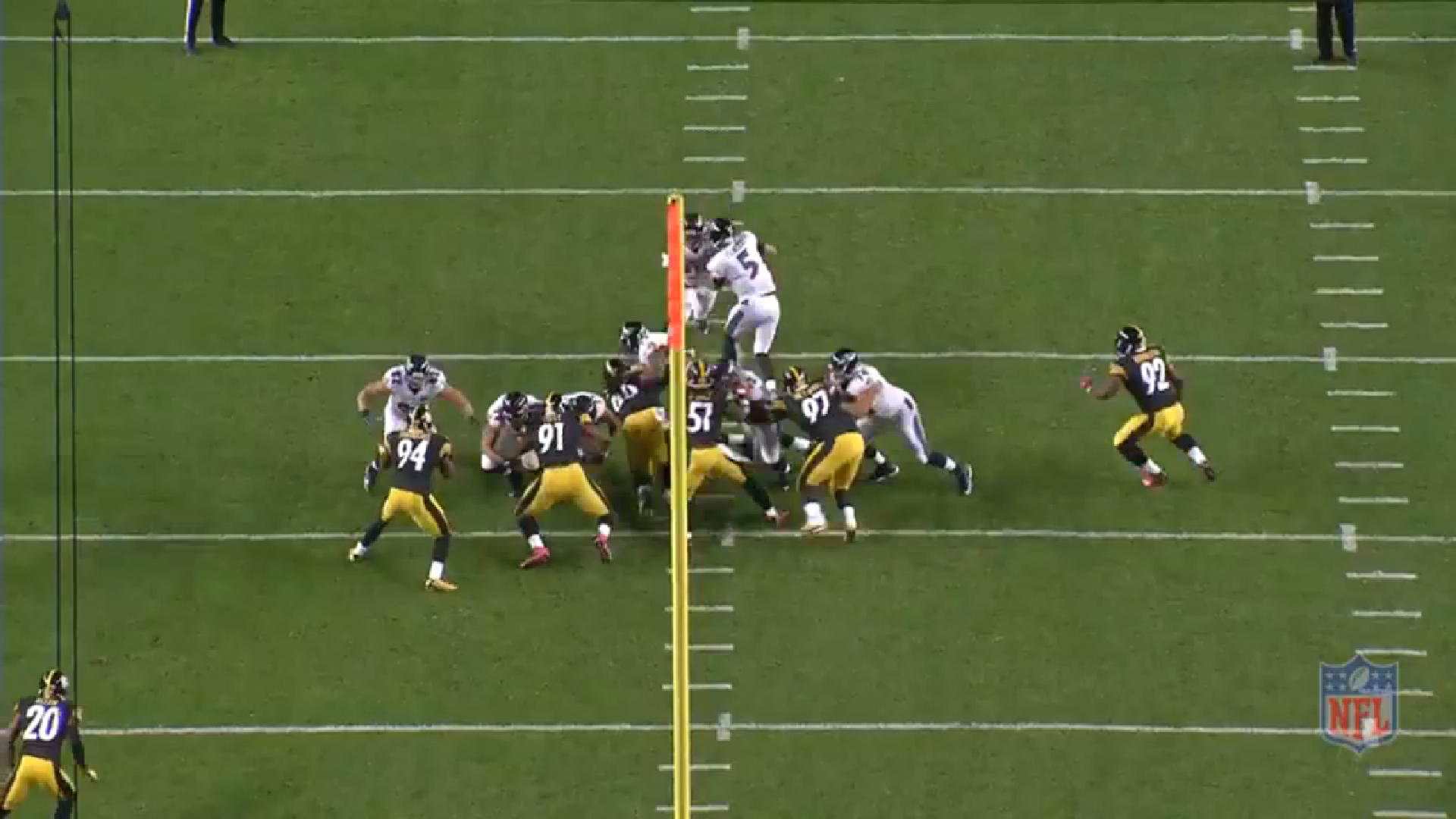 Pittsburgh Steelers nose tackle Steve McLendon had his worst game of the season against the Baltimore Ravens—and no, it wasn’t indicative of Justin Forsett’s 150-yard performance—so perhaps it’s a bit unfair for this to be my first breakdown for him of the season.

It’s also a bit surprising, considering the way that he largely handled Ravens center Jeremy Zuttah the last time these two teams met in the postseason, on multiple occasions single-handedly blowing up plays by driving the center back into the running back or quarterback.

It was Zuttah who often got the better of the matchup in this game, however, or at least drew even, as McLendon did not have a substantial impact on the running game, and by the fourth quarter the Steelers were feeding the Ravens a steady dose of nickel while nursing a small lead.

That’s not to say that McLendon is the culprit, or even a culprit, in the defense’s worst rushing performance of the year. According to Mike Tomlin, the defense was told to stop the play-action pass, which had the secondary largely ignoring the run. McLendon was not on the field for pretty much all of the Ravens’ significant runs in terms of yards gained.

An example comes late in the first quarter, with the Steelers able to convert a third-and-one with a four-yard gain up the middle with the left side of the offensive line flowing down and crashing right. McLendon tried to disrupt the running lanes by penetrating, but Zuttah neutralized him by knocking him to the ground.

Early in the second quarter, on the Ravens’ first play of the drive, the defense actually managed to stop Justin Forsett for a loss, but McLendon had no impact on the play, and in fact was driven a bit downfield by Zuttah.

The play was a zone run to the right, with Zuttah primarily working on his own against McLendon, with small chips by both guards at the beginning and end of the play. The end result saw him standing about five yards away from the ball. While he was trying to flow down to the play, it was obviously not his intention to give up quite that much ground.

Later, midway through the third quarter, on the other hand, McLendon did manage to disrupt the run by gaining penetration, and nearly made the tackle himself before Zuttah chipped him out of the way, but the defense regathered to make the tackle.

Late in the third quarter, the veteran nose tackle won the leverage battle against Zuttah, holding up the play side A gap and forcing Forsett to try to bounce the run one hole to his right, but, again, the defense was able to swarm and make the play from behind after just a pickup of one yard.

On the final offensive play of the game, the Ravens faced a third-and-one at the Steelers’ 35-yard line. Failure to make the first-down meant that they had to attempt a 52-yard field goal to win the game. While that ended up being the result, the defense deserves credit for making the game-winning field goal a challenging one.

McLendon was one of several players to gain penetration along the line, narrowing the access points for Forsett and limiting him to taking the right side of the field, where he was corralled for no gain for force a fourth down.