The Pittsburgh Steelers defense has been without Ryan Shazier for the past two games, and with the news of him going back into a sling yesterday, there’s reason to wonder if that theme might continue for another week.

Both got a lot of playing time in the last game, so we can break them down separately. Spence is the starter and sees the lion’s share of snaps during the games, though Williams got a healthy workload in comparison to the game before.

One thing that I did notice about Spence is that the Steelers used him a fair bit away from his traditional spot, either rushing him off the edge or lining him up in the slot. It seems that they like to play him out of the box when given the opportunity, and to be fair, he has produced at times.

In the middle of the Ravens’ second drive, which ended in a touchdown, Spence was involved in three consecutive plays, first making the tackle down the field after an 11-yard run, and then holding up the back for four yards on second and five.

In between, we saw Spence put out over the slot on the tight end on what turned out to be a screen pass to Steve Smith. The Ravens doubled on him with the tight end and an extra wide receiver, but he set the edge well and nearly cleared the block to make the tackle, managing to get two hands on Smith before the tight end pushed him out of the play.

Late in the first half, after Williams logged a couple of possessions, the Steelers inserted Spence back into the lineup to close out the second quarter, and rushed him off the edge on three straight plays, which resulted in a three-and-out, largely thanks to his unblocked sack off the right edge on first down. The quarterback clearly failed to identify the blitz and find the hot read.

One of the issues that Spence does have at times is finishing tackles, as he missed a couple of them in this game. One of them came late in the third quarter on what should have been an easy clean-up tackle on Smith after an initial tackle attempt, but he whiffed. He also just missed the back in the backfield a few plays later. 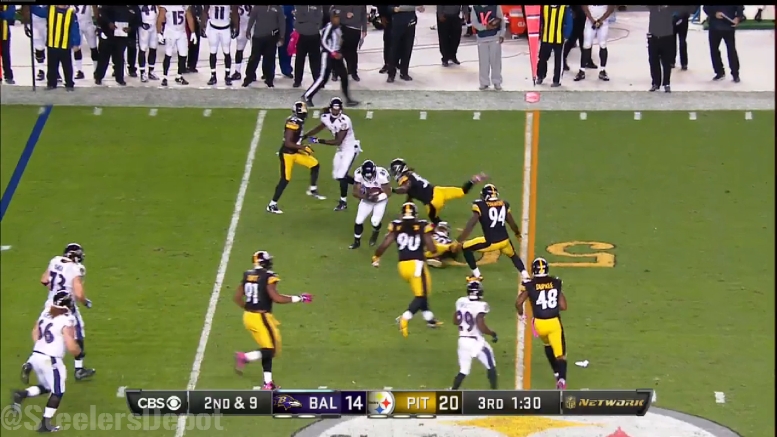 On the second play of the fourth quarter, however, he showed some of his best qualities, combining a quick diagnosis with the ability to weave through traffic, squirreling his way through large bodies to make the tackle after a two-yard gain.

In the middle of the fourth quarter, Spence misplayed a running play that went for a 22-yard gain because he never got over to fill his gap. With the Steelers in the nickel, with the two ends skewed right and the two outside linebackers skewed left, Spence should have slid over to fill the A gap between the two ends, but never did, resulting in the easy, untouched explosive run.

After the Steelers missed a field goal late in the fourth quarter, the defense made four consecutive stops to get the ball back to the offense. On first down, Spence carried the tight end vertically with help coming late over the top. His coverage gave a narrow window that the quarterback and tight end could not find.

The fourth-year linebacker ended the drive once again coming off the edge, ultimately getting to the quarterback, though he was not credited with the sack, and the pressure owed a lot to the coverage on the back end. Still, Spence has been showing progress as a pass rusher since late last season, and this is another good sign.

Sean Spence is not the ideal option in the starting lineup, which is why Shazier occupies that spot, but his instinctual play makes him a good option as a reserve. I didn’t even mention his special teams stop of a fake punt in this breakdown. Still, the sooner Shazier gets back, the better.