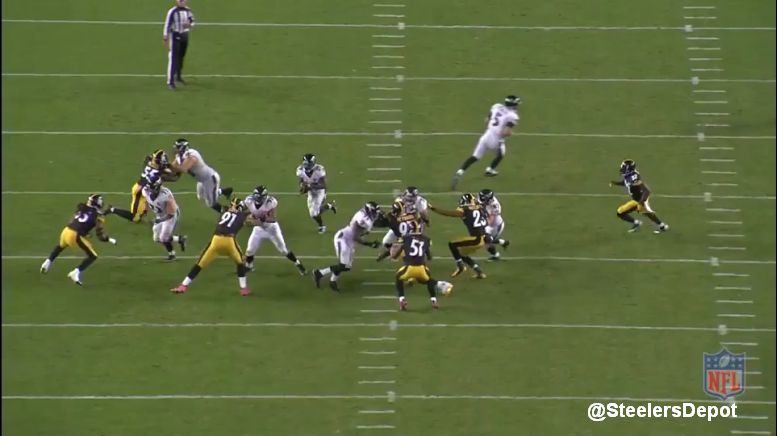 You live by the sword. You die by the sword. It’s a stupid, trite phrase but one I’m turning to going through some of the Pittsburgh Steelers tape from Thursday’s loss.

Yesterday, we broke down Ross Cockrell’s interception with Dick LeBeau’s Storm Fire Zone blitz. It was a beautiful play call that worked to perfection, leading to one of the easiest interceptions Cockrell will ever make. When it works, we – I – love it. When it doesn’t, it’s easy to throw stones at.

The times it didn’t work was when the Baltimore Ravens decided to run the ball against this blitz. And the two times they did resulted in 55 yards.

This is partially a LeBeau holdover. I saw it ran under him last year. They ask the linebacker, in both cases of the long runs Lawrence Timmons, to immediately get his eyes to cover the #2 receiver. They don’t ask him to read his run/pass keys. Snap, eyes to #2, turn your back and cover.

If it’s a pass, there’s no issue. You get a jump on coverage and no one thinks twice. But when it’s a run, there are some serious breakdowns. By essentially robbing the linebacker of his run key, he can’t flow down the line and chase the ball. It stresses the open side linebacker while creating huge cutback lanes.

On the first example, a 33 yard Justin Forsett run, Timmons darts his eyes to #2 off the ball. It’s a run, taking him out of any run fill. 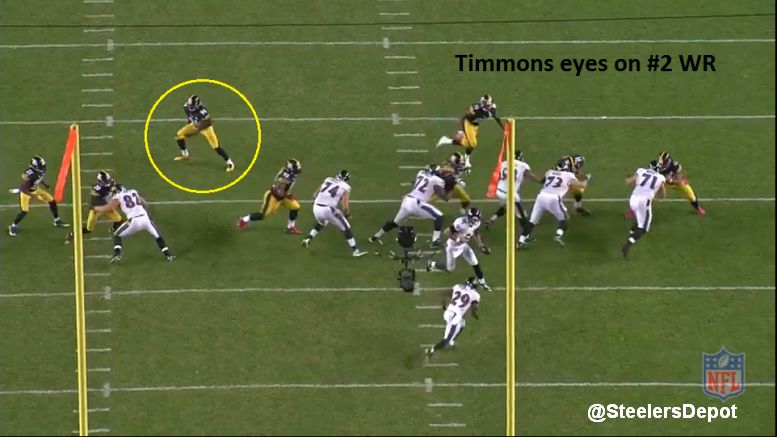 The Steelers run fills are: 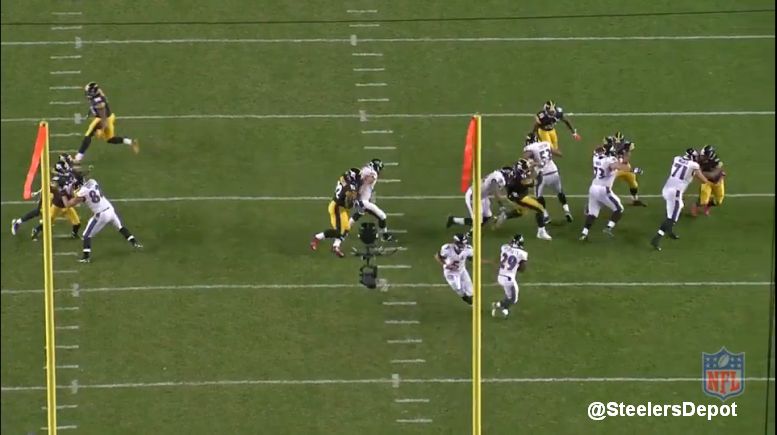 More importantly, with Timmons out of the equation, it matches four blockers on four defenders. Even numbers is a win for the offense. No unblocked defender to have a chance to work clean and make a play. And with the Ravens’ zone scheme predicated on the running back reading the hats of the lineman, Forsett is going to find the gap. 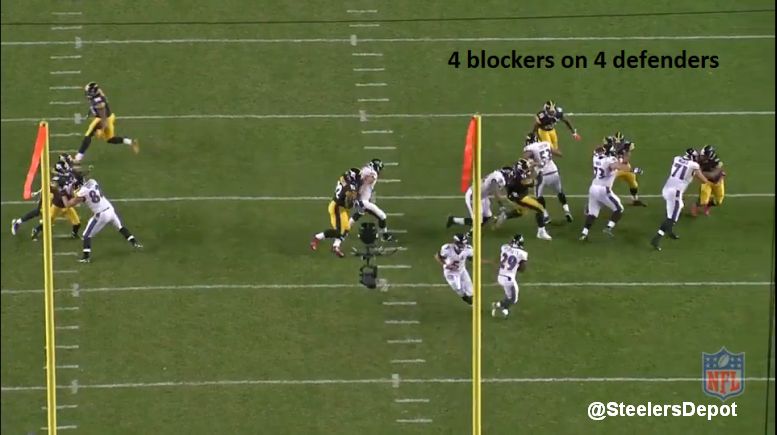 He hits the backside B gap and cuts upfield. If Timmons is able to flow down the line, he’s in position to make the tackle. Instead, there’s a vacant space and with the safety blitz, plenty of room for Forsett to get into the second and third level. 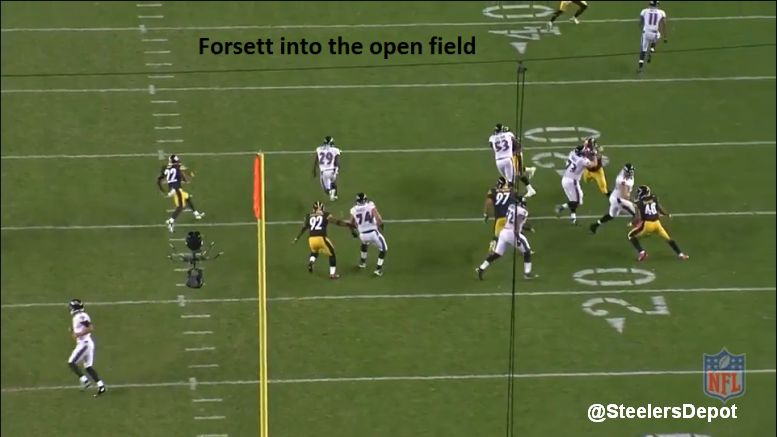 The Steelers try to tweak their scheme later in the game. It’s the same blitz call with Timmons getting his eyes to the receivers and taking himself out of the run game. The Steelers stack their outside linebackers away from the blitz, creating an extra frontside defender. Instead of asking Spence to crash hard down the line, unable to make a play on any cutback lane, he shuffles and reads. 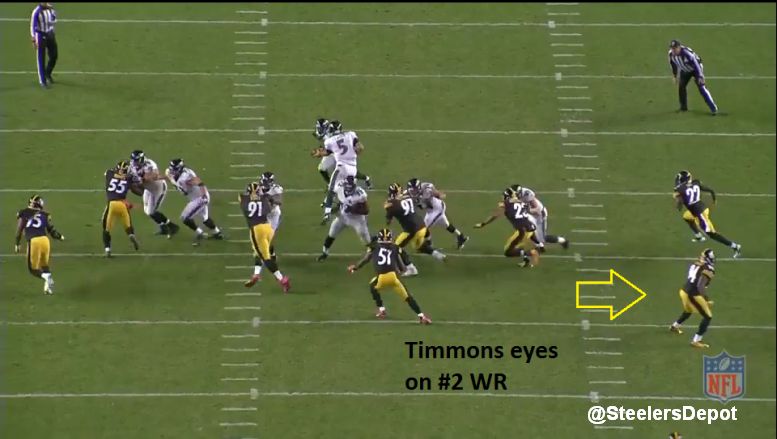 The run fills are:

Spence fails to take a good first step and get on the track, losing his gap integrity and getting sealed. Having Timmons with him would let Spence play faster, knowing he isn’t the only second level defender up the middle. He can be responsible for one gap instead of over-thinking and trying to cheat where the running back might go. It turns into a 22 yard sprint. 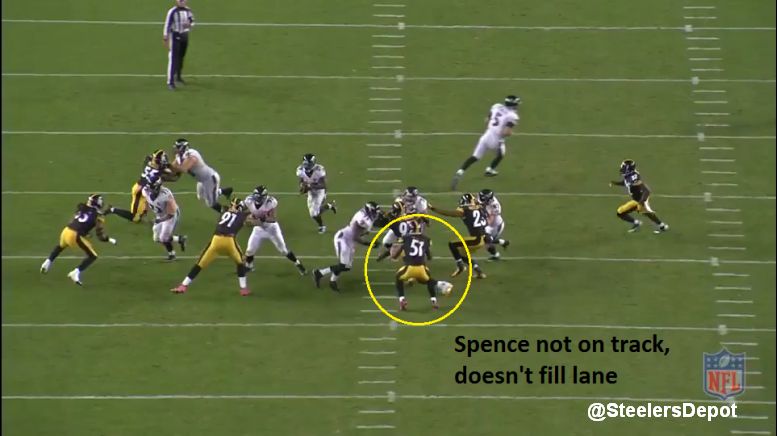 To Butler’s credit, it’s an attempt at tweaking the scheme. And I can appreciate that. But it’s just muddying things up when there’s a simple solution.

I love the concept. It works and Cockrell’s interception proves it. But it has to allow every player to read his run/pass keys and it’s not doing that for the strongside linebacker. I’ve seen it enough times to know it isn’t individual breakdown but scheme-related. It has to allow that player to get his eyes on the hat of the offensive line and only then if he reads pass, drop into a hook zone in coverage. It’ll prevent this team from getting gashed like this, crucial blow to the Steelers’ run defense.