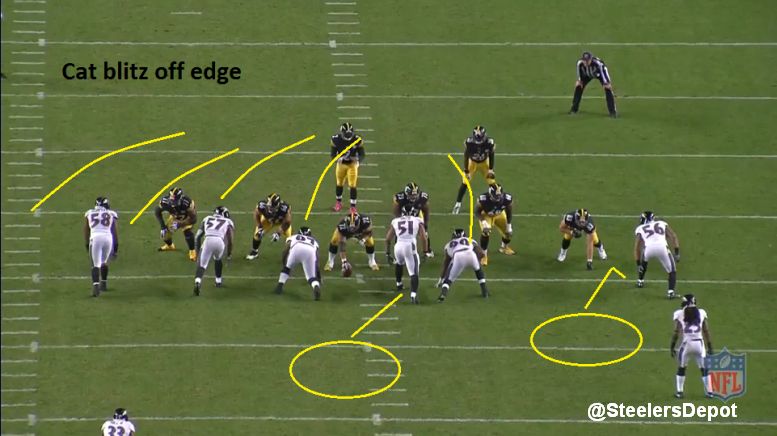 A closer look at the four sacks allowed by the Pittsburgh Steelers in Week Four.

1. 3rd and 5, 7:35 2nd. 12 personnel. Seven block against a five man rush. Linebacker Daryl Smith, #51, is going to blitz and eventually slide down two gaps. It’s five blockers to that side, a four man rush by the Baltimore Ravens, so in theory, there should be no issue picking it up. 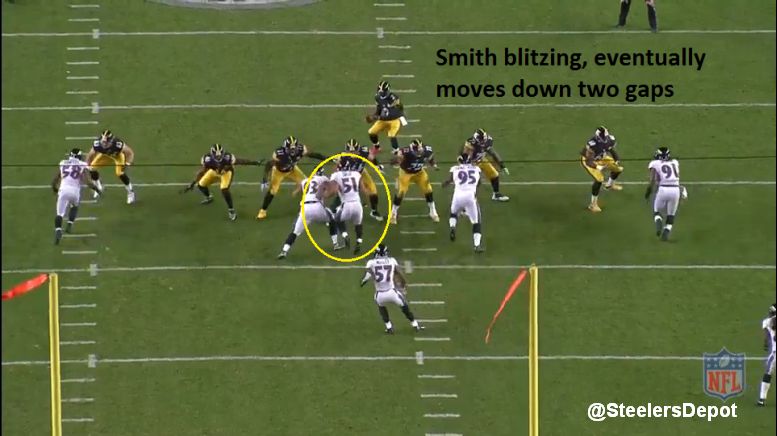 But Ramon Foster is so focused on getting his eyes to Kelvin Beachum, he never spies Smith slanting down and coming through. It’s common and natural for guards to look for and give help, especially with no player immediately in his gap, but Foster doesn’t do a good job of showing active eyes and feeling the pressure. 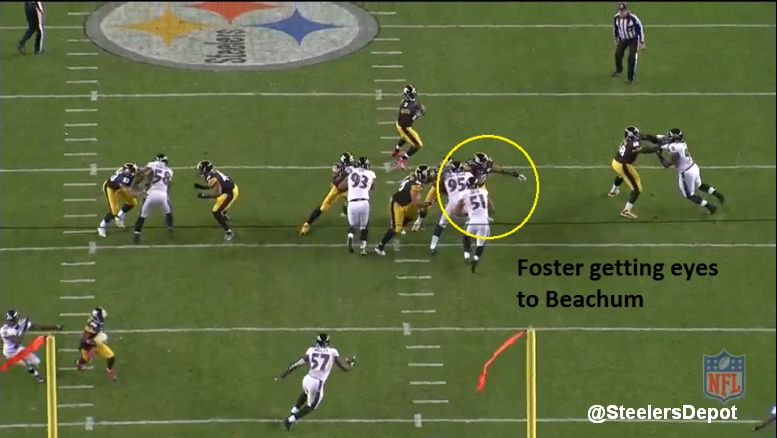 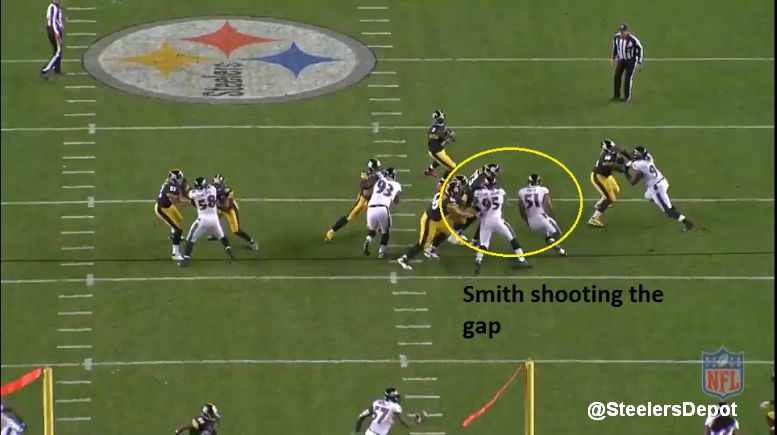 By the time he realizes Smith is there, the linebacker is already past and Foster can only lunge. 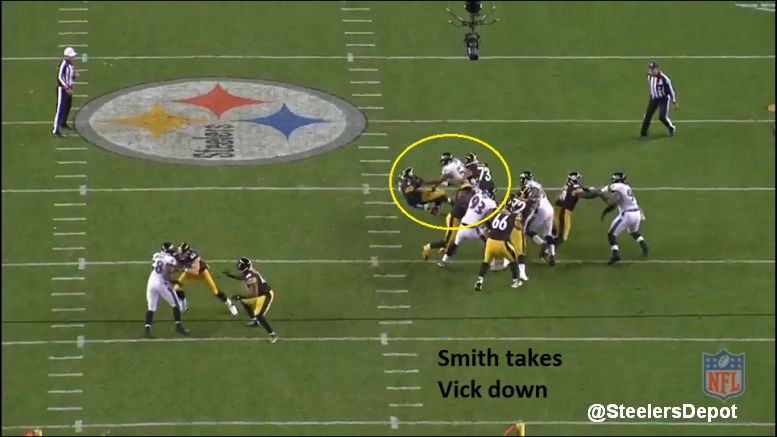 2. 2nd and 10, 7:20 3rd. 12 personnel. Eight blocking a five man rush. Half roll to the left for the left-handed Michael Vick, pulling the left guard to create a false run key. Foster eventually gets beat to the inside by Z’Darius Smith but it’s hard to fault him here. It’s Vick who needs to get the ball out quicker. It’s a two man route with Antonio Brown the first read, crossing the safeties face and realizing the ball isn’t there, begins to work back to Vick. Ditto with Darrius Heyward-Bey on the other side, breaking off his route and coming back to his quarterback. 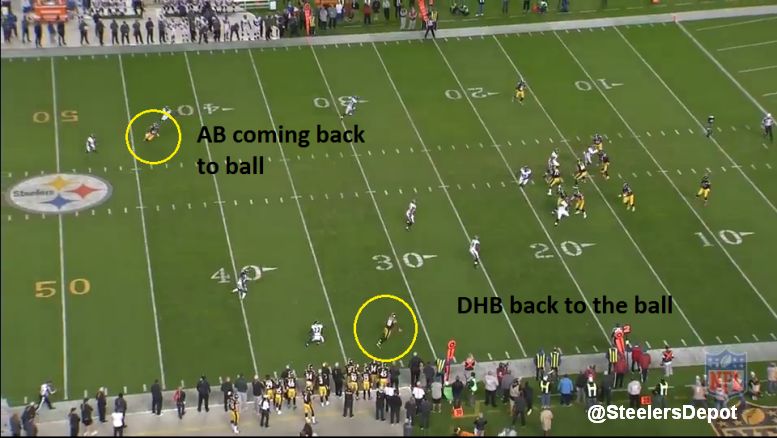 Vick doesn’t pull the trigger for Brown and doesn’t get his eyes to DHB across the field. Heck, he doesn’t even look for Le’Veon Bell out of the backfield, a viable checkdown option if Vick gets him the ball quickly before the defender closes.

3. 3rd and 16, 6:37 3rd. Six to block, plus Bell check releasing versus a four man rush. Steelers have had several sacks given up despite having one to two more blockers, making these breakdowns particularly frustrating to see. However, this isn’t on the offensive line. From snap to sack, 4.8 seconds elapsed, an eternity for the OL to block. Cody Wallace technically “gives up” the sack but it’s unfair to pin it on him.

It’s a three man concept with a clearout route by #1 at the top and a corner route by the slot receiver. Neither option is open – the vertical route is well defended and the cornerback is playing to the hip of the corner route. The Ravens are essentially matching three over two, probably a “Fist” concept of matching. 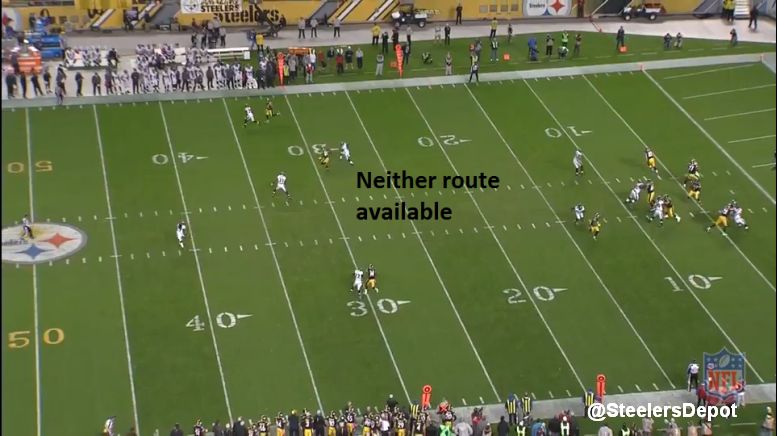 As soon as Vick sees that, he has to look for another option. There’s no chance those routes develop. It’s well-defended. Vick has to look for his checkdown but fails too, missing a relatively open Bell out of the backfield. There’s no guarantee he gets the first down, 3rd and 16 is a long ways to go, but it’s a chanece to get the ball in the hands of a playmaker and most importantly, not taking a sack backed up near your own end zone in a 20-14 game. 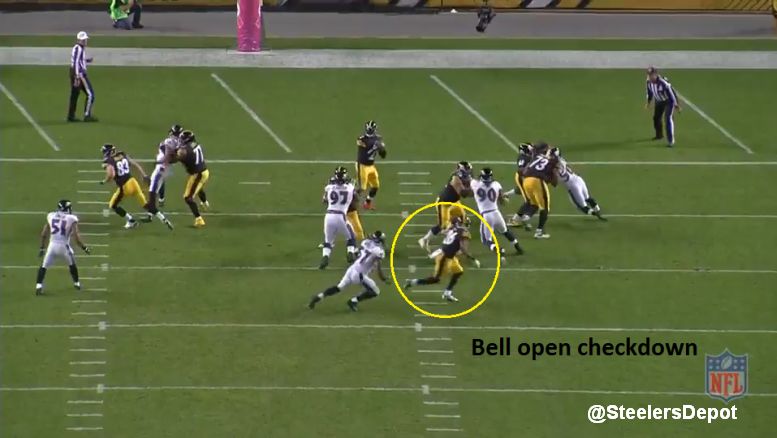 It’s another example of Vick staring defenses, not reading them, and taking an irresponsible sack.

4. 3rd and 8, 3:02 3rd. 11 personnel. Five block plus check/release against a four man rush. Overload cat blitz from the Ravens, bringing cornerback LaDarius Webb (#21) off the edge and dropping the away side linebacker into coverage. Stuff Baltimore is famous for. The Steelers actually slide to the blitz, but it’s still a four rush versus three lineman pickup.

On first glance, it looks like it’s Bell’s fault. He should be picking up the free rusher. But that free rusher is the dangerous Elvis Dumervil. Not someone a running back should ever be asked to pick up by himself. 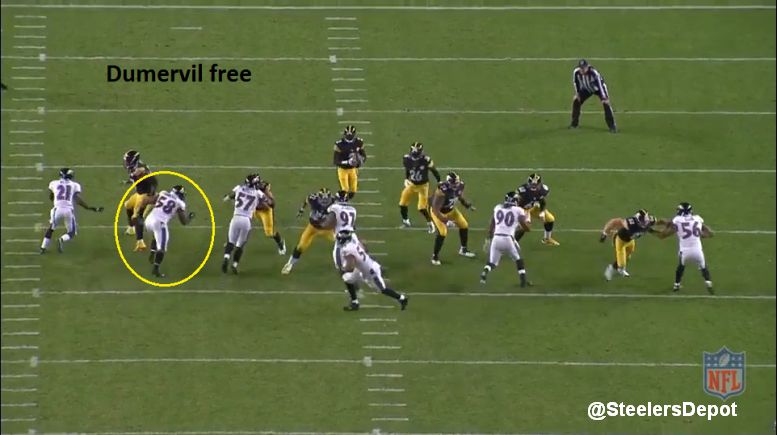 The old saying goes: Don’t put the players who don’t make their money protecting against their players who make money pass rushing. In other words, a RB vs OLB is a terrible matchup.

Which tells me Dumervil isn’t Bell’s responsibility and absolves the back of fault. Bell likely has a dual read of #51 and #57, picking one up if they rush (if both comes, it is a hot read for the QB, telling him to get the ball out quick because there will be a free rusher).

#57, C.J. Mosley, does rush but is picked up by David DeCastro. It gets tricky here to understand who is at fault. It’s reasonable to assume that Bell quickly saw #51 drop and a body in front of #57, allowing him to release into his route. Yes, Bell is probably wondering why one of his assignments is picked up, but in the moment, you just roll with it. Bell no longer has an assignment in protection so you just release. Ask questions later. 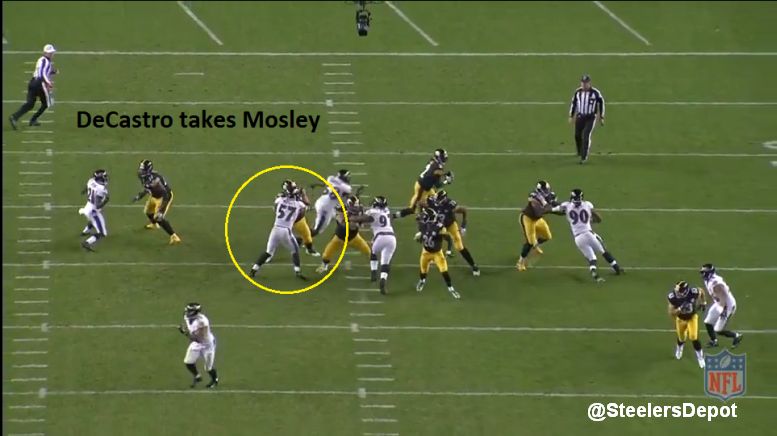 The next question becomes who is responsible for Dumervil. Is there a chance Marcus Gilbert should let Bell have the cornerback? Maybe but based off what I know about protection schemes, it’s more probable than not Gilbert picked up the right guy. Like I wrote, the back usually has a dual read on the linebacker and you can watch him staring them down, not the cornerback, in the GIF below.

It means DeCastro picked up the wrong player, Mosley when it should have been Dumervil. It allows him a free path to Vick, taking him down.