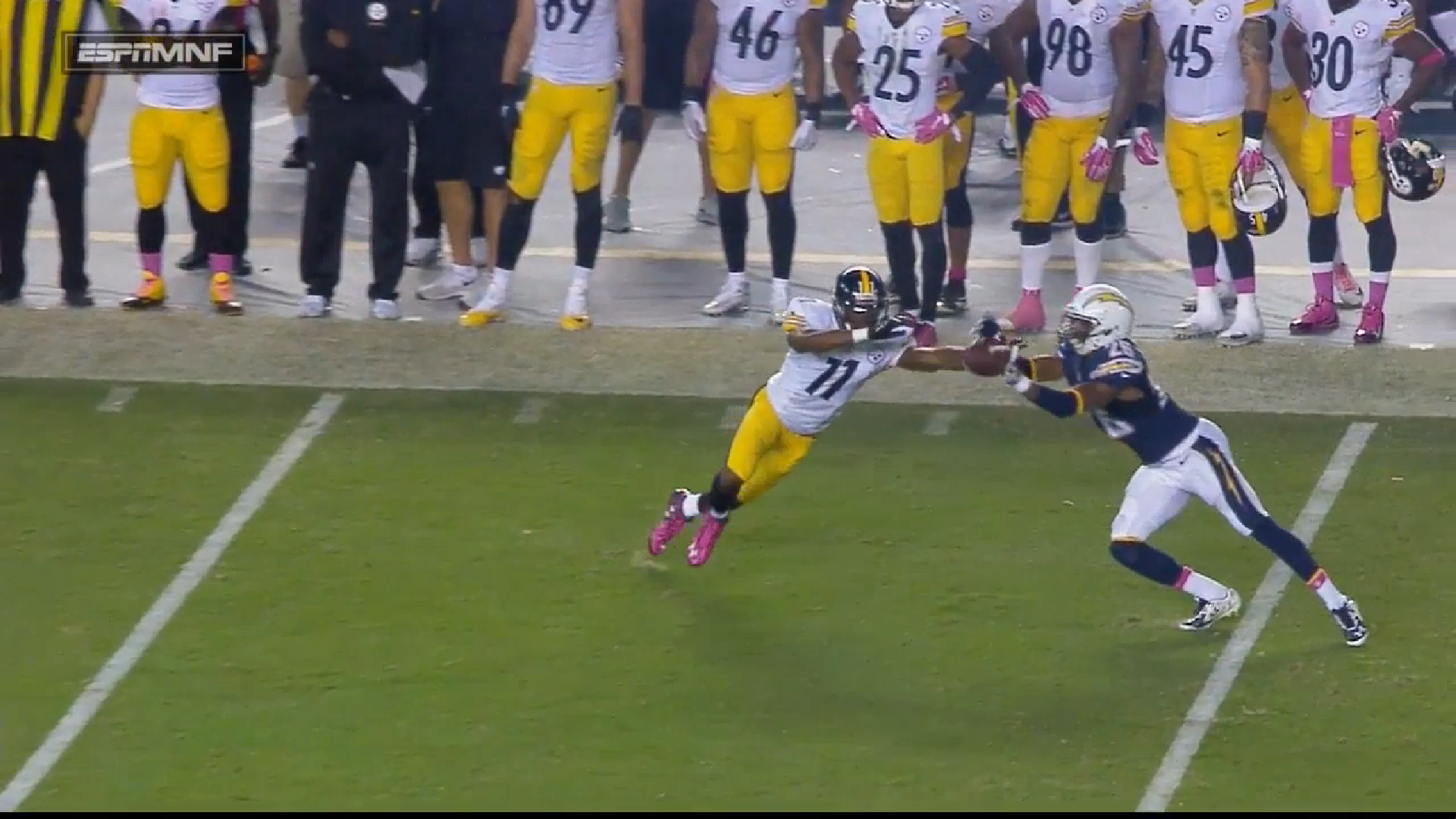 The Pittsburgh Steelers could technically be a missed field goal or two away from posting a 3-0 record in the nine-plus quarters in which Mike Vick has filled on at quarterback in the absence of Ben Roethlisberger, who returned to practice this week.

But they could also be a few opportunistic snags away from going 0-3 in that same span, during which each game was decided by less than a touchdown. I have identified at least passes out of 57 thrown by Vick that could have been intercepted, not including the hail mary pass that was indeed picked off.

The Chargers defense had at least three opportunities to net an interception on Monday night that they failed to take advantage of, with the first coming late in the first quarter. On a second-down play, as Vick scrambled right to escape pressure, he fired an ill-advised pass aimed toward Antonio Brown while cornerback Jason Verrett had the position to jump the route, which he did for what should have been an interception.

Midway through the third quarter, Vick looked for Darrius Heyward-Bey on third and 10, throwing across his body. The ball was behind his receiver, but was placed well for safety Jimmy Wilson to make a play on it. The ball bounced off of his outstretched hands as the Chargers defense passed on its second opportunity for a meaningful interception.

But it was not their last chance, as a third opportunity came early in the fourth quarter as Vick targeted Markus Wheaton on third and six. Facing pressure in the pocket, the quarterback’s pass drifted in front of his target, forcing Wheaton to play defensive back to ensure that cornerback Patrick Robinson did not snare the pass intended for him.

There was a fourth pass late in the game that also had an opportunity to be intercepted. Under duress, Vick heaved a deep pass in the direction of Heyward-Bey that fell well short of its intended target, as he did not have the form to get the ball that far down the field. The defensive back was much nearer to the ball.

We can also look back to the Ravens game from the week prior to see some opportunities that Baltimore missed in picking off the ball, both in overtime, though they ended up winning the game regardless. The first came on the first play of overtime, when Vick threw an ill-advised downfield pass to Heyward-Bey, which he fortunately seemed to realize as it came out of his hand. It never reached its destination, skipping well short of his target, on a ball that would have inevitably been picked off.

On that same drive, Vick fired a third-and-two pass off to Brown inside the numbers, but he placed the ball away from the receiver, where the defensive back had a better chance of making the catch. the Steelers ended up turning the ball over one play later anyway.

We can even go back to the Rams game to find Vick nearly turning the ball over through the air. In the fourth quarter, cornerback Lamarcus Joyner may have been deprived of an interception thanks to an uncalled offensive pass interference penalty on Brown, who pushed the defensive back and as a result had to lean back to make an attempt at the interception, which he should have been able to make anyway.

The Steelers are facing their biggest test thus far with Vick under center with respect to going up against an offense that can put up points, and they absolutely cannot afford to give them extra opportunities while depriving themselves of the ones they do get.

Vick needs to do a better job of directing his passes and making decisions, because he won’t keep getting as lucky as he has, especially not against a secondary as opportunistic as Arizona’s.