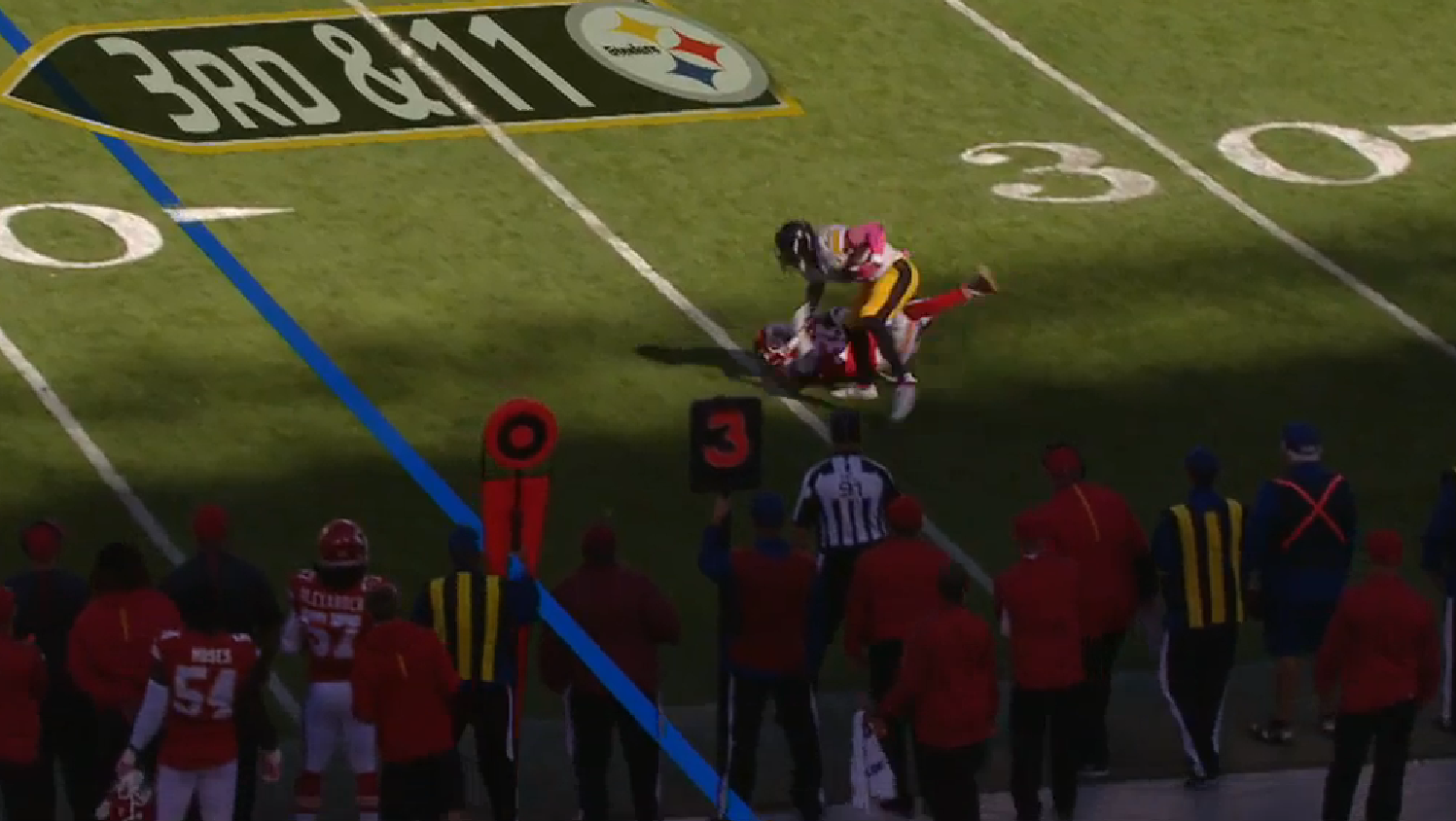 Pittsburgh Steelers running back Le’Veon Bell gets talked a lot around here, and rightfully so. He accounts for more of the team’s offense than anybody else, setting a new franchise mark for yards from scrimmage just last year. This year, he is already averaging over 100 yards on the ground per game, going north of that mark in three of his five games played.

Beyond that, though, is the simple fact that he is just a treat to watch. You get the sense that he is the sort of player you want to relish in being able to see in his prime, right now, because not many players of this sort come around very often, who combine an impressive skill set with very tangible success.

This is my way of justifying yet another film study of Bell, highlighting some of his key plays from Sunday’s loss to the Chiefs, but I suspect there won’t be many complaints.

The first play I want to look at is the opening carry of the Steelers’ second possession, on which the All-Pro back picked up five yards off the right side. Following the zone blocking stretched out in front of him, Bell escaped initial penetration before cutting up into the B gap. After about three yards, he took a hard cut to his left that saw two defenders spill to the ground in front of him. Put simply, the man has some of the prettiest five-yard gains you’ll see in the league today.

Skipping ahead about a quarter, the Steelers tried turning the ball over to the run game on a drive that consisted of seven rushes and one pass negated by a penalty. Bell picked up six on the second carry of that drive, this time harnessing his vision and patience to find the opportune lane. The cut that he pulled on Derrick Johnson just outside the hash marks to pull back inside is something a lot of backs just can’t do.

That run, and the subsequent one for seven yards, was built upon the tone set by the first play of that drive, a 21-yard run up the middle on which he was able to catch the sideline for extra yardage at the second level. He got just the block he needed from his fullback, but he finished the run with authority, putting the safety on his back as he went out of bounds.

Late in the third quarter, it was Bell’s second run of double-digit yardage, as he picked up 11 yards up the middle again, following his fullback, who sealed off Johnson again to create a sliver of daylight off the right side C gap. A stiff arm from Bell on the first defender bought him several extra yards out as he exploded out of the hole.

The third-year back ripped off his longest run of the season early in the fourth, a 42-yarder on which he had to be caught from behind by a cornerback to be prevented from scoring 13 yards shy of the end zone.

Were it not for the fullback’s initial block on that cornerback, however, the whole run likely never happens. This was the famous power counter the Steelers have run with great effect, with David DeCastro sticking to his block on the pull and Roosevelt Nix allowing Bell to cut inside before hitting the sideline.

Once there, he provided a stiff arm for one defender and a juke for another before it was off to the races, though it was a race he lost. After all, if Bell had elite ability in every facet of the game, it just wouldn’t be fair. As it is, the level of fairness to opposing teams with him on the field is already seemingly up for debate.

Late in the game, Bell collected one of his few receptions for just seven yards, but they were yards well earned. After chipping at the end, the back settled into the flat for the check down knowing the safety would be closing. As a consequence, Bell put him into the ground with a forceful stiff arm, gaining nine yards after that, with four behind the line of scrimmage.