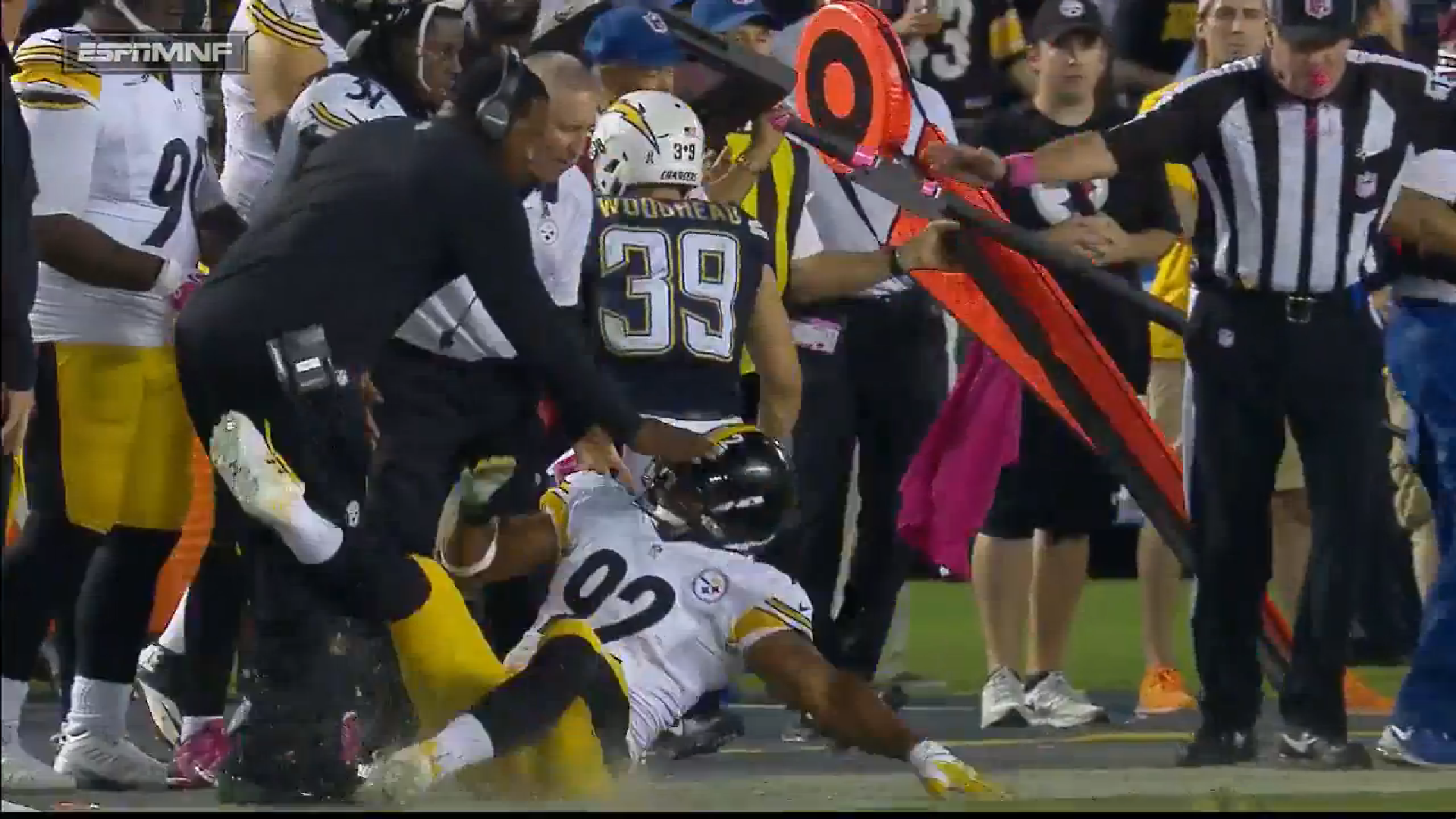 Pittsburgh Steelers outside linebacker James Harrison doesn’t look like somebody who was retired a little over a year ago. He doesn’t look like a 37-year-old, either, but he is. In spite of that, he is still playing well, and contributing, a fact that can be attributed partially to his willingness to accept a reduced role in a rotation.

He may not have quite the same impactful play that he used, at least with regularity, but he is a consistent and reliable performer for this defense at a position where such qualities are required.

He still draws holding calls from time to time, however, which occurred in the first quarter against the Chargers on Monday night. Actually, it was the left tackle who was flagged, but Harrison was held as well as he pressure Philip Rivers, though the quarterback still hit his throw, which was negated by the penalty.

Late in the first half, the Chargers were successfully driving down the field when they looked to quickly convert a third and one on a short screen pass to the running back. But Harrison snuffed out the play quickly after motioning out wide pre-snap, beating the blocking scheme to knock the back out of bounds for a two-yard loss.

Early in the third quarter, Harrison eventually got free as Rivers scrambled to his right on a third-down play, chasing the quarterback to the boundary until he ran out of room and was forced to throw the ball away.

Later in the quarter, the veteran got around the left tackle with a rip and dip move, a move that he has virtually perfected over the years. Rivers got the ball out far too quickly, however, for the pass rush to have any impact, and he completed the pass for an eight-yard gain.

Midway through the fourth quarter, Harrison won again, this time by moving inside, forcing the left tackle to set up for an inside move. As a result, his kick slide was late, and the outside linebacker got around the corner to get into the backfield for a pressure, and a hit on the quarterback, though he wasn’t the only defender getting home on that play.

Later on the same drive, he did a good job of following a one run behind his back, spinning around as the tight end tried to block him in order to get back into the play and make the tackle after a seven-yard gain.

He followed that up by making the tackle on the next play after a one-yard gain, setting the edge and shedding to make an aggressive play in bringing the running back to the ground to set up a third-down opportunity, though the defense failed to get off the field.

The Chargers ended up settling for a field goal, in part due to Harrison’s pressure forcing Rivers to throw earlier than expected, which gave the defense a chance to get in position, with Lawrence Timmons able to bat the ball down.