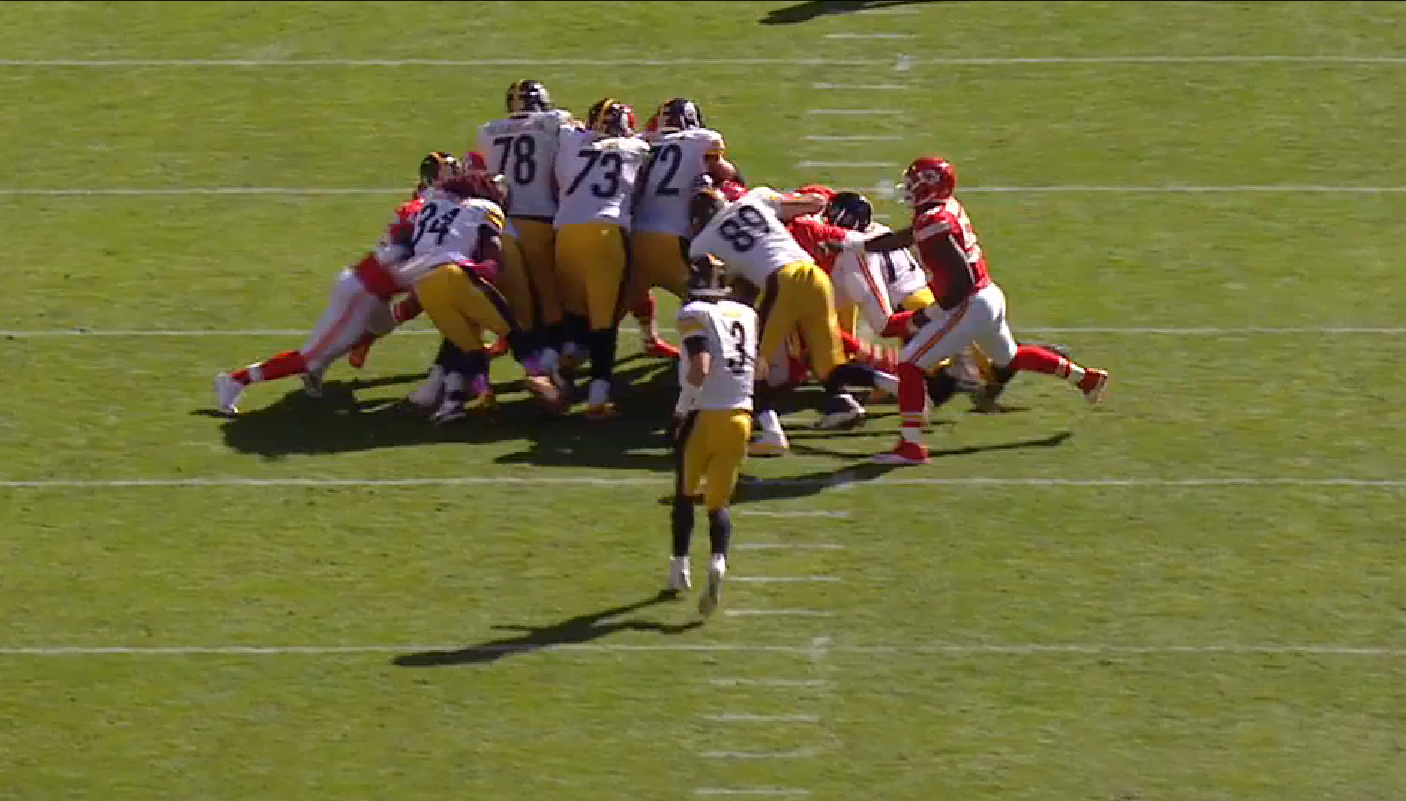 This past Sunday, something seemed amiss to me as I watched Pittsburgh Steelers running back Le’Veon Bell routinely leave the field, or at least motion out wide, in order to give way to DeAngelo Williams during short-yardage situations in the first half of the team’s loss to the Chiefs.

Later in the week, head coach Mike Tomlin confirmed that he had given Williams the role of short-yardage back for the game, but that that would not necessarily be true moving forward. Evidently it was an experiment aimed toward seeking opportunities to expand the veteran’s playing time behind the dynamic Bell.

As I wrote earlier in the week, I hold no opposition to the team finding ways to get Williams more touches, as he more than proved capable of producing while starting the first two weeks of the season. Nor would I be against finding a niche role for him.

But there is nothing in his skill set, nor his past, that especially enables him to the role of a short-yardage back. Jerome Bettis and Amos Zeroué, this is not.

Thus, irrespective of the actual results of his five touches in short-yardage work against the Chiefs, I would not be in support of a deliberate effort to pursue this role for Williams going forward. But with that said, let us take a look at those results.

The Steelers encounter their first short-yardage opportunity midway through their second drive in the first quarter. After a nifty three-yard run from Bell, he is pulled off the field for Williams. The senior back shows patience in locating the hole and then strikes, hitting the left side B gap for a six-yard gain with ease.

Just three plays later, the Steelers face yet another third and one following a two-yard gain from Bell the play before, who again vacates the field for Williams. He tries his luck in the same gap again, but no lanes open as Allen Bailey, the right end, slips away from Alejandro Villanueva, making the stop at the line of scrimmage.

Williams stays on the field, however, accompanied by a pair of tight ends at in-line blockers along the right side. On fourth and one, the veteran is able to clear outside of the right tackle as Matt Spaeth successfully seals the nearest defender, allowing Williams to pick up three yards.

And yet once again, three plays later, after a five-yard pass to set up third-and-two at the six-yard line, Williams comes into the backfield as Bell flushes out wide, motioning all the way across the formation to divert attention to him.

Williams runs a flat route before drifting as the defender covering him rushes Landry Jones. Jones lofts the ball to the former first-rounder for an ordinarily routine completion, but the back drops what could have potentially been a touchdown, or a first-and-goal at worst.

Jump ahead nearly a quarter and the Steelers find themselves in a third and four situation. On this occasion, they bring in Williams, but align him with Bell both in a sidecar formation flanking Jones.

The Chiefs have seen on four occasions that Williams had gotten the ball on third and short, last time with both backs on the field, with the offense providing the illusion that the play may go to Bell, so at least in this context, they have created doubt for the defense. On this play, Bell got the ball and picked up three yards.

On fourth and one, Bell came off the field, leaving Williams in with seven blockers, a tight end flanking each side. The Steelers ran off the left side, toward Heath Miller, but the Chiefs front was stout and closed down the perimeter as Villanueva and Ramon Foster clamped down on Bailey.

Miller was left with two defenders on the edge and could only take one, as Kansas City had eight in the box. Williams tried to spin outside of Dee Ford, but the edge defender got an arm around him and wrestled him to the ground to force a turnover on downs.

In all, Williams successfully converted two of four third- or fourth-and-one carries, only two of which were sufficiently blocked up, and failed to retrieve a very catchable fifth opportunity through the air. That is a mixed level of success at best, but even if he were successful on every occasion, there is still no compelling reason for him to be given this assignment.